Was there a Noah? (Part 2) – Testimony of ‘weeks’ in Calendars

Why are there many languages & where does the ‘week’ come from?

In my last post I looked at the convergence between the myriad of flood accounts that are indigenously preserved around the world with the account of Noah in the book of Genesis of the Bible. The Vedic account even goes so far as to say that Manu (the Vedic ‘Noah’) had three sons from which all humanity has descended. As I argued, the theory of one account borrowing from another is too simplistic to explain this remarkable congruence of the accounts. So why do we see these convergences? Here’s an explanation to consider.

The Tower of Babel – After the Flood

Following the account of Noah, the book of Genesis in the Bible goes on to record the descendants of his three sons and to state that “From these the nations spread out over the earth after the flood.” (Genesis 10:32). But how did this ‘spreading out’ occur?

The Genesis account lists in detail the descendants of these three sons of Noah as you can read here. The account then goes on to describe how these descendants disobeyed God’s directive, who had commanded them to ‘fill the earth’ (Genesis 9:1), but instead these people remained together in Mesopotomia to build a tower (read the table of nations here). The account states this was a tower ‘that reaches to the heavens’ (Genesis 11:4). This means that these first descendants of Noah were building a tower for the purpose of worshiping bodies in the heavens (sun, moon, planets etc.) instead of worshiping the Creator.

It is well-known that star worship originated in Mesopotamia (where these descendants were living) and that it then spread all over the world. A Religion Dictionary reference states that star worship:

This was certainly so in Mesopotamia in the last two millennia bce [10: i–iii ] and in Central America among the Maya [9: v ]. Star-worship probably underlies the prehistoric megalithic astronomical sites of northern Europe [9: ii–iii ; e.g. Stonehenge] and similar sites in North America [9: iv ; e.g. the Big Horn medicine wheel]. From Mesopotamia star-worship passed into Graeco-Roman culture…

So instead of worshiping the Creator, Noah’s descendants worshiped planets and stars. The account then says that to frustrate this, so that the corruption of worship would not become irreversible, God decided to

…confuse their language so they will not understand each other. (Genesis 11:7)

As a result of this, these first descendants of Noah could not talk with and understand each other and thus in this way the Creator

…scattered them from there over all the earth (Genesis 11:8)

In other words, once these people could no longer understand each other, they migrated away from each other, within their newly formed linguistic groups, and thus they ‘scattered’. This explains why the different people groups of the world today speak in very different languages, as each group spread out from their original center in Mesopotamia (over many generations) to the places where they are found today. Thus, their respective histories diverged from this point onwards. But each language group (which formed these first nations) had a common history up to this point. This common history included the  flood event (of Noah), and thus the convergence of the flood accounts is therefore due to the different peoples remembering that event in their respective histories.

The Testimony of the ‘week’ in the Hindi Calendar

It was when I worked and traveled in India that I noticed a testimony to this explanation which I found to be rather remarkable – but is easy to miss. It does not record a dramatic event (like the flood) but it is a rather mundane detail, therefore not readily noticed, but it is peculiar enough to demand an explanation. When working in India I saw the many Hindi calendars. I noticed that they were different than western calendars. 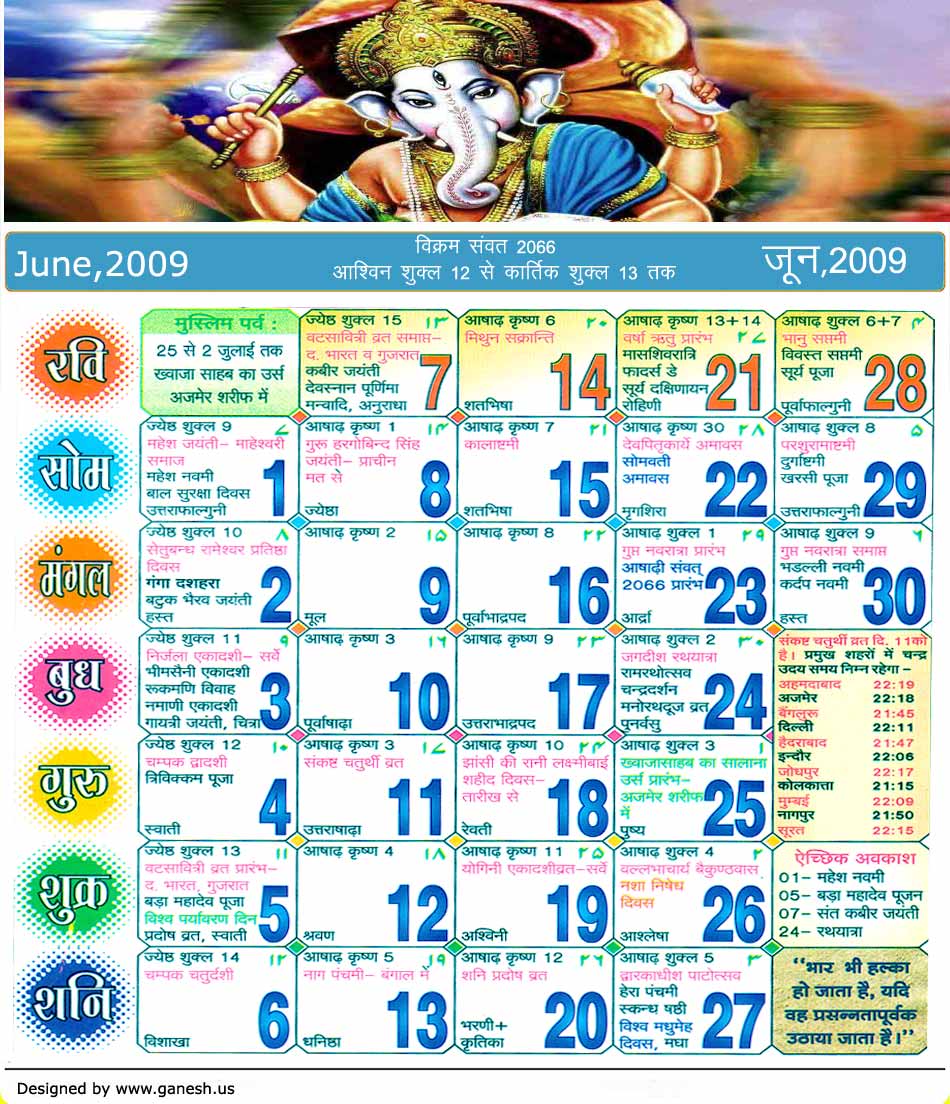 Hindi Calendar – the days of the month go top to bottom, but there is the 7-day week

The obvious difference to me was that the calendars were constructed so that the days would go down columns (top to bottom) instead of across rows (left to right), which is the universal way of demarking calendars in the West. Some calendars had different numbers than the western ‘1, 2, 3…’ since they used the Hindi script (१, २, ३ …). I could understand, and even expect, such difference since there is no ‘right’ way to structure a calendar. But it was the central convergence – in the midst of these differences – that struck me. The Hindi calendar used the 7-day week – the same as in the Western world. Why? I could understand why the calendar was divided into years and months like the Western one since these are based on the revolutions of the earth around the sun and the moon around the earth – thus giving astronomical foundations universal to all people. But there is no astronomical time basis for the ‘week’. When I asked people they said it was custom and tradition that went far back in their history (how far back no one seemed to know).

… and the Buddhist Thai Calendar has a ‘week’

I also had the opportunity to live and work in Thailand. While there I would view their calendars.

Thai Calendar goes left to right, but has a different year than in West – but still that 7-day week

Being a Buddhist country, Thais mark their years from the life of the Buddha so that their years were always 543 years greater than in the West (ie the year 2013 AD is 2556 in BE –Buddhist Era – in the Thai calendar). But again they also used a 7-day week. Where did they get that from? Why are calendars that diverge in so many ways across different culture and language groups based on the 7-day week when there is no real astronomical basis for this calendar time unit?

Testimony of ancient Greeks on the ‘week’

These observations on Hindi and Thai calendars pushed me to see if the 7-day week was evident in other ancient cultures. And it is.

The ancient Greek physician Hippocrates, who lived around 400 BC is considered the father of modern medicine and he wrote books, preserved to this day, recording his medical observations. In doing so he used ‘week’ as a time unit. Writing about the growing symptoms of a certain disease he stated:

Aristotle, writing in the 350’s BC uses the ‘week’ regularly to demark time. To cite one example he writes:

The majority of deaths in infancy occur before the child is a week old, hence it is customary to name the child at that age, from a belief that it has now a better chance of survival. (Aristotle, The History of Animals, Part 12, ca 350 BC)

So where did these ancient Greek writers, far removed from India and Thailand, get the idea of a ‘week’ such that they used it so unassumingly, quietly but obviously expecting their Greek readers to know what a ‘week’ was? Remember, Hippocrates and Aristotle lived long before the Old Testament was translated into the Greek Septuagint (ca 250 BC) so they – and their readers – did not borrow it from Genesis. Perhaps there was an historical event which all these cultures had in their past (though they may have forgotten the event) which established the 7-day week?

The Genesis account does describe just such an event – the initial creation of the world. On that basis the first humans used, and then passed on to succeeding generations this 7-day cycle in the calendar. When mankind was subsequently scattered by the confusion of languages these major events that preceded this ‘scattering’ were remembered in different ways by some of these different language groups, including the Vedic promise of a coming sacrifice, the accounts of the cataclysmic flood, the primeval events of Genesis embedded in the Chinese calligraphy – and now the more innocuous 7-day week. The widespread and ancient 7-day week, at the very least, argues for the fact that this 7-day cycle gained prominence early in human history, long before the Biblical account started exerting its influence outside the Jewish nation.

Even our names for the seven days of the week (Sunday, Monday, etc.) are not Biblically derived. Each name for the days of the week reference the seven heavenly bodies visible to the naked eye (Sun, Moon, Mercury, Venus, Mars, Jupiter, and Saturn) which the different cultures, from the Greeks, to the Romans and the ancient peoples of the East worshiped. The current names of the days of the week are living artefacts of the corruption surrounding the events of the tower of Babel which preceded mankind’s dispersal, when the descendants of Noah wanted to build a tower that ‘reaches to the heavens’.  But the 7-day cycle itself was preserved through this corruption to point even further back – to Noah, and beyond.

This explanation certainly is the cleanest and simplest way to explain these convergences.  The different calendars in use today but having the ‘week’ in common are testaments to Noah and his early descendants.  The Genesis account also provides the cleanest explanation for why the human race is partitioned by many languages.  Most of us today dismiss this part of the Biblical account as mere superstitious mythology but these weekly calendars and diverse tongues in use by billions today are witnesses that should perhaps provide food for thoughtful rethinking.