The Prophet, The Skeptic, & the Fulfilled Event (Pt. 2)

The ‘Fed’ Weighs in on Trusting Event Predictions

In my last post I put forward how the Jewish exile from Israel 606 BC -> 537 BC -> 1948 AD was foreseen by Ezekiel as he prophetically lay on his side for 430 days.  I used this to address Sam Harris’s demand that the Biblical prophets foretell something specific for our time.

The Prophetic Timetable for Jerusalem

What is interesting is that this same sequence also holds true for the city of Jerusalem and the Jewish temple – it is just frame-shifted from the above dates.  To see this we just need to know some details of Jewish history.  The Jewish nation of Judah lost its independence to the Babylonians in 606/605 BC when the first wave of deportations to Babylon occurred and which started the initial 70 year countdown.  From this point on they were a vassal state of Babylonia.  However it was not until their failed revolt a few years later that the Babylonian king Nebuchadnezzar came and besieged Jerusalem and then took it, destroying and burning both the city and the Jewish Temple.  This occurred either in either 587 or 586 BC (different scholars argue either of these years).  This started the exile and desolation of Jerusalem proper.

The Jews returned under the Persian Emperor Cyrus’s Edict in 537 BC that fulfilled the 70 years of exile that Jeremiah had predicted.  But when the Jews returned they were not able (because of lack of interest and local opposition) to rebuild their temple.  That endeavor was not begun in earnest until 520 BC, the temple being finally inaugurated in 516 BC.  So from 587/86 BC to 516 BC the temple was also desolate for 70 years.  The length of time was the same as the exile but just shifted over.

I suggested that the re-birth of Israel in 1948 was what Ezekiel foresaw as the culmination of that first deportation in 606/605 BC and return in 537 BC with the remainder of the 430 years multiplied by seven as per the principle of Leviticus – exactly as Sam Harris had asked for.  But in that 1948 re-birth Israel did not get Jerusalem.  In the fierce war of 1948 they were not able to hold the city or the Temple site, though they were able to establish their nation outside of Jerusalem.  It was only in a subsequent war, the six-day war of 1967, that Jerusalem and the Temple site was captured by Israel.

Applying the same prophetic timetable that we used for the nation of Israel onto Jerusalem we get the following result: 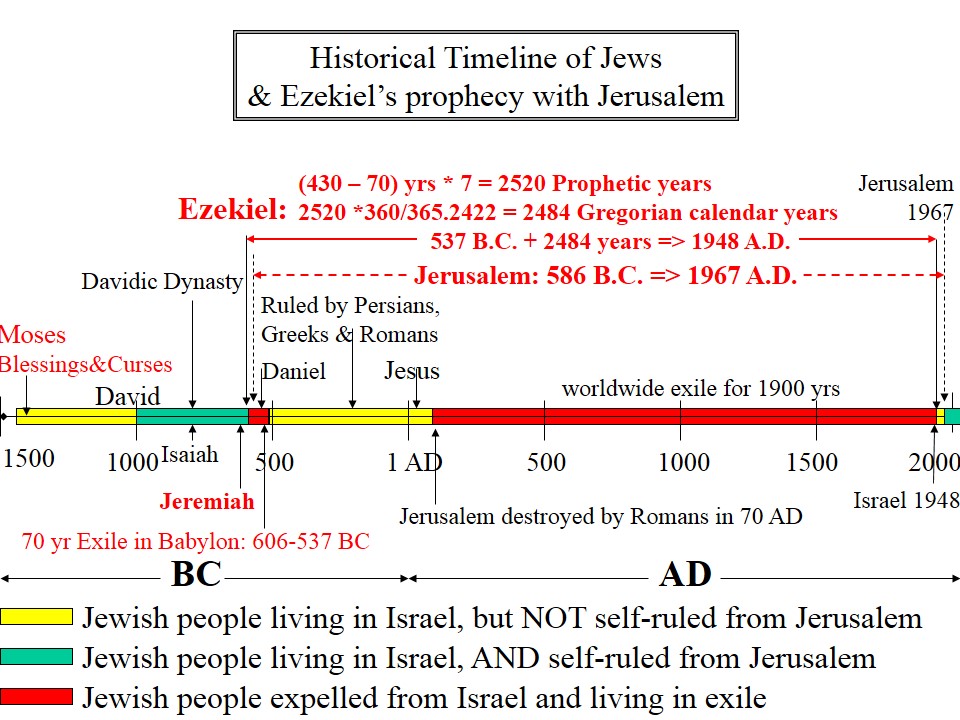 Ezekiel foretells the dispersal and re-gathering to Jerusalem, as a frame-shift of the schedule of Israel proper

In other words, the prophetic schedule given by Ezekiel (with some principles from Leviticus) is frame-shifted so that the city of Jerusalem also fits the prophetic timetable of exile for the nation proper.  The pivotal dates of 586 BC (destruction of Jerusalem) -> 516 BC (restoration of temple) -> 1967 AD (return of Jerusalem to Israel) matches the predictions of Ezekiel exactly as the pivotal dates of 606/05 BC (first deportation of Israelites) -> 537 BC (first return from exile) -> 1948 AD (re-birth of modern nation).  Both sets of events follow the same intervals and thus both are fulfilled with Ezekiel’s drama of lying on his side.  As the saying goes, Ezekiel “killed two birds with one stone”.

So what are we to make of this?  Cautious skepticism is certainly warranted – and here is why.  The reality is that if you look long and hard enough you can match some sequence of numbers with different historical events.  For example, the interval of 2300 days (and thus the number 2300) features prominently in Daniel 8.  World War II was awfully close to being 2300 days long.  Could it then be said that this event is a ‘fulfillment’ of Daniel’s 2300 days because of the close match?  We would probably all see this as a coincidence especially since Daniel 8 is talking about something else.  If so, what makes Ezekiel’s foretelling different?

The Persistent Theme of Dispersal and Re-gathering

This World War II and 2300 day example illustrates how Ezekiel’s ‘lying on his sides’ prophecies are quite different since they not being matched with any event that ‘fits’ but are fitted with what he is predicting as he lies on his side and this prediction is part of a specific theme that runs through the Bible – this theme of a dispersion and a re-gathering of the Jews.  It starts with the books of Moses and continues through many books of the Old Testament in addition to Ezekiel and goes even into the New Testament when Jesus himself predicted the destruction of Jerusalem and its restoration.  Sam Harris thought the prediction too vague because he did not follow this theme as it was developed in subsequent books.

The theme established with Moses ensures that we are not just grabbing any set of numbers presented in Ezekiel and looking for any set of events that matches these numbers.  Moses and Ezekiel (along with Amos, Isaiah, Jeremiah and a few others) work in tandem to flesh out a consistent theme with some remarkably precise elements within that theme.  In some future articles I hope to look at some other aspects of this theme presented in these other books.  All have a degree of specificity that is startling and matches what we see today.  Ezekiel matches with respect to a precise and measurable chronology.  The others match with other criteria.  I know of no other writings, modern or ancient, that does this in a remotely comparable way.

Foretelling: Biblical Prophets vs. the Fed

We can in fact compare the prophetic team of Moses, Ezekiel et al. with that of the very brightest and best that work for us today.  Last week Ben Bernanke stepped down as the chairman of the US central bank – the US Federal Reserve or the ‘Fed’.  His predecessor, chair of the Fed from 1987-2006, was Alan Greenspan, probably the most well-known and respected economist in the world.  He became famous for having a midas touch in guiding the US (and global) economy through persistent growth during his tenure.  Greenspan was chair of the Fed until just before the great economic crash in 2008.  He published his memoirs late last fall and thus gave a series of high-profile interviews in the global media.  In his words, here is how well the crash of 2008 was anticipated by the best and brightest that lead our planet in economic forecasting.

“One thing that shocked me is that not only did the Federal Reserve’s very sophisticated model completely miss (the crash on) September 15th, 2008, but so did the IMF, so did JP Morgan, which was forecasting American economic growth three days before the crisis hit, going up all through 2009 and 2010.”  BBC interview on Oct 20, 2013 (http://www.bbc.co.uk/news/business-24602273)

All the Kings Horses and All the King’s Men did not foresee the fall of the economic Humpty Dumpty even three days before it happened!  They had access to all the computer models running on super computers with the best and latest economic research and data but not one of the agencies setup for the very purpose of guiding economies around the world saw the 2008 economic crash even just days before it hit!  This gives us a benchmark to make a comparison:  the very best of human predictive capability vs. the Biblical prophets.  When I do that I am astounded that this theme of dispersal and re-gathering that was declared thousands of years ago has come to pass, is continuing before our eyes, and with a level of detail and precision that the best human forecasters can only dream about.  Events certainly could have played out differently.  By sheer probability the Jews should have ceased being a distinct ethnic group along with the “Jebusites, Hittites, Amorites, Perizzites, Hivites, Girgashites” that are specifically mentioned in the books of Moses as being the peoples surrounding the Israelites in his day – and who have long ago disappeared as distinct groups.  But Moses predicted the Israelites would persist though they would be scattered and then re-gathered.  Ezekiel then added the timing to this theme.  To use the words of Harris, against those odds an accurate set of predictions spanning millennia is like a ‘product of omniscience’.

But perhaps even more surprising is that you and I are still trusting the economic predictions of the Fed, the IMF, JP Morgan etc.  If you have a pension plan, RRSPs or equivalent, or your company is investing in new production or technologies you are trusting in these same people and agencies that could not foresee the worst economic crash since the 1930’s.  But I am not arguing that we should cease to trust them.  In fact I have RRSPs and fund managers that invest based on the economic predictions of these agencies.  I do so not because I do not have trepidation and doubt, not because all my questions are answered, nor because I understand all their models.  I do so because on the balance they offer reasonable hope.  And even more so because there are no real alternatives.

If you and I will practically-speaking place our trust in these institutions that have so obviously failed at critical moments it is ironic that we struggle so in placing our trust in the gospel.  Yet this is what the gospel calls us to.  The call of the gospel is not to understand every point, not to have no further questions or uncertainties, nor even to dispel all our doubts.  The call of the gospel is to trust our lives with the person and work of Jesus – nothing more, nothing less and nothing else.  He is made known to us through historical writings that have been reliably preserved.  Hundreds of years before his life he was preceded by men who claimed Divine Inspiration in their writings and then predicted details of his life in uncanny ways.  These same men also predicted events such as the dispersion and re-gathering of the Jews which we have been looking at, so their predictions are testable.  A strong case can be made for the bodily resurrection of this Jesus.  In fact, when we look at other alternatives out there to place our trust in, this assessment given by his disciple Peter is fairly bang-on still these two thousand years later.  When he was asked if he was going to quit trusting Jesus he replied

Simon Peter answered him, “Lord, to whom shall we go? You have the words of eternal life.” (John 6:68)

All of us extend trust.  The question is to whom and to what. We trust our money to those, as we saw, who have failed us.  Given the track record of the gospel and the dearth of alternatives that offer hope in the face of our approaching death, give meaning and purpose in a seemingly purposeless world, and a relationship with our Creator that is promised to continue into eternity, one is no fool for deciding to trust Jesus and, perhaps with some fear and trepidation and not having all the answers to ones questions, accept his gospel offer of life.  Maybe we should look again at that sought after ‘note’ printed by the Fed and take its advice to heart about where to place our trust.