As the World Cup in Brazil continues in the Sudden Death of the Quarter Finals the drama  intensifies.  Early favorites Spain and Italy crashed in the group stage while Uruguay’s Suarez bizarre gnawing of an Italian opponent fueled ‘biting’ commentary in the football gossip column.  In the Round of 16, high-profile diving (Netherland’s Robben against Mexico) as well as nail-biting penalty kick deciders (Coast Rica’s dramatic win over Greece) has vaulted both intrigue and suspense into the games.  With every game closely matched the favorites have gone to the edge of sudden death elimination as scrappy underdog teams have fought them every minute of play.  The BBC states that a wide variety of statistics show that this is the best World Cup tournament ever.

For pundits and social media discussions a question remains:  Who is the best player?  Prior to the tournament Messi was an early favorite.  Though he has played very well, Neymar has also excelled.  Columbia’s 22 year old Rodriguez’s tournament leading 5 goal performance and brilliant touch has vaulted his name into the ranks of the contenders.  We await the coming super-star showdowns as the Sudden Death knock-outs continue.

With such world-wide attention riveted on the World Cup and the drama surrounding the teams, games and players it might lead one to wonder whether our devotion will make a lasting mark on us and the world, melting our problems away. 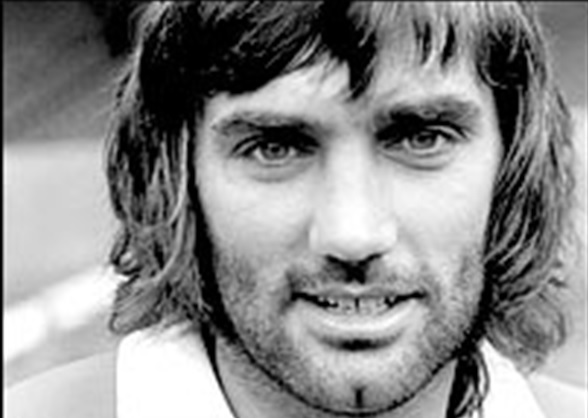 George Best – the best footballer of his generation

But then I am reminded of another football player – also a household name – but in a previous era.  Then, like now, this player’s actions both on and off the pitch engendered much discussion and speculation.  He was, in the spirit of our reality TV and celebrity gossip world an ‘idol’.  Regarded as the best player in the world, the irony was that this was also his name – George Best.  He was one of those rare individuals who actually lived out his name. 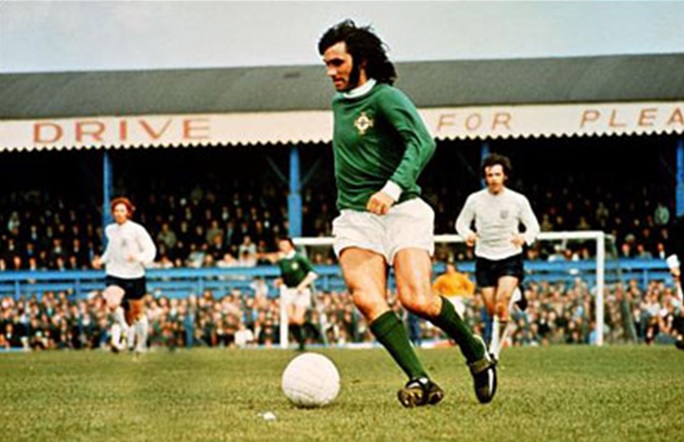 Best – on the pitch

In spite of arguably being the best football player in the world, George Best had a problem.  This problem is also one that you and I face.  As you can guess, his problem was not lack of football trophies, though heralding from a non-powerhouse football country of Northern Ireland, a World Cup performance eluded him. 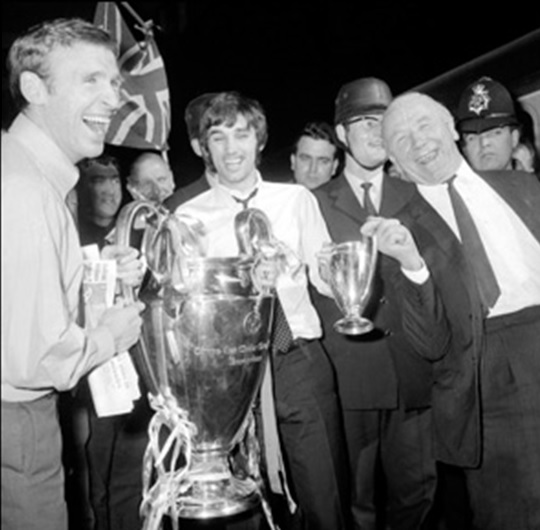 Much of what we hope will give us the ‘good life’ Best got: talent, fame, money, friends and lovers.  He was the talk of the day, admired, loved and followed by so many. 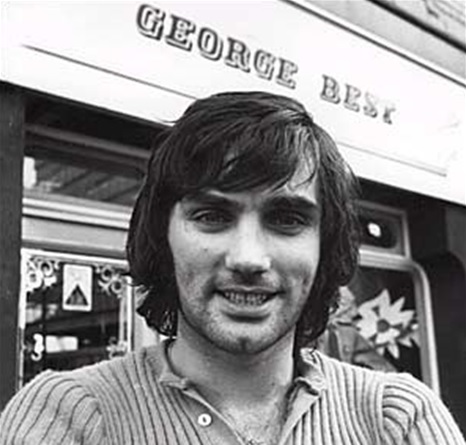 But Best still had this problem that would not go away.  It is one so widespread and common, and so unavoidable that he probably kept himself from thinking about it too much – just as you & I are also tempted to.  Like Best, we may figure that the problem is too intractable and unsolvable that we are better off not thinking about it – perhaps by remaining singularly focused on the revolving sports and entertainment headlines of today. 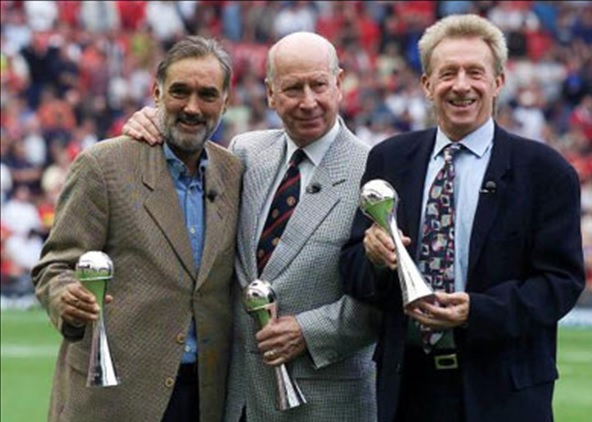 George Best on the left; Older.

George’s problem was that he got sick … got old … and eventually … he died.  True, he accelerated his demise by drinking to excess, but even had he been the picture of sobriety all his life he would only have delayed the inevitable – just as we can (perhaps) only delay the same inevitable fate that awaits us by healthy diet and proper exercise.

It is the utter finality and inescapability of death that pushes us to almost  denial.  Though it is not Sudden Death as in the knock out stage of the World Cup, it is Certain Death that is continually creeping up on us.  We do all we can not to think about it – since after all what can we do about it?  So for many of us our motto becomes “I’m not here for a long time, I am here for a good time”.  We fill our waking hours with work and with good fun – like mesmerizing ourselves with the latest in the non-stop sports and entertainment machine. 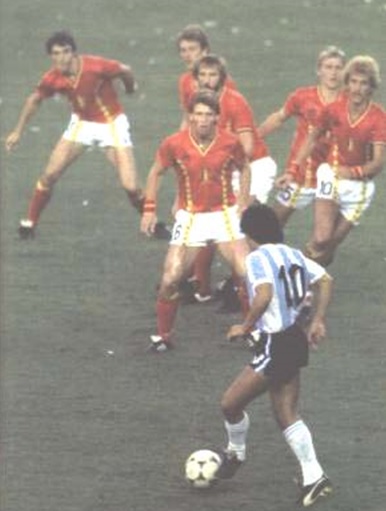 But with the perspective of seeing formerly invincible World Cup champions succumbing to the advances of Death I know that this generation of ‘idols’, in spite of their breath-taking prowess today, also are held in the steely grip of this unseen enemy, stronger by far than any opponent they face on the pitch.

Now if there was no possible solution out there then I would probably concur that it is better just to ‘live for today’ and not think about it.  After all, there is nothing out there that can avoid this approaching sting of Death.

Or is there?  This actually is the central facet of the gospel, the very reason that ‘gospel’ means ‘good news’.  The gospel is not about religious observances, whether worthwhile or 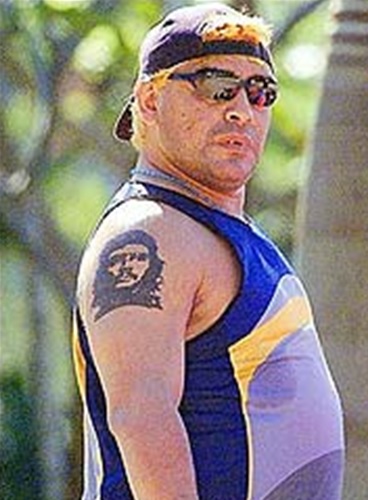 not; it is not about what we should do; nor is it about some ethereal heaven.  The gospel is that Jesus conquered death, erasing its sting, when he rose alive from the dead, not as a ghost, not like some zombie, nor as a spiritual metaphor – but historically, in the reality of this world, and in the flesh.  And he will give this same resurrection as a gift to any who would take it.

Now some do doubt whether this indeed did happen.  Fair enough, but consider this.  Many of the matches in this World Cup have ended with a dramatic goal in the last minute – even in extra time.  In the last seconds of play, the pessimists (fancying themselves as realists) on the sidelines could rightly say “The chance of scoring is very low”.  But the players in the game and their fans know that until the whistle actually blows there is still hope to seal the game.  In this hope they continue to give everything they have, trying every avenue that opens up to get that last precious goal.  They have nothing to lose and everything to gain by chasing every loose ball and running down every open lane.  All of us expect this from them.

So what about even an offhand possibility that Jesus could have risen as the gospel states?  The stakes are so game-changing that it is surely worth the effort to check it out.  And it can be scrutinized with an investigative, open-minded outlook; it need not be, as some suppose, believed with a religiously narrow-minded don’t-look-at-the-facts attitude.  For starters the textual reliability (ie whether the Biblical documents have been changed or messed with) of the New Testament accounts can be reasonably evaluated and the message of the gospel understood in summary.  Then the events of the alleged resurrection can be weighed with what we know happened in history.   And the Old Testament (written hundreds of years before Jesus ever walked the earth) can be evaluated to see if they really are prophetic utterances, woven together with a consistent theme predicting well in advance whether this indeed was a Divine plan.  There are many openings available to us to seek a lane that is suitable for our position.

I am planning to enjoy the rest of the World Cup, to be captivated with the drama of sudden death knock-outs, the finesse, as well as the prowess displayed by today’s top players of the ‘beautiful game’.  I hope that this would be a memorable tournament for you as well.  We will soon see who the best player in the world is today.  But perhaps with the perspective of knowing that this crop of contenders have only replaced yesterday’s older ‘Greats’, and in Qatar 2018 many of them will be supplanted by the next generation – and that (in the words of Pink Floyd)

This is why Jesus came and this is why the gospel deserves to be considered.  I hope that you do.