From Soapberry Bugs to SuperBugs: Nature’s slippery slide down.

In the second video of Session 1 I documented immense confusion in attempts to try to identify a natural process which can be observed to increase the information and/or functional content in biological organisms.  And given the confident (but mistaken) claims of its detection and operation it is obvious that naturalists (in the sense of those who believe natural processes can explain life through an evolutionary process) expect it to be observable, i.e. the implicit prediction is that this process should be detected.  I surveyed the stickleback fish case study – written about in many university textbooks and popular books on evolution – and showed from what they themselves say this was simply a loss process – a slide down, not a gain up.  Then we saw that though birds can lose wings, and mutations can cause Apert’s Syndrome, these are not examples of gain-of-function processes – even though they are touted as such in the textbooks.  Natural selection, though observed, is also not a gain-of-function process.  They all decrease the information – that is – these processes of nature slide genomes downwards, not push them upwards to more functionality.

In our previous post we saw the cell function at the microscopic level, a point-of-view that convinced long-time atheist Antony Flew to change his mind for Intelligent Design.  But what rebuttals are given in university texts?  Let’s take a look at a prominent one: The Evolution of the Soapberry Bug.

The Soapberry Bug: A Case Study in Evolution

It took me some time (and a lot of reading) to arrive at this conclusion.  And if this is a new thought for you I am sure that likewise this will require more consideration.  But I am not just maliciously picking on some ‘mistaken’ examples in a sea of correct ones.  The examples I covered in the video are endemic across the literature.  But how can this be?  Analyzing another case study, taken from Evolutionary Analysis by Scott Freeman and JC Herron, can help us better understand how it occurs. 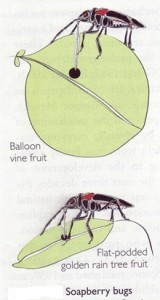 Soapberry bugs: Before & After the New Host Plant

In this study, soapberry bugs in Florida had traditionally fed on the Balloon vine fruit as shown in this figure taken from the text.

But in 1926 a new host plant for this bug was introduced and almost immediately biologists noticed a change in the beak length.  Our text concludes that:

So again, an example of observed evolution is claimed.  A graph of beak lengths over time is presented from the text to support this conclusion.  I added the green vertical 1926 line which is the point at which beak lengths changed.  So what can we conclude? 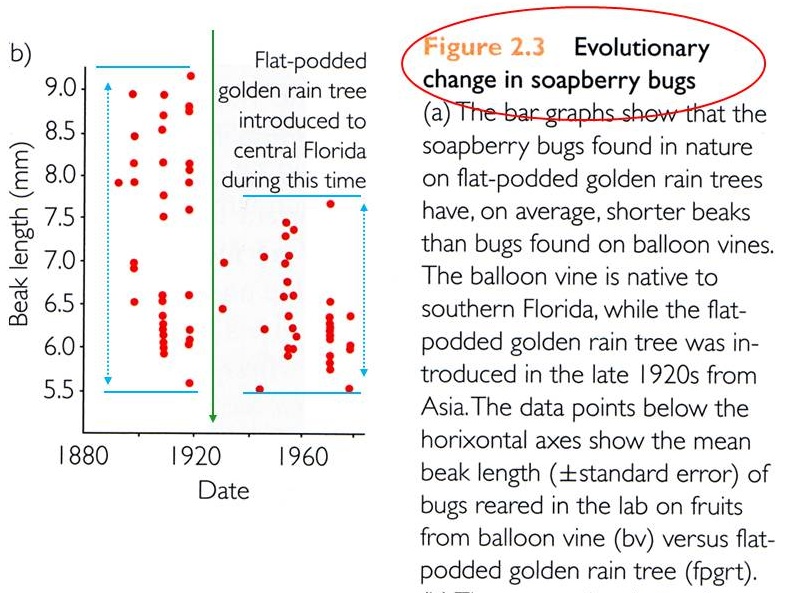 As you can see, before 1926 soapberry beak lengths ranged from 9 to 5.5 millimeters – a 3.5 mm range.  After 1926, when this new tree was introduced the beak size range was reduced from 7.5 to 5.5 millmeters – a 2 mm range.  The title for the graph (which I circled) states this as ‘evolutionary change in soapberry bugs’.  But was anything new gained or developed?  Were even new beak lengths, not previously seen, observed?  No! Not at all!  All that happened was that after the new tree was introduced, beak sizes from 7.5 to 9 millimeters disappeared.  Information was lost!  A certain allele that produced long beaks was selected against in the new environment and was now gone.  Change –Yes!  Natural Selection – Yes!  Evolution – definitely not!  Their own data refutes it!

Evolution: Not just any Kind of Change

But how can this case study, which simply documents a loss (of longer beak lengths), be touted as an example of evolution?  It is simple.  The authors have equated ‘evolution’ with ‘change’.  But that is erroneous at best and misleading at worst.  Evolutionary naturalism as the establishment’s answer to Design is a claim to account for the origin and development of all life, and is supposed to be a process that over long time produces new information, genes and structures that were not previously there.  That is not just any kind of change, but a certain kind of change – one that increases genetic information and function.  To reason like these authors is like saying that increasing company profits is simply a change in the balance sheet, and thus if one can show any balance sheet change – such as a corporate loss  – this would demonstrate increased profits since a change has occurred in the balance sheet??!!   This is such a basic logical error – called the fallacy of equivocation – whereby the definition of a key term is subtly modified during the reasoning process (in this case ‘evolution’ is modified from ‘change with new function and information’ to ‘any change’) that I found it breathtaking to see it not just once, but again and again in so many university textbooks and books promoting naturalism and evolution.

Bacterial Resistance to Antibiotics: A Case of Evolution?

And this is also true of the cases of Superbugs, perhaps the strongest cases in the public mind of observed evolution.  We have all heard of bacteria that have become resistant to antibiotics, having thus ‘evolved’, and now threatening humans with an epidemic.  What is happening in these situations?  Are new enzymes, processes, or organelles that were not previously there being developed by these bacteria?  That is what I had originally thought.  If so that would be an example of an innovative evolutionary process.

But if we examine the literature we find this is not the case.  Consider the following:

‘most cases’ antibiotic resistance results from selection of an existing genetic trait, especially those traits that are highly variable, such as the natural defences that all organisms possess[1]

In other words in most cases, there were bacteria prior to the introduction of the antibiotic that already had the resistance.  The other bacteria were selected away by the antibiotic and we are left with the resistant bacteria.  For example, there was a 1988 University of Alberta study of bacteria on the bodies of Arctic explorers frozen in 1845.  Investigators discovered that some of the bacterial strains were resistant to antibiotics. The study, which evaluated six strains of Clostridium on three men who had been buried in permafrost, found the bacteria were particularly resistance to antibiotics that were developed over a century after the men died.[2]

What about Bacteria developing drug Resistance?

As we see here, conjugation, and processes that create resistance in bacteria – making them ‘superbugs’ is not an ‘evolutionary’ case of gaining new information or creating new functions.

The mutations causing resistance to mycin is a case similar to birds on remote islands losing wings – it may be an advantage since there are no predators on those islands – but it is not an example of gain-of-function.  In the specific antibiotic environment, having a misshapen ribosome prevents the antibiotic from readily attaching and there is thus resistance.  But the ribosome does not function as well as non-mutant ribosomes and thus these bacteria are selected out (eliminated) in the wild.

French biologist Pierre Grasse remarked on the irony of using bacteria as a showcase to try to observe evolution.  He stated:

Bacteria, the study of which has formed a great part of the foundation of genetics and molecular biology, are the organisms which, because of their huge numbers, produce the most mutants . . . bacteria, despite their great production of intra-specific varieties, exhibit a great fidelity to their species. The bacillus Echerichia coli, whose mutants have been studied very carefully, is the best example. The reader will agree that it is surprising, to say the least, to want to prove evolution and to discover its mechanisms and then to choose as a material for this study a being which practically stabilized a billion years ago.[4]

Resistance to Insecticide: No Evolution

Insect resistance to a pesticide was first reported in 1947 for the housefly (Musca domestica) with respect to DDT. Since then the resistance to pesticides has been reported in at least 225 species of insects and other arthropods. The genetic variants required for resistance to the most diverse kinds of pesticides were apparently present in every one of the populations exposed to these man-made compounds.[5]

The fruit fly is another small insect from which investigators have tried to ‘observe’ evolution. Rifkin writes about this

The fruit fly has long been the favorite object of mutation experiments because of its fast gestation period (twelve days). X-rays have been used to increase the mutation rate in the fruit fly 15,000 percent. All in all, scientists have been able to “catalyze the fruit fly evolutionary process such that what has been seen to occur in Drosophila (fruit fly) is the equivalent of many millions of years of normal mutations and evolution.” Even with this tremendous speed-up of mutations, scientists have never been able to come up with anything other than another fruit fly.[6]

The ability to observe this alleged process has eluded scientists since Darwin so eloquently argued for it.  However, instead of coming clean about this, textbooks and news articles confuse us in a slippery way by equivocating evolution with ‘change’.  And this is always presented as a scientific (ie observed) answer to Design.  But Soapberry bugs to SuperBugs simply attest, along with all other observed changes, that Nature is simply on a slide downwards.  To-date there is no observed alternative to Design.

6 thoughts on “From Soapberry Bugs to SuperBugs: Nature’s slippery slide down.”