Easter Examined: Could Jesus have risen from the dead?

As a child I learned many ‘fantastic’ stories surrounding our religious holidays.  I learned that a jolly fat man lived in the North Pole and flew around the world with reindeer, climbing down chimneys to give gifts to good girls and boys on Christmas.  I learned about the Easter bunny that gave out eggs and chocolates to the same good girls and boys at Easter time.  As I grew older I realized that these stories were cute but not true – I could look back and smile on them – but I would (and did) outgrow them.

Is the Resurrection story of Jesus credible?

I also learned other ‘stories’ about our religious holidays.  These stories had shepherds seeing angels, wise men following stars, a baby born in a manger – stories that form the basis of the Christmas celebration.  But perhaps the most dramatic was the story of how Jesus died on a cross, but that three days later he came back to life again – stories forming the basis of Easter.

These second set of stories, taken at face value, seem as fantastic as the first set.  The question I had when I got a little older and realized that the first set of stories were not ‘really’ true was – Is the second set also false?  After all, these stories seem equally incredible!  This is especially true of the Easter story which claimed that three days after his death, Jesus underwent a physical resurrection and came to life again.  This is probably the most audacious story across all religions, one perhaps fit for a tabloid headline – ‘Dead Man Comes Back to Life’.  Could it be true? Or even credible?  Was there any reasonable evidence to substantiate it?

The Resurrection: A Life-and-Death Issue

These are hard questions to answer.  But surely it is worth some adult thought since it touches on our mortality.  After all, as Woody Allen reminded us in ‘The Wisdom I learned from a filthy-rich, hard-drinking playboy’ death is inevitable for you, me and all others too.  If Jesus has in some way defeated death then it would have huge implications for all of us.  So in this and the subsequent post I want to briefly summarize some things I have learned in studying and thinking through this question.  There are more detailed videos in Session 7.

Perhaps the best way to try to answer this question is to work through all the possible alternatives and see which alternative makes most sense – without prejudging by ‘faith’ any supernatural explanation.  That Jesus lived and died a public death that has altered the course of history is certain.  One need not even go to the Bible for that.  We looked at some external evidence for this in Session 4.  But here let’s review a couple of secular references to Jesus and the impact he made on the world of his day.

Tacitus’ Testimony relating to Jesus and the Resurrection

The Roman governor-historian Tacitus made a fascinating reference to Jesus when describing how Nero martyred 1st century Christians (in AD 65) as scapegoats for the burning of Rome.  Here is what he says:

‘Nero.. punished with the most exquisite tortures, the persons commonly called Christians, who were hated for their enormities. Christus, the founder of the name, was put to death by Pontius Pilate, procurator of Judea in the reign of Tiberius; but the pernicious superstition, repressed for a time broke out again, not only through Judea, where the mischief originated, but through the city of Rome also’ (Annals XV. 44)

The interesting point about this statement is that Tacitus corroborates that Jesus was: 1) a historical person; 2) executed by Pontius Pilate in Judea; 3) by 65 AD (time of Nero) the Christian faith had spread across the Mediterranean to Rome from Judea – and with such an intensity that the emperor of Rome felt he had to deal with it.  Notice as well that Cornelius Tacitus is saying these things as a hostile witness since he considers what Christ started a ‘pernicious superstition’.

Josephus was a Jewish military leader/historian who wrote to a Roman audience.  In this writing he summarizes the history of the Jewish nation from its beginning up to his time.  In so doing he covers the time and career of Jesus with these words:

‘At this time there was a wise man … Jesus. … good, and … virtuous.  And many people from among the Jews and the other nations became his disciples. Pilate condemned Him to be crucified and to die. And those who had become his disciples did not abandon his discipleship. They reported that He had appeared to them three days after his crucifixion and that He was alive’… (Antiquities xviii. 33)

So it seems from these glimpses back into the past that the death of Christ was a known and discussed event and the issue of his resurrection was being forced unto the Roman world by his disciples.

Acts on Events in Jerusalem just after Jesus’ Crucifixion

Luke, a physician and historian provides further details as to how this movement advanced in the ancient world.  Here is his excerpt from Acts:

‘The priests and the captain … came up to Peter and John … They were greatly disturbed because the apostles were teaching the people and proclaiming in Jesus the resurrection of the dead…They seized Peter and John… put them in jail…When they saw the courage of Peter and John and realized that they were unschooled, ordinary men, they were astonished… “What are we going to do with these men?” they asked’.. (Acts 4:1-16)
‘Then the high priest and all his associates,… arrested the apostles and put them in the public jail. …they were furious and wanted to put them to death….They called the apostles in and had them flogged. Then they ordered them not to speak in the name of Jesus, and let them go.’ (Acts 5:17-40)

One can see from this account that the political/religious leaders were going to great lengths to stop this ‘pernicious superstition’ (as Tacitus called it).  We should note that these events were occurring in Jerusalem – the same city where only a few weeks earlier Jesus had been publicly executed and buried.

Having surveyed the pertinent historical data we are in a position to work through the possible explanations that surround the hypothesized resurrection of Christ.  To start with, we have two (and only two) possible alternatives concerning the body of the dead Jesus. 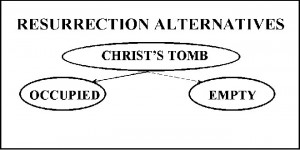 Options for the Tomb of Jesus

As the figure shows, the body of Christ was either in the tomb or was not.  Let us assume that his body was still in the tomb.  As we reflect on the unfolding events recorded in history, however, we are quickly confronted with absurdities.  Why would the religious/political leaders have to go to such extremes to stop such exaggerations of an alleged resurrection if the body was still in the tomb, a few minutes walk from where the disciples were publicly proclaiming his resurrection?  If I had been one of those religious/political leaders, I would have waited until Peter or John had reached the climax of their speech concerning the resurrection and then publicly paraded the body of Christ before all – audience and disciples.  I would have discredited the fledgling movement without having to imprison, torture and finally martyr them!  And consider – thousands were converted to belief in the physical resurrection of Christ in Jerusalem at this time.  If I had been one of those in the crowds – listening to Peter, pondering and wondering if I could believe his incredible message (after all, this belief came with a price of persecution) I would have at least taken my lunch break to go down to the tomb to take a look for myself.  If the body of Christ was still in the tomb this movement would not have gained any adherents in such a hostile environment with such incriminating counter evidence on-hand.  So Christ’s body remaining in the tomb leads to absurdities.  This alternative cannot be seriously entertained. 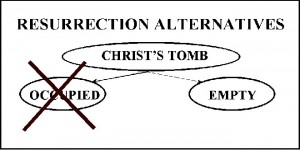 Tomb was not occupied

Of course this does not prove a resurrection.  There are several natural possibilities for how a tomb can get empty.  In my next post I look at some.

19 thoughts on “Easter Examined: Could Jesus have risen from the dead?”