What are the Ten Commandments? Why were they given?

Moses wrote the first five books of the Bible, which describe the birth of the Israelite nation thousands of years ago.  Moses’ mission was to deliver this nation to become a light to surrounding nations.  Moses began by leading the Israelites (or Jews) out of slavery in Egypt with a rescue mission known as Passover – where God liberated the Israelites in a way that pointed to a future deliverance for all mankind.  But Moses’ mission was not only to lead the Israelites out of Egyptian slavery, but also to guide them to a new way of living. So fifty days after the Passover that rescued the Israelites, Moses led them to Mt. Sinai (or Mt. Horeb) where they received the Law.

So what commands did Moses get?  Though the complete Law was quite long, Moses first received a set of specific moral commands written by God on tablets of stone, known as the Ten Commandments (or Decalogue). These Ten formed the summary of the Law – the moral prerequisites before all the others – and they are now God’s active power to persuade us to repent.

Here are the Ten Commandments as written by God on stone and then recorded by Moses in the Bible’s book of Exodus.

And God spoke all these words:

2 “I am the Lord your God, who brought you out of Egypt, out of the land of slavery.

3 “You shall have no other gods before me.

4 “You shall not make for yourself an image in the form of anything in heaven above or on the earth beneath or in the waters below. 5 You shall not bow down to them or worship them; for I, the Lord your God, am a jealous God, punishing the children for the sin of the parents to the third and fourth generation of those who hate me, 6 but showing love to a thousand generations of those who love me and keep my commandments.

7 “You shall not misuse the name of the Lord your God, for the Lord will not hold anyone guiltless who misuses his name.

8 “Remember the Sabbath day by keeping it holy. 9 Six days you shall labor and do all your work, 10 but the seventh day is a sabbath to the Lord your God. On it you shall not do any work, neither you, nor your son or daughter, nor your male or female servant, nor your animals, nor any foreigner residing in your towns. 11 For in six days the Lord made the heavens and the earth, the sea, and all that is in them, but he rested on the seventh day. Therefore the Lord blessed the Sabbath day and made it holy.

12 “Honor your father and your mother, so that you may live long in the land the Lord your God is giving you.

14 “You shall not commit adultery.

16 “You shall not give false testimony against your neighbor.

The Standard of the Ten Commandments

Today we sometimes we forget that these are commands. They are not suggestions. Nor are they recommendations.  But to what extent are we to obey these commands? The following comes just before the giving of the Ten Commandments

Then Moses went up to God, and the Lord called to him from the mountain and said, “… 5 Now if you obey me fully and keep my covenant, then out of all nations you will be my treasured possession. (Exodus19:3,5)

This was given just after the Ten Commandments

Then he took the Book of the Covenant and read it to the people. They responded, “We will do everything the Lord has said; we will obey.” (Exodus24:7)

Let’s think about this. Sometimes in my school exams, the teacher gave us multiple questions (for example 20) but then required only some of the questions to be answered. We could, for example, choose any 15 questions out of the 20 to answer. Each student would pick the 15 easiest questions for him/her to answer. In this way the teacher made the exam easier.

Many people treat the Ten Commandments in the same way. They think that God, after giving the Ten Commandments, meant, “Attempt any six of your choice from these Ten”.  We think this way because we instinctively imagine God balancing our ‘good deeds’ against our ‘bad deeds’.  If our Good Merits outweigh or cancel our Bad Imperfections then we hope that this is sufficient to earn God’s favor or get a pass to heaven.  For this same reason many of us try to earn religious merit by religious activities like going to church, mosque or temple, praying, fasting and giving money to the poor.  These acts hopefully balance out the times we disobey one of the Ten Commandments.

“… then comes the four famous ‘shalt nots’ which flatly prohibit killing, adultery, theft, and false witness.  Finally there is a ban on covetousness, forbidding the desire for ‘thy neighbours’… chattel.  …  Instead of the condemnation of evil actions, there is an oddly phrased condemnation of impure thoughts….  It demands the impossible….  One may be forcibly restrained from wicked actions…, but to forbid people from contemplating them is too much…. If god really wanted people to be free of such thoughts, he should have taken more care to invent a different species”  Christopher Hitchens.  2007.  God is not great: How religion spoils everything.  P.99-100

Why did God give the Ten Commandments?

Let’s illustrate with an example.  Suppose you had a hard fall onto the ground and your arm hurts badly – yet you are not sure of the internal damage.  Is the bone in your arm broken or not?  You are unsure if it will just get better, or if you need a cast on your arm.  So you take an X-ray of your arm and the X-ray image reveals that, yes indeed, the bone in your arm is broken.  Does the X-ray heal your arm?  Is your arm better because of the X-ray?  No, your arm is still broken, but now you know that it is broken, and that you need to put a cast on it to heal.  The X-ray did not solve the problem, but rather it exposed the problem so you would get proper treatment.

In the same way the Ten Commandments were given so that a problem deep within us could be revealed – our sin.  Sin literally means ‘missing’ the target that God expects from us in how we treat others, ourselves and God.  The Bible says that

The Lord looks down from heaven
on all mankind
to see if there are any who understand,
any who seek God.
All have turned away, all have become corrupt;
there is no one who does good,
not even one. (Psalm 14:2-3)

We all have this inner corrupting problem of sin.  This is serious enough that God says of our ‘good deeds’ (which we hope will cancel out our sins) that

All of us have become like one who is unclean,
and all our righteous acts are like filthy rags;
we all shrivel up like a leaf,
and like the wind our sins sweep us away. (Isaiah 64:6)

Our righteous merit in religious observances or helping others are only ‘filthy rags’ when weighed against our sins.

But instead of recognizing our problem we tend either to compare ourselves with others (measuring ourselves against the wrong standard), strive harder to obtain religious merit, or give up and just live for pleasure.  Therefore God instituted the Ten Commandments so that:

Therefore no one will be declared righteous in God’s sight by the works of the law; rather, through the law we become conscious of our sin. (Romans 3:20)

If we examine our lives against the standard of the Ten Commandments it is like looking at an X-ray that shows the internal problem.  The Ten Commandments do not ‘fix’ our problem, but reveals the problem clearly so we will accept the remedy that God has provided.  Instead of continuing in self-deception, the Law allows us to see ourselves accurately.

God’s Gift given in repentance

The remedy that God has provided is the gift of forgiveness of sins through the death and resurrection of Jesus Christ.  This Gift of life is simply given to us if we trust or have faith in His work.

As Abraham was justified before God we too can be given righteousness.  But it does require that we repent.  Repentance is often misunderstood, but repent simply means to ‘change our minds’ involving a turning away from sin and a turning towards God and the Gift He offers.  As the Bible explains:

Repent, then, and turn to God, so that your sins may be wiped out, that times of refreshing may come from the Lord, (Acts 3:19)

The promise for you and me is that if we repent, turning to God, that our sins will not be counted against us and we will receive Life.

The Ten Commandments in the Calendar

Along with that first Passover and Abraham’s test which stamp God’s signature on this Plan so we can be assured it is really His, the specific day when the Ten Commandments were given to Moses also point to the coming of the Spirit of God.  The Jewish Feast of Weeks, or Shavuot, is timed to the giving of Ten Commandments,  which also coincides with the exact day of Acts 2 Pentecost when the Holy Spirit came. 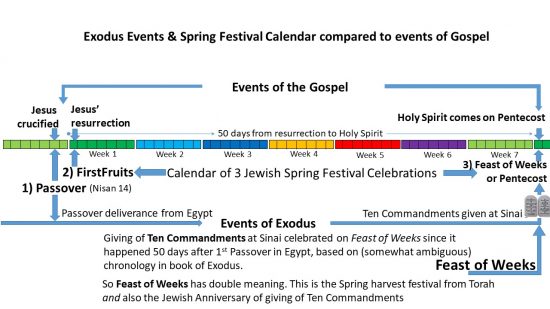 That the day when the Spirit came to indwell repentant people comes on the same day commemorating the giving of the Ten Commandments is God’s answer to Christopher Hitchens’ complaint.  God is taking ‘care to invent a different species’ – one indwelt by His Spirit, so that we will have the ability to live differently.  The precision in their timing is, once again, His Signature written on the canvas of time so we can be assured that both the Law and the Spirit are really from God.

5 thoughts on “What are the Ten Commandments? Why were they given?”