The Feast of Tabernacles: layered like an onion … with meaning

… (and pointing to a future climax?)

Every autumn a somewhat obscure 8-day festival, with a 3500 year history, is celebrated around the world by a rather extraordinary people.  The festival I am referring to is the Jewish Feast of Tabernacles, also known as Sukkot or Feast of Booths.  Since it follows the Jewish lunar calendar it moves from year to year in our calendar (like Easter does), but it is  always celebrated sometime in September-October.  In 2018 it will be celebrated from Sept 23 – Sept 30.

This festival was instituted by Moses to commemorate the years that the Israelites wandered in the desert after their Exodus departure from Egypt.  Therefore, Jews today celebrate the festival by living outdoors in booths or tents through the festive period.  It is thus a festival of cultural and historical meaning.

The Feast of Tabernacles (Sukkot) was one of several annual festivals established by Moses which were interspersed through the Jewish year.  Though interesting on their own account, the meaning of these festivals becomes positively intriguing when viewed through the person and career of Jesus.  Because he was a Jew, and since he lived in the Temple period, he celebrated these festivals along with his countrymen.  But on top of that, his person and life seemed to fulfill them.  From that perspective the meaning of these Festivals goes deeper still, like another layer in an onion.  For example, Jesus was crucified and died on Passover, one of these festivals.  The very day instituted by Moses to remember how lamb’s blood saved the early Israelites from death was the day his blood was shed.  This is why today Easter and Passover occur together every year.  I explored the significance of this remarkable timing here.  The coming of the Holy Spirit and the birth of what would become church occurred 50 days after Easter Sunday – exactly on the same day of another Festival started by Moses – the Feast of Weeks (or Pentecost).  I explored the significance of that here, but even without delving into the details, the fact that pivotal historical events landed on multiple festival days that were started over one thousand years beforehand is exclusive to Jewish history.  In fact, all three springtime Jewish Festivals have an exact day-to-day match to a major event in later history.

Jesus at the Feast of Tabernacles

Sukkot, being part of the Jewish autumn festivals does not have a day-to-day match with a New Testament event.  Nonetheless the parallels are striking in a different, perhaps deeper, manner still.  The Gospel of John records Jesus participating in this same Feast of Tabernacles.  But the account records Jesus doing something curious.  It says

37 On the last and greatest day of the festival, Jesus stood and said in a loud voice, “Let anyone who is thirsty come to me and drink. 38 Whoever believes in me, as Scripture has said, rivers of living water will flow from within them.” 39 By this he meant the Spirit, whom those who believed in him were later to receive. Up to that time the Spirit had not been given, since Jesus had not yet been glorified. (John 7:37-39)

Jewish Feast of Tabernacles festivities in the Temple period

To appreciate the full significance of what he said we need to know how the Jews in Bible times celebrated the Feast of Tabernacles.  Jewish history and their sacred rituals are well documented in the Old Testament and in other sources like the Talmud and Mishna.  The Jewish website http://www.templeinstitute.org/sukkot.htm explains from these sources:

At the foothills of Mount Moriah, down below in the City of David, flows a natural spring called Shiloach. This spring is ancient, and as it is located literally in the shadow of the Holy Temple, it has always had spiritual significance for Israel. It is the original source of Jerusalem’s water.

Every day of the festival [i.e. of Taberncales], the priests descended down to the Shiloach, accompanied by all the congregation assembled in the Temple. There, they filled a golden flask … of the pure water. Ascending back up, carrying the flask with song … the gathering entered back into the Temple through the Water Gate, one of the gates on the southern side of the court (it received its name on account of this event (Shekalim 6, 3). As they entered the gate, their steps were greeted by the sound of trumpets and shofar-blasts, …

Once in the Temple, the priest who had the honor of performing this service now carries the golden flask up the altar ramp. … which took place on exculsively on Sukkot.

“With joy you shall draw water out of the wells of salvation” (Isaiah 12:3).

Based on this verse, the drawing of water from the Shiloach spring and its libation upon the altar of G-d was accompanied by great rejoicing and celebration in the Holy Temple. In fact, this joy was so immense, and the celebrations so uplifting, that the sages of Israel emphatically stated:

“Whoever has never seen the celebrations of the Festival of the Water Libation-has never experienced true joy in his life” (ibid. 5, 1).

But what was the cause of such great happiness, to the extent that this statement was recorded for all posterity? Indeed, what could be so moving about the simple act of gathering up some water, and pouring it onto the altar? … 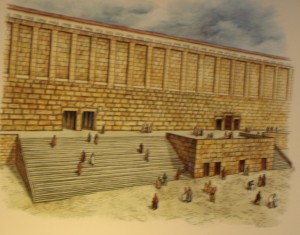 So Jesus used the context of the joyful ceremonial gathering of pure water poured on the altar in the Temple during the Feast of Tabernacles to point to himself as likewise giving ‘living water’ to anyone who is ‘thirsty’.  His self-portrait was made vivid in that context to his hearers.

The curious response of Jesus’ hearers 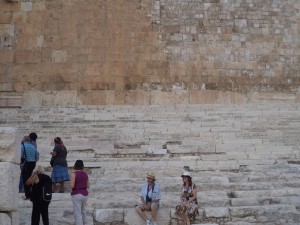 Photo of the steps leading to Jerusalem Water Gate for Festival of Tabernacles. Jesus would have walked them along with other pilgrims in his day

But still, the response of his hearers seems perhaps a bit excessive.  When they heard his declaration their response was:

40 On hearing his words, some of the people said, “Surely this man is the Prophet.”

How did Jesus’ hearers go from Jesus’ statement of ‘living water’ to think ‘Messiah’?  At first glance there seems to be no natural connection. 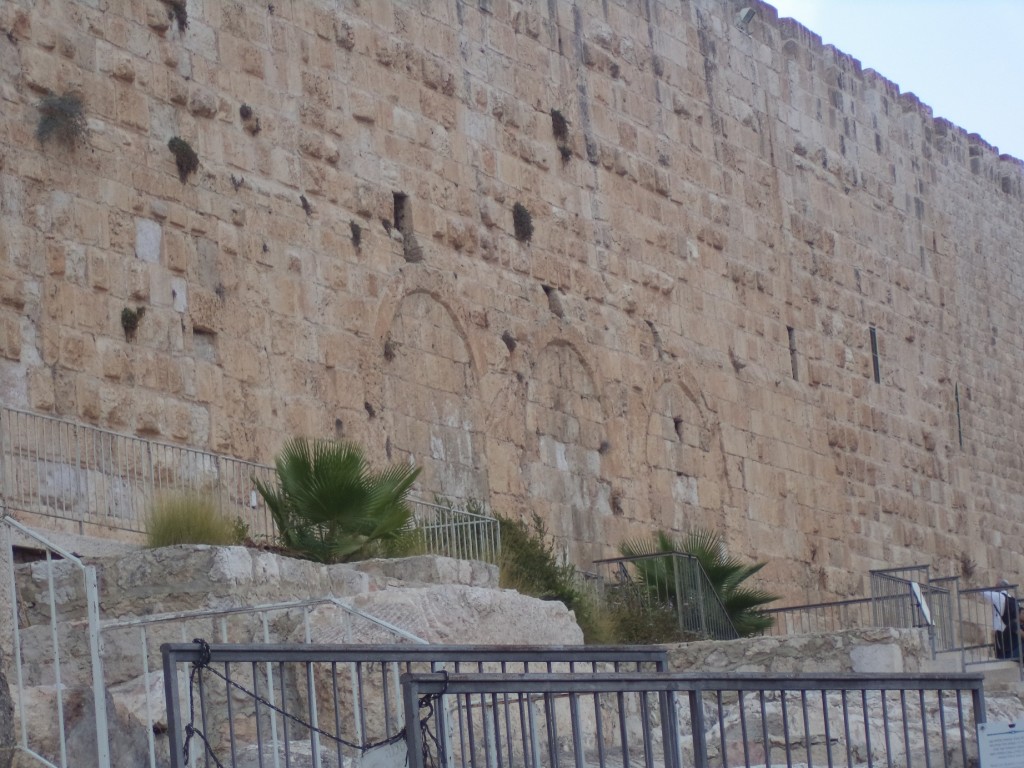 Ancient Jerusalem Water Gate outline can be seen, but it is now sealed

However, there is one key Old Testament passage describing the Feast of Tabernacles and ‘living water’.  But I have to warn you now – it is so apocalyptic that it may not be pleasant to unpack. 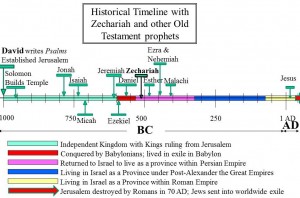 Zechariah wrote of a coming day when:

A day of the Lord is coming, Jerusalem, when … 2 I will gather all the nations to Jerusalem to fight against it … 3 Then the Lord will go out and fight against those nations, as he fights on a day of battle. 4 On that day his feet will stand on the Mount of Olives, east of Jerusalem, and the Mount of Olives will be split in two from east to west, forming a great valley, with half of the mountain moving north and half moving south…

6 On that day there will be neither sunlight nor cold, frosty darkness. 7 It will be a unique day—a day known only to the Lord—with no distinction between day and night. When evening comes, there will be light.

8 On that day living water will flow out from Jerusalem, half of it east to the Dead Sea and half of it west to the Mediterranean Sea, in summer and in winter.

The Lord will be king over the whole earth. On that day there will be one Lord, and his name the only name.


Here we have a convergence of ‘living water’, the ‘Feast of Tabernacles’ and ‘all the nations’ along with Someone who is ‘King’ and ‘Lord’.  If we understand where the term ‘Messiah’ (= Christ) comes from we will see that this Someone was the Messiah.  This is an Old Testament messianic prophecy.  Hearing Jesus talking about ‘Living Water’ at the Feast of Tabernacles would have reminded his Jewish audience of this very passage and so they would have thought ‘Messiah’.  Hence their response to his Feast of Tabernacles cry.  It is just that Zechariah does not seem to describe Jesus to our modern-day minds.

Zechariah and the ‘one they have pierced’

But that is because I started the quote of Zechariah partway through his prophecy.  It actually begins two chapters earlier.  If we start at that beginning the meaning goes deeper still;

A prophecy: The word of the Lord concerning Israel.

Mourning for the One They Pierced

10 “And I will pour out on the house of David and the inhabitants of Jerusalem a spirit of grace and supplication. They will look on me, the one they have pierced, and they will mourn for him as one mourns for an only child, and grieve bitterly for him as one grieves for a firstborn son…

“On that day a fountain will be opened to the house of David and the inhabitants of Jerusalem, to cleanse them from sin and impurity.  (Zechariah 12:1 – 13:1)

Whether one believes in the Biblical prophets or not, it is clear that in this passage the speaker (the ‘I’) is God, since he “stretches out the heavens … who forms the human spirit within a person” (v. 1).  He is warning of a future day, a terrible day when nations will be destroyed.  But paradoxically the mourning and grief will not center in those nations facing destruction, but rather in Jerusalem, being rescued from destruction by a ‘one they have pierced’.  Who would that be?  Let the descriptions by Isaiah and the Psalmist of one being ‘pierced’ help you answer that question.  Zechariah himself predicted his name.  Yet the pierced one is still, by using the pronoun ‘me’, the same ‘I’ who stretched the heavens and forms the human spirit in a person.  Pretty heady stuff.

This takes us full circle back to the Feast of Tabernacles.  The website describing the Sukkot celebration in Bible times details the prayers that were sung by the pilgrims back then.  It explains

The hallel prayer, a collection of songs of thanksgiving and praise to the Almighty, is one of the oldest and most original examples of traditional Jewish liturgy. It consists of the following chapters from the book of Psalms: 113-118

Therefore, the ending of the hallel prayer which pilgrims (including Jesus) sang on that Feast of Tabernacles when Jesus cried out about ‘Living Water’ was the following from Psalm 118

The stone the builders rejected has become the cornerstone; (Psalm 118: 22)

The Feast of Tabernacles hallel prayer uncannily predicted the career and legacy of Jesus.  Jesus used this very phrase to describe himself when challenged by the Jewish leaders just before his ‘piercing’.  He saw himself as the stone rejected that would become the cornerstone.  And it was sung every Feast of Tabernacles by devout Jewish pilgrims.  Zechariah predicted that complete recognition of this would be accompanied by cataclysmic, even apocalyptic, events.

The ancient 3500 year old Feast of Tabernacles opens many layers of meaning, spanning history and theology, when considered through the person of Jesus Christ.

4 thoughts on “The Feast of Tabernacles: layered like an onion … with meaning”