In the Welcome Article for this blogsite I raised the remarkable phenomenon of how the gospel spread so quickly and pervasively when it burst onto Greco-Rome of classical times – even though it was met with ferocious and bloody opposition from that same world.  So what fueled such a forceful advance?  Several reasons stand out, but the one that I want to focus on for the next while has to do with what the people of that era saw in the Bible of their day.  But to better  appreciate what they saw, we need to re-discover their Bible since it has become a mostly forgotten book in our day.  So with this endgoal in mind, I introduce the Bible of that era – the Septuagint.  But first let’s back up abit in history.

Historical Background to the Septuagint

When Alexander the Great conquered the then known world he brought the Greek language, culture and philosophy to the civilizations of the Mediterranean, the Middle East, and Asia.  When he died in 323 BC at the age of 32 he left behind a world that almost universally adopted the Greek language, thought and culture (known as Hellenism), thus unifying the world so that ideas and writings could be exchanged by all in one universal language – Greek.  And the Roman Empire which succeeded his short-lived conquests continued to use, and thus increase the influence of, Greek.

Greek was the principal language of the classical world from about 300 BC – 300 AD, and thus a translation of the Hebrew Old Testament into Greek was made around 200 B.C. by a group of Jewish rabbis in Alexandria (a city in Egypt present till today and founded by Alexander the Great).  Known as the Septuagint (or LXX), it was widely used in the Greco-Roman world and was of critical importance in the development of the Gospel for several reasons.

Impact of the Septuagint

First of all, the Septuagint translation was made because in that Hellenistic world the Jewish people were slowly losing their grasp of Hebrew and many were becoming primarily Greek-speakers and the LXX thus allowed them to continue reading their scriptures in their new language.  But it also allowed the writings of the Old Testament to be read and assessed by basically all Gentiles (non-Jews).  And in the spirit of that age in which philosophy, history and religion of various cultures were read, for the first time many non-Jews were exposed to the writings of the ancient Hebrew prophets.

We see the impact of this in the New Testament historical accounts.  John 12:20 tells us that Greeks (i.e. non-Jews) were worshiping at a Jewish feast in Jerusalem and asked to meet with Jesus.  Why are Greeks ‘worshiping’ at a Jewish festival in Jerusalem?  It is the influence of the Septuagint.  The book of Acts records the travels of the apostles subsequent to the ministry of Jesus and it notes how they would come upon (and even look for) non-Jewish converts to Judaism.  Why are there non-Jewish converts to Judaism dotted around the Greco-Roman world in the period 30-60 AD (the period covered by Acts)?  Again, the influence of the Septuagint having been read, heard, and brought to the attention of non-Jews for more than two hundred years had fostered this development.

And what did these people ‘see’ in the Septuagint?  For starters they saw ‘Christ’ in the pages of the Old Testament because the word was used directly in it.

The Septuagint is also significant in textual criticism.  We noted in the 2nd video of Session 3 (the one dealing with Old Testament textual reliability) that we basically have two families of Hebrew manuscripts with which we access the Hebrew Old Testament and translate it into a modern language.  The more traditional stream is the Masoretic family of manuscripts, which has extant manuscripts dating from about 900 AD.  This is the traditional source for the Old Testament in today’s Bible.  I noted that the second stream, the Dead Sea Scrolls (DSS) were only recently discovered in 1948 and are dated back to about 200 BC.  Thus in the DSS we have a much older family of manuscripts than the Masoretic text.  And I noted that these two families of texts are basically identical – showing how well preserved the Hebrew Old Testament is.

Septuagint in the Orthodox

But even more than a supplement to translate the Old Testament, followers of the Gospel in Eastern Orthodox traditions (Greek, Coptic etc.) to this day use the Septuagint over the Masoretic text (either in reading from the LXX directly or in translating primarily from the LXX rather than the Hebrew text).  It is their preferred manuscript family.

Of course, just like we do not have the originals of the Hebrew Old Testament, neither do we have the originals of the Septuagint (ie the scrolls that the original translators back in 200 BC developed).  We have manuscript copies of these.  The oldest extant manuscripts of the LXX include fragments of Leviticus and Deuteronomy dated to 2nd century BC (Rahlfs nos. 801, 819, and 957), and 1st century BC fragments of Genesis, Exodus, Leviticus, Numbers, Deuteronomy, and the Minor Prophets (Rahlfs nos. 802, 803, 805, 848, 942, and 943).  Complete manuscripts of the LXX are found in the Codex Vaticanus (325 AD) and the Codex Sinaiticus (350 AD). (See Session Three if you need a primer on what these Codices are.)

We can summarize what we have covered of the Old Testament text using a timeline shown in the figure below.  The individual books of the Old Testament were written down in Hebrew over more than a thousand year period .  They were translated into the Septuagint (LXX) around 200 BC so from then on there was a Greek as well as a Hebrew text stream.  The Codices Vaticanus and Sinaiticus (from early-mid 300’s AD) are extant copies of the LXX.  The Hebrew text was preserved by the Masoretes, from whom we have extant manuscripts dating approximately 900 AD.  The Dead Sea Scrolls was another Hebrew textual family dating to around 200-100 BC that was essentially identical to the Masoretic text.  Translations into English today primarily use the Hebrew Masoretic and Dead Sea Scrolls, but the LXX is also used to inform translators on meaning and choice of words. 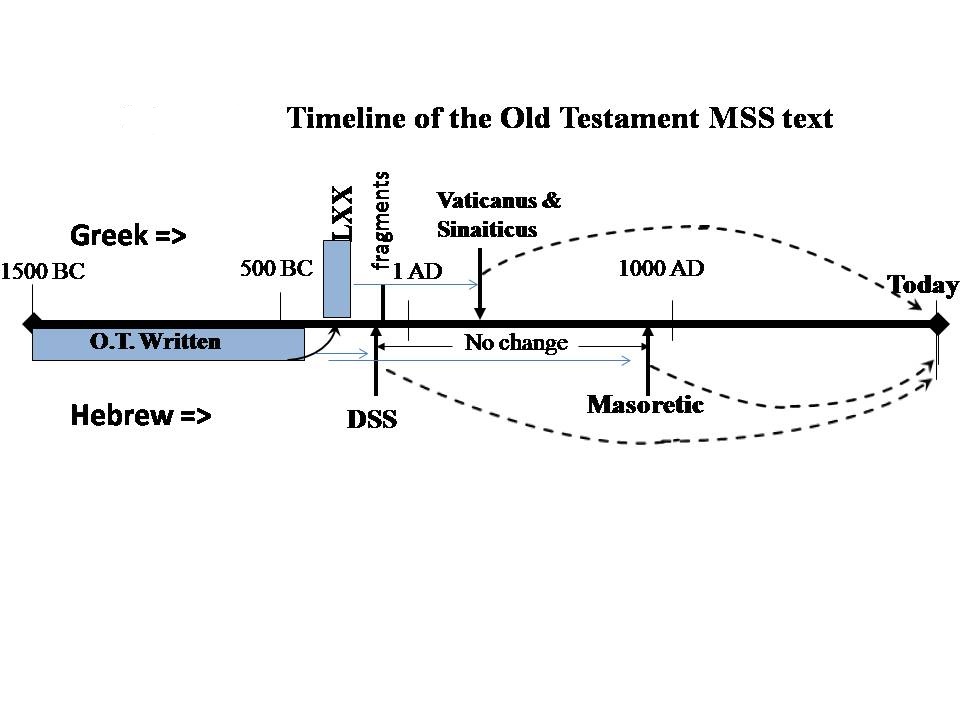 But these are not the primary reasons why the Septuagint ‘has changed human history’  We consider that in our next post.