Was there an Adam? Part 2 … Ancient Chinese & modern-day Google

In my last post I introduced Chinese ideograms as a possible way to delve into the historicity of Genesis to see if there really was an Adam. When I first saw those ideograms many years ago I thought it was rather amazing. As you look at the ideograms and de-construct them you may notice what I did – seeming overtures to the early Genesis account.

But since we can only rely on the authors whose calligraphy images I reproduced some further questions need to be addressed.

Fortunately for us, modern-day Google can allow us to explore each of these questions in a way that would have required advanced Chinese dictionaries just a few years ago. Within the ubiquitous tentacles of Google technology are language translation engines. I use it quite regularly with European language translation and even with Arabic. But it also supports Traditional and Simplified Chinese translation. The website is at http://translate.google.com. I ran some tests to explore each of these questions. Let us look at each question in turn.

Is the ‘Adam’ calligraphy script accurate?

In the figure below you will see some of my tests. Google translate allows you to type your words in the textbox on the left and Google produces a translation in the right textbox.  I typed in single words in the English box on the left to see what Google would produce as the Chinese translation (in the traditional script). Following the lead from the words of my previous post I typed in ‘soil’ and on the next line ‘man’, and then ‘first’. The Google translations appear in the box to the right. I connected the word-to-word translation by dashed arrows so you can see the translation of each word. So did Google reproduce similar calligraphy as I had in my previous post? Would we ‘see’ the elemental characters in the compound ones as per the Adam hypothesis? I also have the same images from the previous post that were put forward by the Adam hypothesis authors. 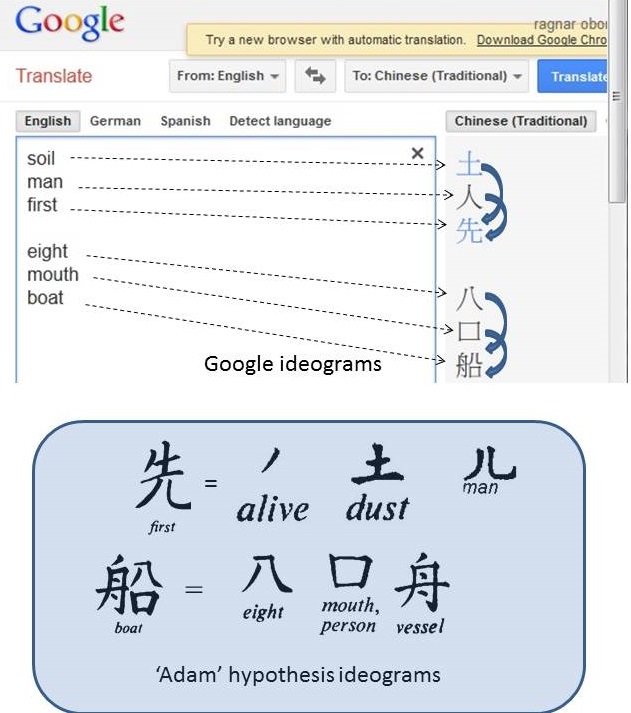 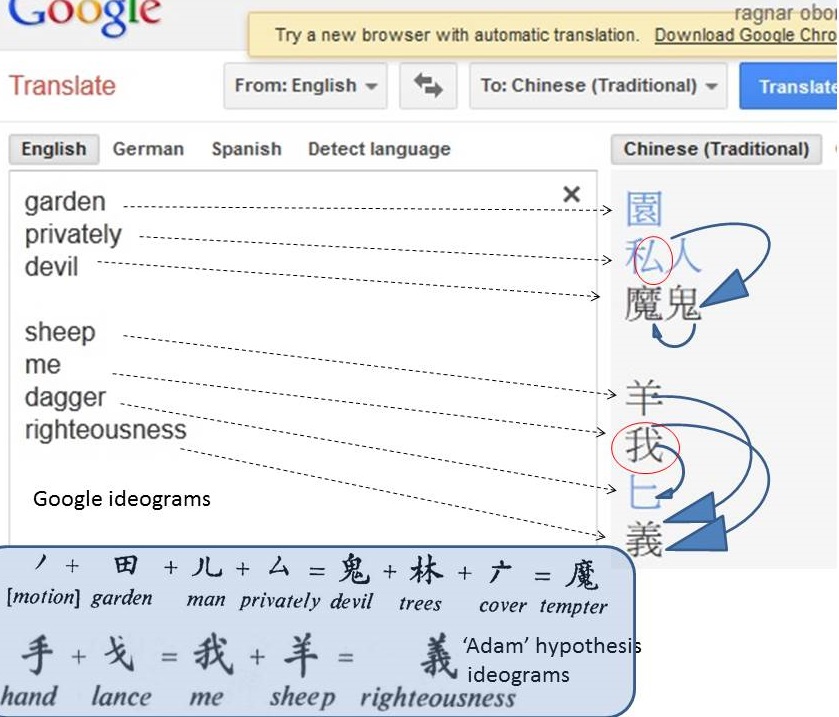 In the next figure you will see that Google renders ‘talk’ like the Adam hypothesis script and has ‘talk’ as a component of ‘create’. ‘Covet’ is also reproduced by Google, though the ‘trees’ in ‘covet’ look slightly different, more like adjacent squares. 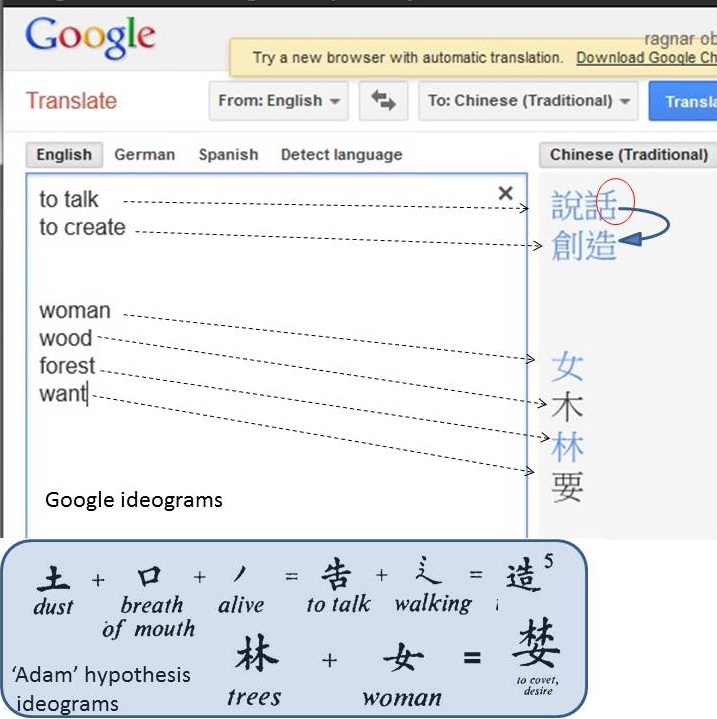 Is the relationship due to phonetics?

We have established that there is indeed a relationship as put forward by the Adam-hypothesis. Now we need to ask why there is such a relationship. Could it be phonetic? We can also test this hypothesis since Google can ‘speak’ each word. Since I cannot record the sound I transcribed the phonetic reading.  The tables below give the phonetic reading for the words we are analyzing.

It does not look like the compound words are built around the sound of the elemental words. You can easily listen to the words and determine for yourself if you detect the elemental sounds. But I had to conclude that the relationships were not primarily phonetic.  This explanation is not supported.

Are the relationships due to chance?

Could it be simply due to the fact that there are so many elemental characters combining into compound characters that some will have an ‘Adam’ link simply by chance. If it is by chance then we would expect to see similar connections with other Biblical words. If it is a random association this randomness should carry on with words. In the figure below I produced Chinese calligraphy of other biblical words and names. I cannot see any of the elemental characters in these words. 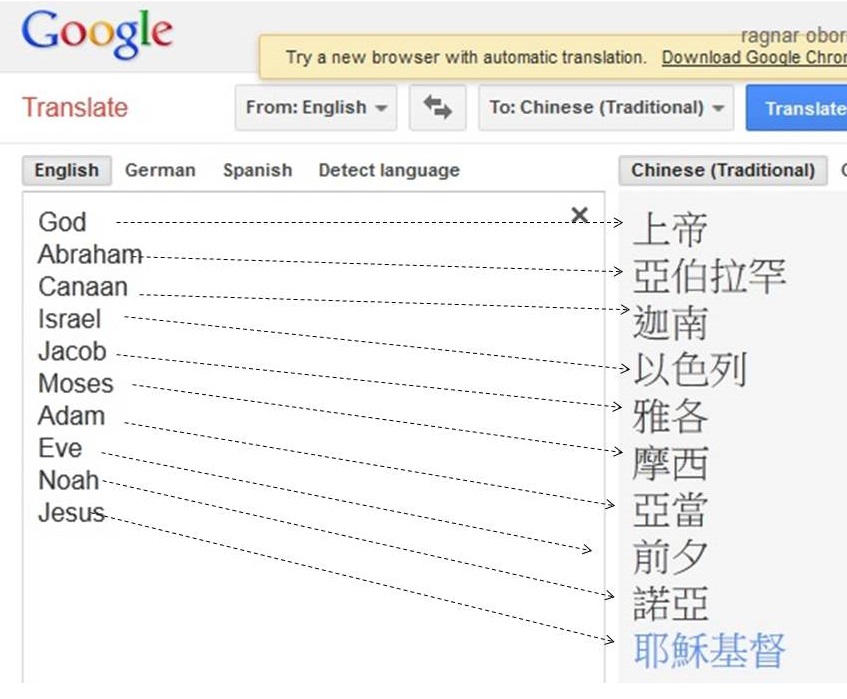 What is more revealing is the phonetics. These words sound like they are Bible words that have been transliterated with a Chinese ‘y’ sound preceding them. They are Sino-translitered, probably being grafted into Chinese when the Bible was introduced to China only within the last two hundred years.

Or is there a logical/historical connection?

It is not very difficult to see a relationship between words where you expect a logical connection. In the image below you will see how ‘God’ is an element of ‘sacred’. An element of ‘sacred’ can be seen to be in the word for ‘Bible’. But ‘Bible’ also has an element of ‘news’ or ‘message’ in it. So it is like the word ‘Bible’ is comprised of elements of ‘God’ + ‘sacred’ + ‘news/message’. This makes perfect logical sense.  Similarly we see the element ‘water’ in both ‘ice’ and ‘steam’.  Knowing there was a logical connection between these words I typed them into Google translate to see if I could find a calligraphy connection. And we are not surprised when we see such a connection. 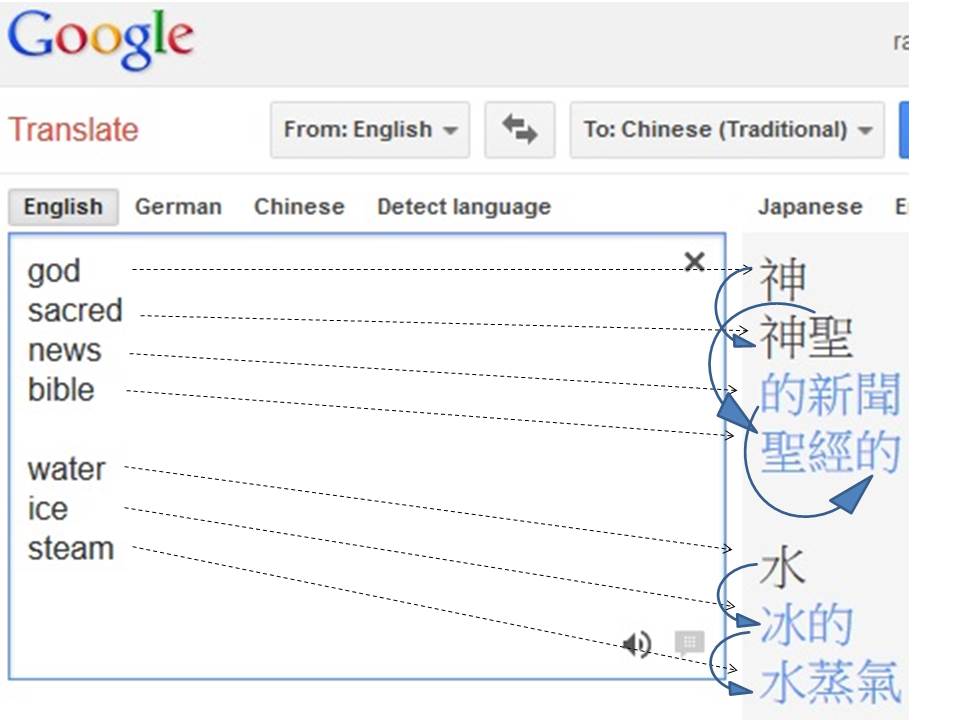 The words for ‘boat’ and ‘devil’ that we looked at in the previous post look like they have the same kind of connection between the elemental and the compound as exhibited here with Bible=sacred+news+God and water being in ice and steam. But what logical connection is there between ‘eight’ and ‘boat’, between ‘gardens’ and ‘devils’? There is none. Yet it seems like the ancient Chinese, when they developed their calligraphy had these connections in their minds. One might even think the Chinese read Genesis and borrowed from it, but the origin of their language predates Moses by 700 years. Since China and the Middle East are so distant from each other it is difficult to imagine there was much exchange of ideas.

The idea of a logical connection between ‘eight’ and ‘boat’ to the ancient Chinese makes sense if these events in Genesis were remembered by them as their recent history. Temptations in the Garden and eight people in a boat would make perfect sense to them. Shem, son of Noah, would be telling them these stories himself.

If this scenario is true we would expect this historical parallel to end with the Genesis account of the Tower of Babel (Genesis 11) because it is at that point that the different linguistic and racial groups were separated. From that point on the Chinese had their own history. Before that point history was a common, universal experience – with one language. From this perspective the Chinese word for ‘Tower’ is intriguing. The figure below shows that ‘Tower’ is a compound of ‘one’+’mouth’+ ‘mankind’ (mankind in one language) +’grass’ (or ‘weeds’  – symbolizing frustration) + ‘clay’.

The image from Google translated below confirms this calligraphy. It is reminiscent of the opening account of Genesis 11 which says

Now the whole world had one language and a common speech… They said to each other, “Come, let’s make bricks and bake them thoroughly.” They used brick instead of stone, and tar for mortar.  Then they said, “Come, let us build ourselves a city, with a tower that reaches to the heavens, (Genesis 11:1-4) 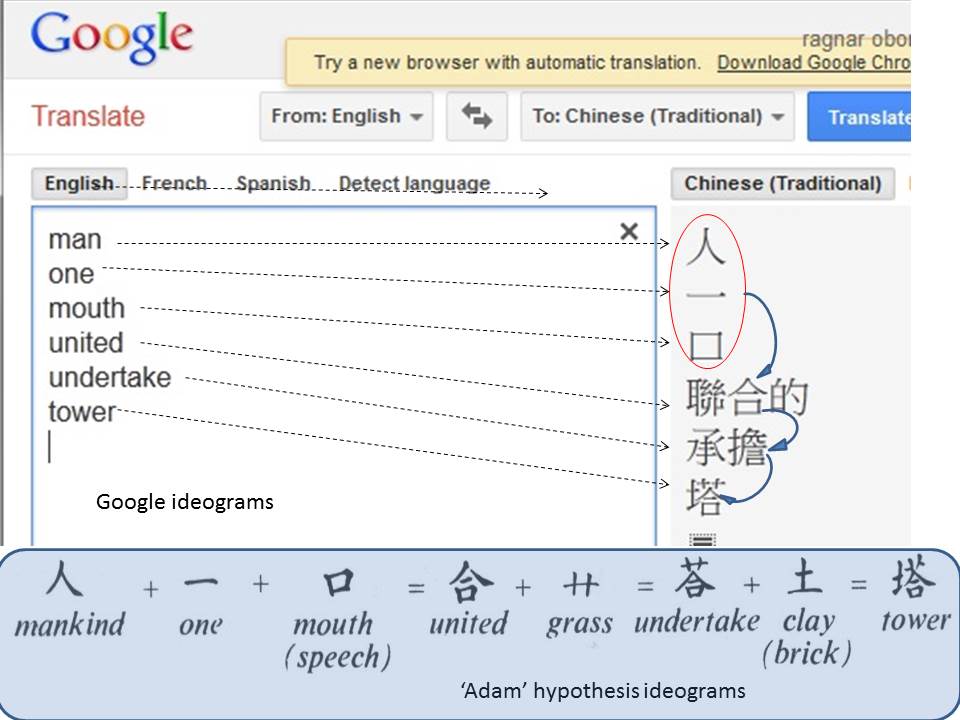 It would seem that there is evidence that the ancient Chinese remembered these events as part of their history. From this point on their history diverged from that of the Hebrews and thus there are no logical or historical connections after this point. The accounts of Abraham and Moses are not embedded in their language since by that time they were separate nations.

At the very least I found these Google tests  to be intriguing and the Adam-hypothesis emerged even stronger than when I had started. The other possible explanations were not supported and so had to be rejected.  There is more that could be written about this, especially delving into the Chinese calligraphy that has been preserved on ancient bones. But that is a subject for another day. Before we leave this thread to consider the crucifixion and resurrection of Jesus (we are in Lent after all) there are two final comments to add.

We were reading Genesis 6 with Chinese scholars last week. We were studying the story of the flood and they were reading it for the first time. We came to the account of Shem, son of Noah, when one of the Chinese scholars told me that ‘Shem’ was the name of the ancestor of the Chinese.  He had read it in an ancient Chinese book and it sounded just the same. I am hoping he can bring me some information about this book. Perhaps it will be worth a post one day.

And finally, it is not just the Chinese who have this Adam-echo in their calligraphy. The Japanese have it as well as you can see from my Google figure below. 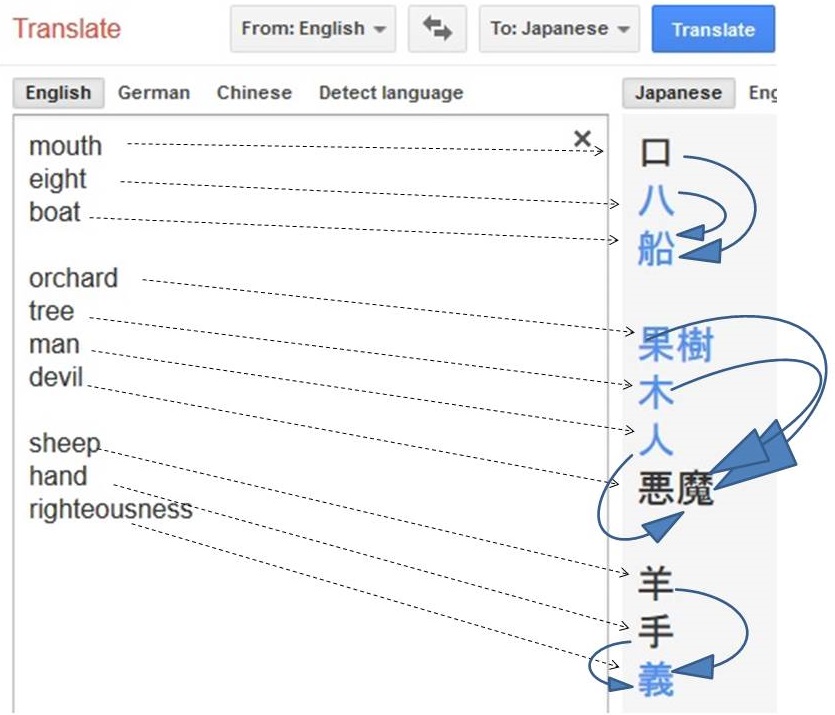 1 thought on “Was there an Adam? Part 2 … Ancient Chinese & modern-day Google”