The Sign of the Branch (Part 1): The Dead Stump Reborn

One of the claims that Jesus put before the critics that he faced in his day was that:

… These are the very Scriptures that testify about me… (John 5:39)

In other words, Jesus claimed that his life and career was predicted and prophesied by the Old Testament books written by the Hebrew prophets that preceded him by hundreds of years. These prophets had claimed that God inspired their writings. Since no human mind can predict in such detail hundreds of years into the future, this became a line of evidence that Jesus said his contemporaries could use to verify if indeed Jesus came as part of a Divine Plan or if the whole gospel account was the product of some elaborate human scheme. Two thousand years later, the data that Jesus referred to is still available for us to examine and consider for ourselves.

We are now in the season of Lent with Easter fast approaching. The Easter season is certainly an opportune time to consider and assess how and if Jesus fulfills the gospel and if the Old Testament prophets did indeed testify about him. So I plan to take the next few posts to see if and how the Old Testament bears on Jesus and Easter.

First let’s do some review. We had seen that Psalm 2 was where the term ‘Christ’ as a title of a specific person who was to come was first given. Psalm 2 was written ca 1000 BC. We also saw that Daniel predicted a special coming person and these two passages together predict the coming of someone who will be alternatively called: Son of God, Son of Man, Anointed One, Messiah, and Christ. The whole tone and thrust of these scriptures was future-looking. They were anticipating someone. But it did not end there. Much more was written in a prophetic, future-looking direction. Other titles and themes were developed. Isaiah (750 BC) started an intriguing title that later Old Testament books picked up on and developed into a fully-fledged theme – that of the coming Branch.

Isaiah and The Branch

The figure below shows Isaiah in a historical timeline with some other Old Testament writers. 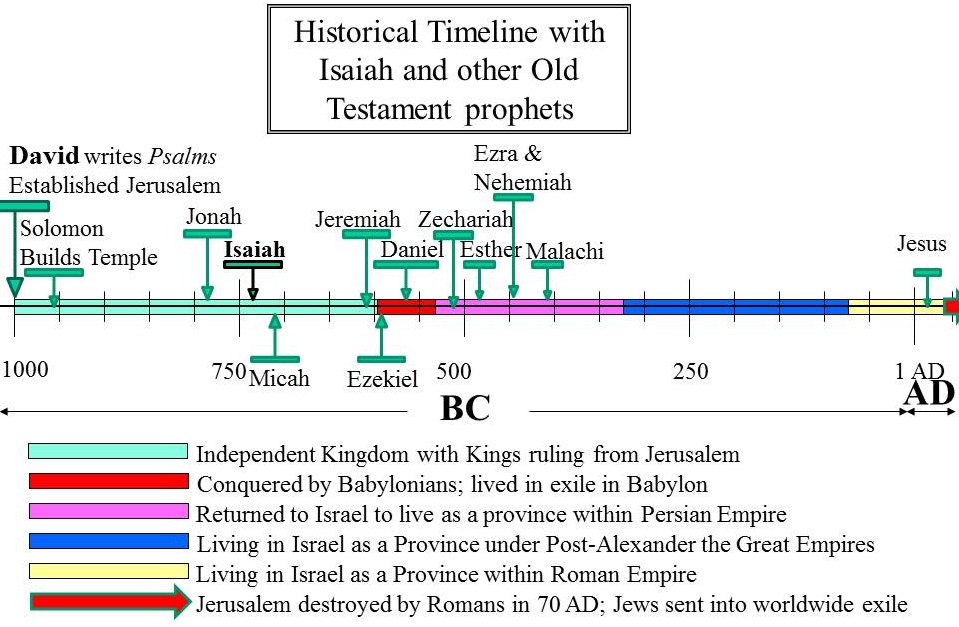 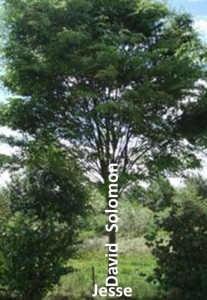 The image Isaiah used of the Dynasty as a tree

Davidic Royal dynasty (1000 – 600 BC). [see here for overview of Israelite history].  When it was written (ca 750 BC) the dynasty and kingdom was corrupt. Isaiah was written as a plea to return back to God and the practice and spirit of the Mosaic Law. But Isaiah knew that this repentant return would not happen and thus he also predicted that the country would be destroyed and the royal dynasty would be shattered.

He used a specific metaphor, or image, for the royal dynasty where he pictured it like a great tree. This tree had at its root Jesse, the father of King David. Upon Jesse the Dynasty was started with David, and from his successor, Solomon, the tree continued to grow and develop.

First a Tree … then a Stump … then a Branch

But then Isaiah wrote that this dynastic ‘tree’ would soon be cut down, reducing it to a stump. But along with all this warning came this intriguing prophetic riddle:

“A shoot will come up from the stump of Jesse; from his roots a Branch will bear fruit. The Spirit of the LORD will rest on him–the Spirit of wisdom and understanding, the Spirit of counsel and of power, the Spirit of knowledge.” (Isaiah 11:1-2)

The cutting down of this ‘tree’ happened about 150 years after Isaiah, around 600 BC, when the Babylonians conquered Jerusalem and dragged its people and king into exile to Babylon (the red period in the timeline above). Jesse was the father of King David, and thus the root of the Davidic Dynasty. 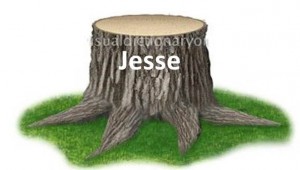 He would be the counterpart to the father of Elendil, the founder of the dynasty of Kings of Gondor in the Lord of the Rings. The ‘stump of Jesse’ was therefore an allusion to the (coming) shattered and broken dynasty of kings from David.

The Branch: A coming ‘him’ from David possessing wisdom

But this riddle simultaneously looked further into the future then the cutting down of the tree. Isaiah explicitly predicted that though the ‘stump’ (the line of David from Jesse) would to all appearances look dead, one day in the far future a shoot, known as the Branch, would emerge from that same stump, just like shoots can regenerate from real tree stumps. This Branch 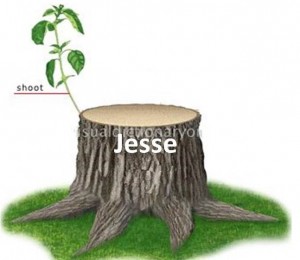 is referred to as a ‘him’ so Isaiah is talking about a coming man, coming from the line of David after the dynasty was cut down. This man would have such qualities of wisdom, power, and knowledge it would be as if the very Spirit of God would be resting on him.

Jesus … A ‘him’ from David possessing wisdom

We have seen how Jewish scholars, even though hostile witnesses, placed Jesus in the royal line of David, just as the Gospel writers did. Jesus fits the criterion of coming ‘from the stump of Jesse’. The very startling thing about the accounts of Jesus in the gospels is the wisdom and understanding he possessed. His shrewdness, poise and insight in dealing with opponents and followers alike in his day continue to impress both critics and followers ever since. And though he did not rule, his power in the gospels through miracles is undeniable. One may choose not to believe them; but one cannot ignore them. As well as in coming from the line of David, Jesus fits the criterion of possessing exceptional qualities of wisdom and power that Isaiah predicted would one day come from this Branch.

Jeremiah and The Branch

It is like a signpost laid down by Isaiah in history. But it did not end there. His signpost is but the first in a series of signs. Jeremiah, living about 150 years after Isaiah, when the 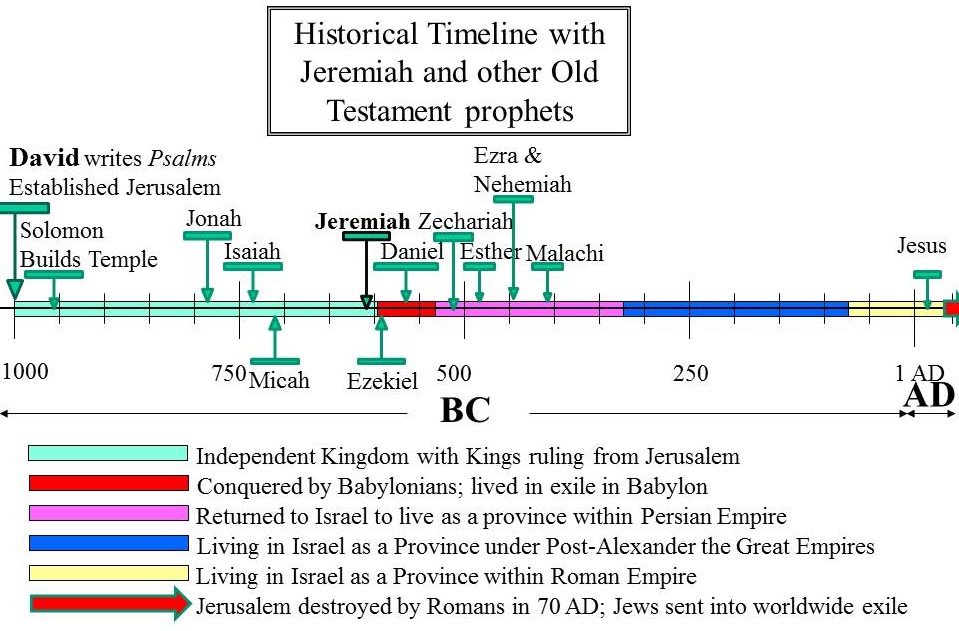 Davidic dynasty was actually being cut down before his very eyes wrote:

“The days are coming,” declares the LORD, “when I will raise up to David a righteous Branch, a King who will reign wisely and do what is just and right in the land. In his days Judah will be saved and Israel will live in safety. This is the name by which he will be called: The LORD our Righteousness“. (Jeremiah 23:5-6)

Jeremiah explicitly expands on the Branch theme of the Davidic dynasty started by Isaiah much earlier. The Branch will be a King who reigns. But this is exactly what the Psalm 2 and Daniel 7 prophecies said of the coming Son of God/Son of Man/Messiah. Could it be that the Branch and the Son of God are one and the same? Notice who is making the declaration about the Branch – it is the ‘LORD’ making this declaration.

The Branch: The LORD our Righteousness

But what is this Branch to be called? Why also none other than the ‘LORD’ (the same name) who will also be ‘our’ (that is – we humans) Righteousness. As we saw with Abraham, the overwhelming problem for humans is that we are ‘corrupt’, and thus in desperate need of ‘righteousness’. And here, in the describing of the Branch, we see a hint that people in Jeremiah’s future would obtain their needed ‘righteousness’ accredited by none other than LORD – YHWH himself (YHWH is the name for God in the Old Testament). But how would this be done? Zechariah fills in further details for us as he develops further on this theme of the Coming Branch, predicting even the name of Jesus – which we look at in our next post.

9 thoughts on “The Sign of the Branch (Part 1): The Dead Stump Reborn”