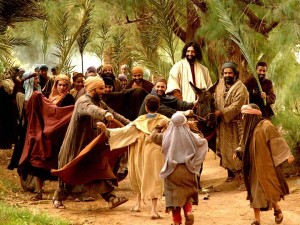 People around the globe today are commemorating Palm Sunday – the Sunday before Jesus was crucified when he rode into Jerusalem on the foal of a donkey as the long promised Coming King.  It is recorded in all of the Gospels as a watershed event which set in motion the crisis of that Passover Week.

I believe the Gospel for several reasons, but very high up on the list are the widespread, diverse and testable prophecies that, in spite of the vanishingly impossible odds, are fulfilled sometimes hundreds of years after the prophecies were first written down.  I had shown how Daniel (ca 550 BC) had predicted the interval of time to the coming of this awaited King.  This was fulfilled precisely on that Palm Sunday when Jesus rode into Jerusalem on a donkey.  Because of the long time span involved – over 500 years – this meant that the chance that his birth would even just fall in the proper time frame for there to be a chance that he could be around to ride into Jerusalem would itself be startlingly improbable.   Jesus could not have humanly engineered the timing of such a scope.

But the gospel writers do not focus on this timing when they record the events of that Sunday.  Instead they direct our attention to the book of Zechariah (ca 520 BC) and explicitly tell us that when Jesus rode into Jerusalem on a donkey he was fulfilling the prophecy given in Zechariah that:

Now this fulfillment that the Gospel writers trumpet had never really impressed me for the simple reason that it seemed too easy to plot a ‘fulfillment’.  All that Jesus needed to do was to read Zechariah and recognize that to get a ‘fulfillment’ he would need to ride into Jerusalem on a donkey.  The timing of his entrance aside (which I think is impossible to explain naturally), it would be a simple matter for Jesus to plot his entrance into Jerusalem for the Passover festival and make sure he came in on the donkey as per Zechariah’s script.  And being a lowly peasant it would be easier for Jesus to hatch such a plot than for him to procure a war horse – the steed of choice when kings make their entrances.  So could that entry simply be explained as the plotting of a man using an ancient script to ride a Passover exuberance?

So let’s take the trouble to read the original Zechariah prophecy in its full context and consider such a ‘Passover Plot’ conspiracy.  Here it is:

10 I will remove the battle chariots from Israel
and the warhorses from Jerusalem.
I will destroy all the weapons used in battle,
and your king will bring peace to the nations.
His realm will stretch from sea to sea
and from the Euphrates River to the ends of the earth.
11 Because of the covenant I made with you,
sealed with blood,
I will free your prisoners
from death in a waterless dungeon.
12 Come back to the place of safety,
all you prisoners who still have hope!
I promise this very day
that I will repay two blessings for each of your troubles. (Zechariah 9:9-12)

What jumps out is the bizarre change of scope that spans these few sentences.  The king enters Jerusalem on a donkey (v9) and then his rule will extend to ‘the ends of the earth’ (v10).  And God will seal a covenant ‘with blood’ such that prisoners of death will be freed (v11).  Zechariah saw and predicted something of far greater scope than just an entry to a city on a donkey.  According to Zechariah, tied with this entry would be a new worldwide program as well as a new destiny for ‘prisoners of death’.

Today, the news outlets across Canada are reporting on the sudden and unexpected death of the recent Canadian Finance Minister Jim Flaherty.  He was considered one of the most successful and influential finance ministers in Canadian history.  He retired three weeks ago in the media spotlight to transition his career.  Today he is dead and his sudden and abrupt death has shocked and saddened everyone.  I submit that he is a ‘prisoner of death’.  Though he had been chief of the finance department, his success and prominence there gave him no advantage in this department of death.   And we too are all following along right behind him – not knowing when or how we will die.  We all are ‘prisoners of death’!  Zechariah was writing this 2500 years ago for you and me.  He was telling us that someone was going to come who would free us from this prison.  But how?  Zechariah explained long before Jesus rode the donkey into Jerusalem that it would be done by God making a covenant ‘sealed with blood’ (v11) – echoing the sign of the Passover Blood and the release from death that Isaac experienced in Abraham’s sacrifice.  A few short days after Jesus rode into Jerusalem atop his donkey on Palm Sunday he did indeed inaugurate a new covenant and then literally sealed it with his blood.  And three days after that he rose from the dead.  The doors of that prison which holds us all busted open.  The fact that Zechariah could see it so long before it happened indicates that the entry of Jesus on the donkey was not the desperate plot of a pitiful man, but rather it was a key sign marking a Providential Program for the largest jailbreak imaginable – to spring all of humanity from the prison of death.  The entry of Jesus into Jerusalem on a donkey was prominent for the gospel writers precisely because they saw it as a key sign marking that larger Providential Program that Zechariah had sketched out 500 years earlier.

But what about this rule that Zechariah wrote would go to the ‘ends of the earth’?  Jesus never ruled – the prophecy is in error, critics will charge.  But to think of ‘ruling’ solely in political or military terms is to miss the most powerful rule of all – the personal allegiance of a one’s heart freely given in worship.  Though Jim Flaherty was a senior member of the party that ‘rules’ in Canada, he never had that kind of rule over one single person in the entire country.  But Jesus at his trial calmly claimed that he would one day get this rule – worship – from people around the world.  Here we are two thousand years later with Palm Sunday inaugurating Passion Week which will be celebrated in worship by people around the world, in all nations, in a multitude of languages.  From that point of view Zechariah’s prediction of a rule ‘to the ends of the earth’ was indeed fulfilled by that peasant carpenter who rode into Jerusalem on a lowly donkey so many Sundays ago.

But what about the removal of all weapons of war from Israel (v10)?  That certainly has not happened. In fact today Israel is one of the most weaponized countries in the world!  True enough.  But that prediction is anticipating the conclusion in this Providential Program.  We are not there yet.  We are now at the stage exemplified in v12 where the plea and offer is going out to all us prisoners of death to come to his place of safety.  The news and offer of the ‘jailbreak’ is going around the world and many are choosing to take it.

In the context of this larger Program, Zechariah predicted that this King would make another entrance.  He wrote

“Then I will pour out a spirit of grace and prayer on the family of David and on the people of Jerusalem. They will look on me whom they have pierced and mourn for him as for an only son. They will grieve bitterly for him as for a firstborn son who has died.  (Zechariah 13:10)

The one that had been pierced and had died, and in so doing had sealed that covenant with his blood, will come back!  It is a hope I have, and some may charge me with naïvity for keeping it.  But given that Zechariah was bang on with both the details and the outworkings of that entrance on a donkey, it is simply a reasoned leap to trust that this Second Entrance in this greater Program of Providence will also one day come about.  And when it does, I want to be part of the jailbreak.