The Branch: Sprouting Exactly in time to be … ‘cut off’

We have been exploring the Branch theme that extends through the writings of several of the Old Testament prophets. We saw that Jeremiah in 600 BC had picked up the theme begun by Isaiah 150 years earlier in declaring that this Branch would be a King. In our previous post we saw that Zechariah, following from Jeremiah predicted that this Branch would be named Jesus and that he would combine the roles of King and Priest into one – something that had never occurred previously in Israelite history.

Daniel’s riddle of the scheduled arrival of the Anointed One

But it did not end there. Daniel, sandwiched in time between Jeremiah and Zechariah, directly picked up the title of ‘Anointed One’ (which we saw here = ‘Christ’ or ‘Messiah), at the same time alluding to the Branch theme in a fascinating riddle that predicted when the Messiah would be revealed. Around 538 BC he wrote the following:

Since Anointed One = Christ = Messiah, as we saw here, we know that Daniel was writing about the coming Christ. Daniel specifies a start time (“issuing of a decree to restore and rebuild Jerusalem”) and a specific time interval (“seven ‘sevens’ and sixty-two ‘sevens’”) which will culminate in the revealing of the Christ (= Anointed One) who will then mysteriously be ‘cut off’. The overall structure of this prediction seems clear enough. But can we understand the specifics so that we can actually track this revealing of the Christ? Let’s begin by looking at what triggered the ticking of this prophetic clock.

The Issuing of the decree to restore and rebuild Jerusalem

About 100 years after Daniel, Nehemiah was cupbearer to the Persian Emperor Artaxerxes. As such he was a man who had access to the very highest power in the Persian Empire. In that context he asks for and receives a royal decree to restore and rebuild Jerusalem. Here is how he states it.

In the month of Nisan in the twentieth year of King Artaxerxes… I answered the king, ‘If it pleases the king and if your servant has found favour in his sight, let him send me to the city in Judah where my ancestors are buried so that I can rebuild it.’…

7 I also said to him, ‘If it pleases the king, may I have letters to the governors …”. [And] the king granted my requests. So I went to the governors … and gave them the king’s letters. The king had also sent army officers and cavalry with me. (Nehemiah 2:1-9)

So here we see a royal decree, backed with letters and the military of the Persian Empire to rebuild and restore Jerusalem. Since the Persian Emperor Artaxerxes is known in secular history, and since this decree specifies the start of this period in terms of Artaxerxes’ reign (20th year of reign in the month of Nisan), we can determine when this was. Artaxerxes ascended to the Persian throne immediately after the death of his father Xerxes in December 465 BC. (1) and since this decree was issued in Nisan 1 (March/April) of his 20th year this would put the issuing of the decree at March 5, 444 BC (1).

But what are these ‘sevens’ that Daniel was using to track the passing of time? In the Law of Moses there was a cycle of seven years whereby the land was to be rested from agricultural cultivation every seventh year. It was stated in the following way

The context of Daniel’s statement is ‘years’, and using this line of reasoning, by ‘sevens’ he is writing along these cycles of seven years. In that case the Seven ‘Sevens’ and Sixty-two ‘Sevens’ can be stated arithmetically as (7+62) * 7 = 483 years.

Complicating things somewhat is the length of year used. Today we use the solar year (=365.24219879 days per year) because we can precisely measure the revolution of the earth around the sun. In those days it was common to base the year from revolutions of the moon (as the Islamic calendar does still today) giving 354 days/year or by using 12 30-day months giving 360 days per year. In all cases there is some adjusting done to ‘fix up’ the differences in revolutions. (In our Western calendar we use the leap year – 366 days – to adjust for the fractional day, with some leap years being skipped.) In ancient Egyptian, Babylonian, Indian and Greek civilizations a 360 day calendar was common. This seems to be the basis for these years in Daniel. Further reasons for using a 360 day year are given here.

The Scheduled Arrival of the Christ

With this background information it is now fairly simple to calculate when the Christ was to arrive as per Daniel’s riddle. 483 years with 360 days/year will give us:

If we now take the 25 remaining days and add them to March 5, 33 AD we come to March 30, 33 AD, illustrated in the timeline below. Or as Hoehner (whose calculations I have been following) states 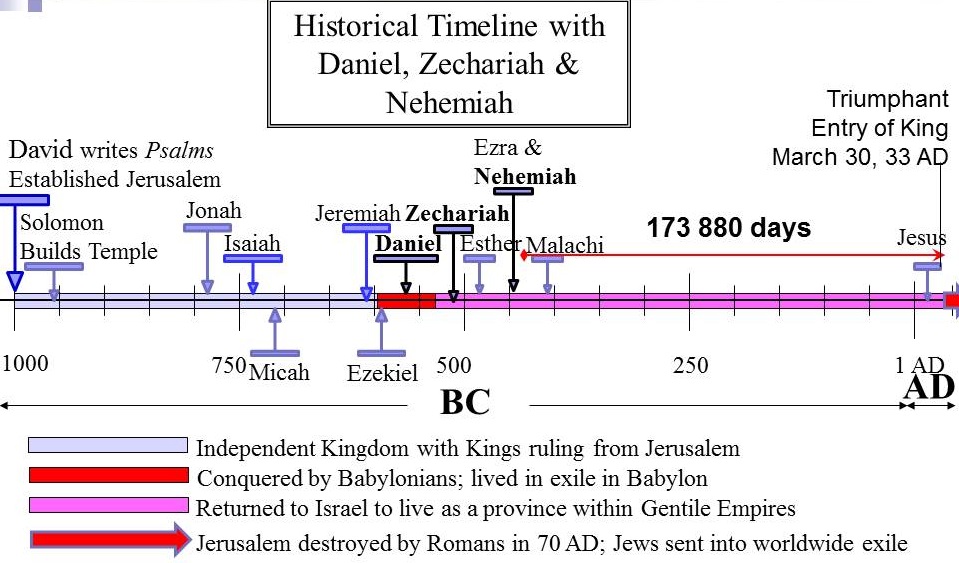 Triumphant Entry of Jesus – That Day

Today as I write this post, it is Palm Sunday, the very day we remember the triumphant entry of Jesus into Jerusalem. Making the assumptions that we have done above and using some basic arithmetic we find that this is the day that Daniel’s riddle of the ‘sevens’ lands us on. This is the day that Jesus was presented as the King or Christ to the Jewish nation. We know this because Zechariah (who had predicted the name of the Christ) had also written that:

Rejoice greatly! Shout, Daughter of Jerusalem! See, your king comes to you, righteous and having salvation, gentle and riding on a donkey, on a colt, the foal of a donkey. (Zechariah 9:9)

When he came near the place where the road goes down the Mount of Olives, the whole crowd of disciples began joyfully to praise God in loud voices for all the miracles they had seen:

‘Blessed is the king who comes in the name of the Lord! Peace in heaven and glory in the highest!’…

As he approached Jerusalem and saw the city, he wept over it and said, ‘If you, even you, had only known on this day what would bring you peace – but now it is hidden from your eyes. (Luke 19:37-42)

… After the sixty-two ‘sevens’ the Anointed One will be cut off and will have nothing…” (Daniel 9:26)

Instead of taking the throne to rule, the Christ would be ‘cut off’ and would have ‘nothing’. In using this phrase ‘cut off’ (some Bibles just translate it ‘will die’) Daniel alludes to that theme of the Branch, that shoot from the stump of Jesse, begun long before by Isaiah, elaborated by Jeremiah, the name predicted by Zechariah and now the time and signature foreseen by Daniel and Zechariah in tandem. This Branch would be ‘cut off’. But how would this Branch be ‘cut off’? We return to Isaiah in our next post to see a vivid description.

1) Reference used throughout is Chronological Aspects of the Life of Christ
Part VI: Harold W. Hoehner

1 thought on “The Branch: Sprouting Exactly in time to be … ‘cut off’”