Prudence in the rising wake of an ancient Apocalyptic Speech

The Bible unapologetically tilts to the future. From the Beginning back in the Garden to the very last chapter of the last book there is a steady stream of prophecies directing our thoughts to events yet to come. You can recognize these predictions by the repeated use of ‘will’ – as in the future-tense verb. Such-and-such ‘will’ happen is stated again and again throughout the Book.

There are no doubt many reasons for this. For starters, since no human knows the future, it serves as a testable signature to verify if indeed there is a Divine Mind behind those writings, separating would be pretenders from the Real. Reflect on how key events of Abraham as well as the Passover fit like a key in a lock with the crucifixion of Jesus. Prophecies as predictions of the future thus help our minds recognize truth.

Our lives are also full of trials and heartaches wherein we regularly suffer profound loss. We long for a better world and many of us despair that it will ever come about. So we need encouragement. Many Bible prophecies look to a better future and are given as encouragement so we do not lose hope. “The Kingdom of God will be established and peace one day will reign – so do not give up now” is the thrust of many prophecies, providing needed comfort, strengthening us emotionally.

But there is yet another reason for prophecies. Some confront our wills – the part of us that makes choices – to warn us of hard consequences in the future if we do not change the direction we have chosen for ourselves. These are probably the most difficult for us to accept (at least that is true for me) precisely because they oppose our inborn tendency of not wanting anyone, whether God or man, to speak warning into our lives.

Some prophecies combine all these elements. And no prophet does so with better effect than Jesus himself. He gave future-looking prophecies, apocalyptic even, that somehow provide comfort, engage our minds – and yet still confront our wills.

Events this week brought one of his apocalyptic speeches to my mind, causing me to ask whether we are seeing it (parts at least) unfolding in front of our eyes – and on our websites and TV screens. The complete discourse is in the link here. Below are  highlights.

Some of his disciples were remarking about how the temple was adorned with beautiful stones and with gifts dedicated to God. But Jesus said, 6 “As for what you see here, the time will come when not one stone will be left on another; every one of them will be thrown down.”

7 “Teacher,” they asked, “when will these things happen? And what will be the sign that they are about to take place?”

8 He replied: “… 20 When you see Jerusalem being surrounded by armies, you will know that its desolation is near. 21 Then let those who are in Judea flee to the mountains, let those in the city get out, and let those in the country not enter the city. 22 For this is the time of punishment in fulfillment of all that has been written … against this people. 24 They will fall by the sword and will be taken as prisoners to all the nations. Jerusalem will be trampled on by the Gentiles until the times of the Gentiles are fulfilled.

The phrase I underlined is a tipping point pushing people to vastly different conclusions. We know from history that the Romans sacked Jerusalem in 70 AD and expelled the Jews living there across the Roman Empire – mostly as slaves – exactly as the underlined section states. It indicates it will occur in Jesus’ future (note the ‘will’s). So is this a case of prophecy? Some say ‘yes’. But Luke authored this Gospel some years after Jesus. Perhaps he authored it after 70 AD and, knowing the events that had transpired, put the ‘prophecy’ in Jesus’ mouth to give him robust prophetic credentials. In fact, most scholars date Luke after 70 AD precisely because it makes this very prediction. In this logic, since prophesy is impossible (they assume), the only way to explain it is to set the date of authorship after 70 AD.

The conclusion of the Gentiles over Jerusalem prophesied

What seems to get missed in the authorship controversy is that Jesus continued seamlessly along and predicted that the Gentile (i.e. non-Jew) control of Jerusalem, initiated in 70 AD with its destruction, would end one day, when ‘the times of the Gentiles are fulfilled’. This is the part I have bolded. For thousands of years, one Gentile group after another swapped control of that city. But that all changed in 1967, when it was captured by the new state of Israel in the Six-Day war – and Gentiles now no longer control that city. Whatever one chooses to believe about it, whether one ‘likes’ it or not, this part of the prophecy was fulfilled – along with all its attendant issues – and certainly it was not because Luke inked it in after the fact.

Roaring and tossing of the sea prophesied

But maybe it was just a lucky guess, bound to come true eventually by chance. Jesus’ speech continues on:

25 “There will be signs in the sun, moon and stars. On the earth, nations will be in anguish and perplexity at the roaring and tossing of the sea.

Last week the nations witnessed Cyclone Pam rip through and devastate islands in the South Pacific. Consider some headlines through the lens of this prediction of the ‘roaring and tossing of the sea’ 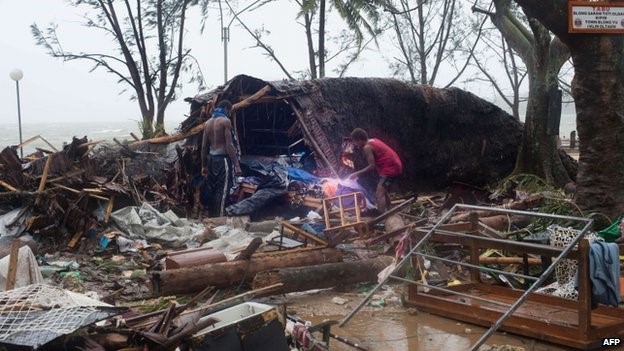 We have been hearing for a while now of the threat of sea level rise and the increased intensity of ocean storms. Cyclone Pam was just the latest exhibit in lengthening line-up of such stories we now commonly hear. Something is changing in the seas such that they now ‘roar’ and ‘toss’.

The perplexity of the nations prophesied

But Jesus was not just talking about the sea itself, but about ‘the nations’ and their perplexity of what to do about this rising problem. In a twist of irony, while his country was being devastated by Cyclone Pam, Vanuatu President Baldwin Lonsdale was in Japan attending a United Nations conference on how to understand and deal with these rising storms.  As the United Nations bulletin expressed it

Jesus’ predictions of the ‘nations’ being in ‘anguish’ and ‘perplexity’ with the problem of increasing storms on the seas was vividly illustrated for us. We may think it is obvious that ‘nations’ will convene to discuss and fret about global problems – but that certainly was not a given in the 1st Century when nations did not exist in a global community like they do today. Jesus’ words anticipated the context of nations, the endless discussions and forums amongst nations about the ‘sea’, as well as the sea itself. That starts to intrigue me.

This all happened as the Israeli elections results were agonized all the world over. This picture of Netanyahu at the Western Wall of the Temple (destroyed in 70 AD as predicted in the Speech) reminding us of Jewish re-control of that sensitive area after 2000 years, in the same week as the devastation of the ‘roaring and tossing’ of Cyclone Pam, seem almost like Someone is adding pictures to go along with the text of Jesus’ ancient speech.

But what to make of this other prediction in Jesus’ speech, that of ‘signs in the sun, moon and stars’? Frankly, it is not clear to me. The recent spectacular eclipse that made headlines around the world is actually part of a series of ‘blood’ moon events that have been coinciding with the last Jewish festivals of Passover and Sukhot for which the secular Times of Israel published an interesting article. Is there a ‘sign’ in that?  Perhaps.  Jesus concludes his speech with the following:

28 When these things begin to take place, stand up and lift up your heads, because your redemption is drawing near.”

29 He told them this parable: “Look at the fig tree and all the trees. 30 When they sprout leaves, you can see for yourselves and know that summer is near. 31 Even so, when you see these things happening, you know that the kingdom of God is near.

This was given to reassure, as a comfort. It also indicated that these events will occur progressively. Not all will be clear at once. But when they ‘begin’ we can know that the Kingdom is ‘near’.

In American baseball, only the exceptional batter ever reaches a batting average of .333. This means that he gets out twice as often as he makes first base. Yet pitchers regularly walk those batters. Why? Because they prudently recognize that 1 hit for every 3 at bats is very good and it is prudent to walk such a batter rather than risk a hit. If that is true for batters at .333 how about for the record in this Speech? Perhaps not everything is clear yet. But enough seems to be happening that at the very least it would be prudent to take it seriously – just like pitchers take a .333 batter seriously.

Jesus adds the following footnote to his Speech

34 “Be careful, or your hearts will be weighed down with carousing, drunkenness and the anxieties of life, and that day will close on you suddenly like a trap. 35 For it will come on all those who live on the face of the whole earth. 36 Be always on the watch, and pray that you may be able to escape all that is about to happen, and that you may be able to stand before the Son of Man.”

True to form, this is the part we do not like because it is a warning challenging our wills and therefore we would prefer to ignore the whole speech, hoping it will just go away. But if we are prudent we will recognize that Jesus, master teacher that he was, combined elements in his Apocalyptic speech to reach our minds, our emotions and our wills – for our good. I know that I am planning to keep ‘watch’ as I go about the life that has been given to me.