Sam Harris vs. the Valley of Dry Bones

We are now in the time of year where the stores are full of costumes of the dead, of spirits, of witches and the like. Yes, Halloween is coming and for many it’s the time to have cheeky fun at parties with role-plays or costumes of skeletons coming to life, or dead bodies walking around, all in good fun. Michael Jackson’s Thriller will be played, watched and danced to around the globe, because it’s perfect for Halloween.

But long before Thriller was conceived, and even long before Halloween itself was celebrated, an eccentric man penned some vivid images that fit perfectly for Halloween of today. One can’t help but wonder if Michael Jackson had not read these lines as he  choreographed Thriller – yet they were written about 2500 years ago!

The Valley of Dry Bones (with skeletons and corpses too)

This eccentric man was given a tour in a valley ‘filled with bones’. Read how he described it:

… the bones covered the valley floor. They were scattered everywhere across the ground and were completely dried out. … Suddenly as I spoke, there was a rattling noise all across the valley. The bones of each body came together and attached themselves as complete skeletons. Then as I watched, muscles and flesh formed over the bones. Then skin formed to cover their bodies, but they still had no breath in them…. Then he said … “Come, O breath, from the four winds” … They all came to life and stood up on their feet—a great army.

A man whisked away to a valley full of bones which start to rattle and hum as they join together forming skeletons … and then dead flesh and skin starts to envelope the lifeless skeletons so that they become corpses. Then the wind blows wildly from all directions and the bodies all come to life and they stand up to become a great army.

This sounds like a script from a horror movie ready to open up at Halloween!

But the man who wrote this script was not interested in sending shivers down our spines. He was engaged in something much more serious. He claimed that this script was a message from God Himself. And remarkably, the events of history have played out such that this message was meant for us who are living today! How so?

The man in question is Ezekiel who lived ca. 550 BC and along with this vision (from Ezekiel 37 – read complete chapter here) he explicitly provided its meaning. He wrote:

Then [God] said to me, “… these bones represent the people of Israel. … I will open your graves of exile and cause you to rise again. Then I will bring you back to the land of Israel…. Then you will know that I, the LORD, have spoken, and I have done what I said. Yes, the LORD has spoken!’”

… I will gather the people of Israel from among the nations. I will bring them home to their own land from the places where they have been scattered. I will unify them into one nation on the mountains of Israel. One king will rule them all; no longer will they be divided into two nations or into two kingdoms. They will never again pollute themselves with their idols and vile images and rebellion, for I will save them from their sinful backsliding. I will cleanse them. Then they will truly be my people, and I will be their God. (Ezekiel 37:11-23)

In other words these bones that Ezekiel saw in a vision 2500 years ago represented the Jewish people. This is not my interpretation – Ezekiel explicitly said so himself. When Ezekiel wrote these words the Jews had previously been divided into two political nations but had now gone into exile to Babylon as a conquered and ruined people. Just as every bone, by definition, has previously been a living organ in a living body, but is now ‘dead’, the Jews of that day saw themselves as formerly alive but now ‘dead bones’. Then Ezekiel had this vision of their eventual return to life. The Jews in his day did return from the Babylonian exile a few decades after his vision, but he was not writing of that since it was a return only from Babylon, and they returned only as a province dominated within a vast Empire. They did not come alive as a nation.

The Return of the Jews

In his vision Ezekiel foresaw a return from the ‘nations’ and ‘places where they had been scattered’ back to that same land that they had been ejected from, where they would be ‘one nation’ with their own ‘king’ or ruler. That did not happen until thousands of years later when the modern state of Israel was forged from a United Nations resolution in 1948. Only then did the Jews finally get a self-governing nation with their own ruler. In the intervening decades Jews have literally been returning (which they call aliyah) from ‘nations’ all over the world where they have lived since being sent into their second exile beginning when the Romans conquered Jerusalem in 70 AD. Since 1948 more than 3 million Jews from over 90 countries (which is almost half of all the countries in the world) have arrived in Israel. For a nation of 7 million people, having 40% of the population immigrate from almost half the countries of our globe in the span of 65 years, after an exile of 1900 years, is nothing short of remarkable. What is even more remarkable is that Ezekiel ‘saw’ it in his vision 2500 years ago.

The Return – in context of Jewish History

The timeline below showing the last 3500 years of Jewish history illustrates this. Starting from the time of Moses the Jews have alternated between three different national dispensations indicated by the different color coding. 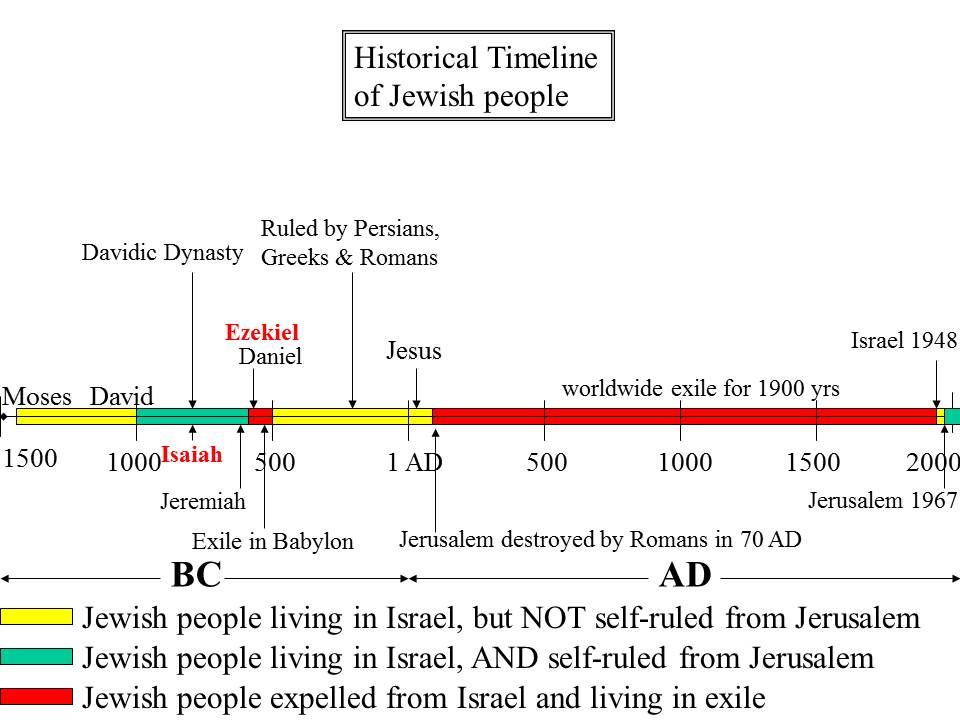 In the yellow periods, the Jews lived in the land promised to Abraham, but were not self-ruled from Jerusalem, their traditional capital. The first yellow period, that of the Judges, saw the Jewish people live independent from foreign powers, but without centralized rule, and with no Jerusalem.

This was followed by the green period, the golden age of Jewish history, where the dynasty of kings descending from David ruled from Jerusalem. But this ended in disaster when the Babylonians destroyed Jerusalem and forced the Jews into exile in Babylon – the first red period. This is the time that Ezekiel lived (as well as Jeremiah and Daniel), and the time when the Jewish people saw themselves as ‘dead bones’. Though they did return after a 70 year exile, they were not self-ruled from an independent Jerusalem. Rather they were provinces dominated within the successive Persian, Greek and Roman Empires. They were back to ‘yellow’.

This continued for over 500 years and ended when the Jews revolted against Roman rule but lost the revolt. Jerusalem was once again burned and destroyed, and the Romans this time exiled the survivors across the many nations in the larger Roman world. They were back to ‘red’ and they lived this way for almost 1900 years.

‘Dead Bones’ Coming Alive in Front of our Eyes

Until our day! With the re-birth in 1948 the dead bones started to rattle together into skeletons. With the subsequent gain of Jerusalem in 1967 as their capital, flesh and skin started to envelope the skeletons. And now every year thousands of Jews are returning from all the nations around the world. They are returning and making deserts bloom into lush farmland; they are returning and rebuilding ruined cities; they are learning Hebrew their ancient tongue; and more and more are considering again their ancient God revealed in the Hebrew Old Testament as Elohim and as YHWH. We can see the dead zombie coming back to life in front of our eyes, in the stages envisioned by Ezekiel those thousands of years ago.  And just like Ezekiel described, it is happening with all the confusion, splitting and dividing between peoples, like the violence caused by the rushing of the ‘four winds’ of the compass.  If you doubt me, just listen to the world news.

Isaiah predicts the Jewish renaissance too

It was not just Ezekiel who predicted this. Another Old Testament prophet, Isaiah, about two hundred years before Ezekiel saw that same day when (as he put it):

In that day the Lord will reach out his hand a second time to bring back the remnant of his people— those who remain in Assyria and northern Egypt; in southern Egypt, Ethiopia, and Elam; in Babylonia, Hamath, and all the distant coastlands.

He will raise a flag among the nations and assemble the exiles of Israel. He will gather the scattered people of Judah from the ends of the earth. (Isaiah 11:12-13)

Notice how Isaiah (see where he sits on the timeline) saw past the first time the remnant of exiles came back (the end of the first short red period) and predicted specifically of a second time when the remnants would be regathered “from the end of the earth”.  He saw the end of the second ‘red’ period – the very period in which you and I are now living and can see unfolding with our own eyes.

So how did Ezekiel and Isaiah foresee this so spot on? How did Isaiah even know there was going to be a ‘second’ regathering? How could they foreknow that the Jewish people would survive as a distinct people group while living as exiles in these nations around the world? After all, I see here in Canada how the many immigrants lose their ethnic and language identity after only about three generations. The Jews kept theirs for millennia. Against those odds, the promise of an enduring people which was given to Abraham should long ago have been snuffed out.

Perhaps it really is true that this Elohim or YHWH, who, according to Ezekiel, gave this vision of dry bones, really is there, watching, working, and willing that things will unfold as He promised, even as it seems so impossible. The thought that that Spirit may really be working in our midst in just this way is almost spooky.

But some of those who have reflected on this are unconvinced. Prominent among them is Sam Harris. Here is how he phrases his objection:

“But just imagine how breathtakingly specific a work of prophecy would be, if it were actually the product of omniscience. If the Bible were such a book, it would make perfectly accurate predictions about human events. You would expect it to contain a passage such as ‘In the latter half of the 20th century, humankind will develop a globally linked system of computers-the principles of which I set forth in Leviticus-and this system shall be called the internet” The Bible contains nothing like this. In fact, it does not contain a single sentence that could not have been written by a man or woman living in the first century. This should trouble you.” Sam Harris, Letter to a Christian Nation. p.60

Harris derides the prophetic foretelling in the Bible as being merely coincidental. In his view, if you ‘predict’ something vague enough (regathering of Jews to Abraham’s Promised Land), eventually it will happen. He would be impressed if Ezekiel had predicted by timing it in the 20th century and linked that prediction back to Leviticus. That would be a Sign of Real Omniscience!

Unfortunately for Harris, he has not done his homework. Because Ezekiel, in another really bizarre setting, does make a timing prediction – to the 20th century – and, almost as if there is some Divine humor in addressing Harris’s taunt, links it back to … you guessed it – Leviticus. How? What kind of timing? We pick it up in a later post, and when you see it, it’ll send a shiver down your spine better than any scary Halloween spectacle can.