In my Part 1 post I asked the question if it is really possible to ‘modify a machine while it is running’ like the evolution story maintains and also requires for it to be even plausible.  I used the troubled upgrade and shutdown of considerthegospel.org to raise the question.

To continue along this line, think for a minute about the well-known tale of the evolution of the long giraffe neck – a rather trivial ‘modification’ when compared others that must have occurred if this story is true.  The popularized idea is that in times of drought the giraffe ‘ancestors’ (something like a horse) with longer necks could reach leaves higher up in trees, and with this selective pressure, over numerous generations successive giraffes developed longer and longer necks.  The  image below illustrates this account. 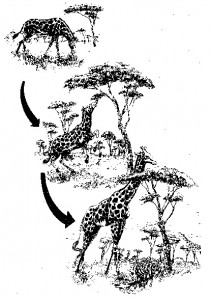 This illustrates the standard ‘story’ of giraffe evolution whereby with selective pressure the longer necks were more adaptable in times of drought.

It seemed so intuitively obvious that it has become a persuasive icon for the evolution story in the popular culture.  But look again at this story with some scientific skepticism.  The long neck and limbs of the giraffe must work in conjunction with the circulatory system that brings blood to the head.  Because the head is about 2 meters above the heart, the blood pressure produced by the heart is about 2x that of a mammal of comparable weight.  That is just a matter of the physics of fluids.  But if the blood pressure is to be that high then the artery walls must also be stronger or the giraffe will die of internal bleeding.   The neck length, heart pressure and arterial wall strength must all be balanced.  But now think for a moment what happens to the giraffe when he suddenly drops his head to the ground to drink.  Instantaneously the head goes from 2m above the heart to about 2m below the heart.  And now the extra blood pressure of the heart is a liability because the increased pressure in its head would blow its brains out.  The reason that this does not happen is that the giraffe has a special organ in his head, unique to giraffes, called the rete mirabile, that regulates the surge in blood pressure.  Without that organ all the other component adjustments of heart and veins would be useless – it would die every time it lowered its head to drink.
And then when the giraffe raises his head again after his drink it should faint from the blood loss from the brain.  When we stand up suddenly we can sometimes feel dizzy.  This is because as we stand up the blood drains from the brain.  Consider the blood drain on the brain when the head goes rapidly through a 4m elevation change.  What keeps giraffes from regularly fainting after they drink is that they have a unique set of one-way valves that regulates blood drain from the brain.  Without these valves, having all of the rete mirabile, the stronger heart, and the stronger vein walls would all be useless because the giraffe would still regularly faint after his drink. 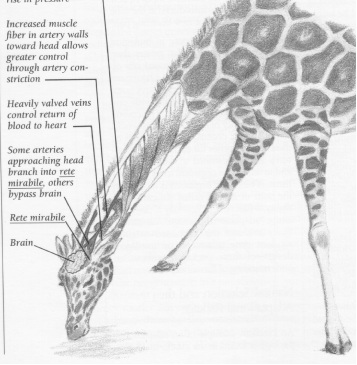 The interrelated system of features, organs and modifications that are required just for the giraffe to do a simple thing like take a drink.
From Davis & Kenyon. Of Pandas and People. 1993 p.70

These structures are illustrated in this diagram.  When actually looking ‘under the hood’ at what is required even for a relatively simple modification like the elongation of a neck the evolutionary story rapidly goes from an obvious icon to one that raises lots of questions.  The problem is that very few have bothered to look under the hood.  They preferred a sure-sell story.

The late Stephen J Gould, well-known Harvard paleontologist had this to say about the giraffe neck story in an article in Natural History. (The Tallest Tale, Natural History v105 p18-23+, 196)

I made a survey of all major high-school textbooks in biology. Every single one — no exceptions — began its chapter on evolution by first discussing Lamarck’s theory of the inheritance of acquired characteristics, and then presenting Darwin’s theory of natural selection as a preferable alternative. All texts then use the same example to illustrate Darwinian superiority — the giraffe’s neck.

In the realm of giraffes, current use of maximal mammalian height for browsing leaves does not prove that the neck evolved for such a function…Why then have we been bamboozled into accepting the usual tale without questioning?

Darwinian evolution may be both true and powerful, but if we continue to illustrate our conviction with an indefensible, unsupported, entirely speculative, and basically rather silly story, then we are clothing a thing of beauty in rags—and we should be ashamed,

So it turns out that the giraffe account, when finally analyzed has turned out to be nothing more than a ‘tale’ that has ‘bamboozled’ us and is ‘indefensible, unsupported, entirely speculative and basically rather silly’ – and this from a world’s leading scientific supporter of evolution.  Thus, when the cold light of reality shines on this story that it really turns out to be nothing more than a propaganda piece – meant to bamboozle us.  That should make us step back and ask some larger, more fundamental questions.

How do irreducibly complex systems evolve slowly and gradually when all the component parts need to be there from the beginning for the system to work at all?  Think now beyond the giraffe neck to the supposed evolution of the fish to amphibian/reptile and then to mammal.  This would have required the two-chambered heart of the fish becoming three in the amphibian and the circulation of the blood change from heart->gills/lungs -> body to a dual cycle of heart-> lungs -> heart -> body.  And then on to four chambered hearts in mammals. How does the heart ‘work’ while it is in-between chambers?  When the circulation system has left the single cycle of the fish but not yet arrived at the double cycle – how does the transitional organism (never found in the fossil record mind you) even survive?  Think about how when we want to ‘just’ adjust valves on our hearts we get the best-trained surgeons, shut the heart down and thus bypass the heart.  With the best of our intelligence we can’t modify the machine ‘while it is running’.  If we can’t make minor adjustments to valves without shutting the machine down and bypassing it how would random chance do any better in changing complete circulation paths and developing heart chambers?  How does something live in the ‘middle’?

These examples highlight a fatal problem with the Darwinian story.  Darwin himself stated the seriousness of it:

“If it could be demonstrated that any complex organism existed which could not possibly have been formed by numerous, successive, slight modifications, my theory would absolutely break down”
C. Darwin Origin of Species 6th ed. 1988 p. 154

Yet instead of honestly and directly addressing these challenges textbooks take the approach of developing scenarios in story form.  As my university invertebrate textbook describes the process:

Almost any kind of scenario can be concocted to explain how one group of organisms might have arisen from another.  … narratives are often based on a priori assumptions about hypothetical ancestors. … virtually any complicated evolutionary transition can be described on paper, given enough imagination …
Richard C. Brusca & Gary J. Brusca. Invertebrates   1990. p880

…any number of evolutionary pathways can be .. made to appear convincing on paper by imagining .. hypothetical ancestors or intermediates, but one must always ask whether these hypothetical creatures would have worked?” (ibid. p. 120)

That makes good scientific sense!  Let us ask whether these hypothetical creatures ‘would have worked’!  When we do that, when we observe how interconnected systems need all the components in order to function at all, when we recognize that for all machines and systems (like my website) non-trivial modifications require that the machine be shut off until are the components properly integrated then we can see the difficulty of the Darwinian claim.

But it seems like the whole educational and academic enterprise rather prefers to push misleading ‘stories’ in the name of science.  When one sees how stories are ‘concocted’ with ‘imagination’ to ‘bamboozle’ us we may want to ask – Does the emperor really have any clothes?

Maybe it is worth a more thorough investigation.  Perhaps a good place to start is a university debate I participated in (link here), and a critique of human evolution I did in a university anthropology class (link here)