Abraham is one of the most foundational characters of the Old Testament in helping us to understand the Gospel. He lived 4000 years ago traveling from what is modern-day Iraq to live as a wanderer in what is modern-day Israel. We saw in the Session on External Evidence that cities and names from his era are referenced in ancient tablets preserved for us today. So the setting of his account is entirely historical. There is no evidence from archaeology to dismiss his account and there is rather good reason to take this account seriously.

So I would like to look at a well-known part of the account of Abraham, the part where God asked him to sacrifice his one and only son, Isaac, for whom Abraham had waited many years, and on whom all his hopes for his future progeny rested.  This story is also known as the binding of Isaac.

So Abraham encounters his greatest test and it gives us a ‘peek’ into the Gospel.  I encourage you to read the full account in Genesis concerning the test of the sacrifice of his son here.

The sacrifice looking to the future

We can see from the account that this was a test for Abraham, yet it is also for us.  But to ‘see’ this we need to note a few observations from the account.  Here is the pertinent portion of the account:

Abraham looked up and there in a thicket he saw a ram caught by its horns. He went over and took the ram and sacrificed it as a burnt offering instead of his son. So Abraham called that place ‘The LORD Will Provide’. And to this day it is said, “On the mountain of the LORD it will be provided.” (Genesis 22:13-14)

Notice the name that Abraham gave to that place where the test occurred. He named it ‘The LORD will provide’. The question we need to ask is: ‘Is that name in the past tense, present tense or future tense?’ It is clearly in the future tense. And to be even more clear the comment which follows (which Moses inserted when he compiled this account into the Jewish Torah about 500 years later) repeats “…it will be provided”. Again this is in the future tense and thus looking to the future.  But this naming occurs after the sacrifice of the ram (a male sheep) in place of Isaac. Many who read the account think that Abraham, when naming that place, is referring to the ram caught in the thicket and sacrificed in place of his son. But when Abraham names the place the ram is already dead, sacrificed and burnt. If Abraham is thinking of the ram – already dead, sacrificed and burnt – he would have named it ‘The LORD has provided’, i.e. in the past tense. And Moses, if he was thinking of the ram that took the place of Abraham’s son would have commented ‘And to this day it is said “On the mountain of the LORD it was provided”’. But both Abraham and Moses clearly give it a name in future tense and therefore are not thinking of that already dead and sacrificed ram.

Where the sacrifice happened

So what are they thinking about then? If we look for a clue we see that the place where God told Abraham to go at the beginning of this Sign was:

Then God said, “Take your son, your only son, Isaac, whom you love, and go to the region of Moriah. Sacrifice him there as a burnt offering on one of the mountains I will tell you about.” (v.2)

This happened in ‘Moriah’. But where is that? Though it was a wilderness area in Abraham’s day (2000 BC), a thousand years later (1000 BC) King David established the city of Jerusalem there, and his son Solomon built the First Jewish Temple there. We read later in the Old Testament historical books that:

Then Solomon began to build the temple of the LORD in Jerusalem on Mount Moriah, where the LORD had appeared to his father David (2 Chronicles 3:1)

In other words, ‘Mount Moriah’ in the time of Abraham was an isolated mountain top in the wilderness but 1000 years later through David and Solomon it became the central and capital city of the Israelites where they built the Jewish Temple. And to this very day it is a holy place for the Jewish people.

Jesus and the Sacrifice of Abraham

And here we find a direct connection to Jesus and the Gospel. We see this connection when we consider one of the titles attributed to Jesus.  Now Jesus had many titles associated with him.  In the previous post I looked at the interplay of titles ‘Son of Man’ and ‘Son of God’ used at his trial.  And perhaps the most well-known title of his is ‘Christ’. But there is another title given to him that is not as well known, but hugely important. We see this in the Gospel of John when John the Baptist says:

The next day John (i.e. John the Baptist) saw Jesus (i.e. Jesus) coming toward him and said, “Look, the Lamb of God, who takes away the sin of the world. This is the one I meant when I said ‘A man who comes after me has surpassed me because he was before me’”. (John 1:29-30)

In other words, Jesus was also known as ‘The Lamb of God”. Now consider the end of Jesus’ life. Where was he arrested and crucified? It was in Jerusalem (which as we saw is the same as ‘Mount Moriah’). It is very clearly stated during his arrest that:

When he [Pilate] learned that Jesus was under Herod’s jurisdiction he sent him to Herod, who was also in Jerusalem at the time.’ (Luke 23:7)

In other words, the arrest, trial and sentencing of Jesus happened in Jerusalem (= Mount Moriah).

Back to Abraham. Why did he name that place in the future tense ‘The LORD will provide’? How could he know that something would be ‘provided’ there in his future that would so precisely mirror the drama of the scene he enacted on Mount Moriah? Think about it – in that drama Isaac is saved from death at the last moment because a lamb dies in his place. Two thousand years later, Jesus is called ‘Lamb of God’ and is arrested and dies on the same spot!  Both Abraham and Moses claimed that it was revealed to them by God.

A Divine Mind Reveals Himself

And indeed it is as though there is a Mind that is connecting these two events separated by 2000 years of history. 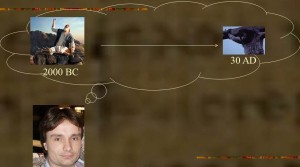 The sacrifice of Abraham was a Sign – pointing forward 2000 years – to make us think about the death of Jesus.

But what makes this unique is that the earlier event is pointing to the second event two thousand years later.  We know the earlier was configured to point to the later because the name given by Abraham and Moses was ‘The LORD will provide’ i.e. it looks to the future.  The figure illustrates how the earlier event alludes to the later one and was configured to remind us of the later event.  This is evidence that this Mind is revealing Himself to us by coordinating events though separated by thousands of years.  This is evidence that God has spoken.  Take a look here for a discussion on other possible explanations.

Good News for you and me

But this account is also pertinent to us for more personal reasons. At the end of the exchange God declares to Abraham that

“…and through your offspring all nations on earth will be blessed because you have obeyed me” (Genesis 22:18)

If you belong to one of the ‘nations on earth’ (and you do!) this has to concern you because the promise is that you then can get a ‘blessing’ from God himself!  Even only a possibility of a blessing from God should move us to investigate further.

But how is this ‘blessing’ given?  For starters, the word ‘offspring’ here is in the singular. It is not ‘offsprings’ as in many descendants or peoples, but in the singular as in a ‘he’, not through many people or a group of people as in ‘they’.   Again, this points to Jesus, the offspring of Abraham.  Just like the ram saved Isaac from death by dieing in his place, so the Lamb of God, by his death, saves us from the power of death.  The Good News of the gospel is foreshadowed beyond that of chance coincidences in the remarkable account of the sacrifice of Isaac on Mount Moriah, the same spot where 2000 years later it ‘was provided’

[Click here for this Sign explained to those with an Islamic perspective and an interest in Eid al-Adha and Ibrahim (PBUH).]

36 thoughts on “What was the Sign of Abraham’s Sacrifice?”