How was Jesus’ name prophesied long before his birth?

Sign of the Branch Part 2: The Branch named ‘Jesus’ hundreds of years beforehand

In Part 1 we saw how Isaiah started a theme using the image of The Branch. Someone coming from the fallen dynasty of David, possessing wisdom and power was predicted by Isaiah to come. Jeremiah followed on this theme by stating that this Branch would be known as the LORD (ie as in the Old Testament personal name for God) himself. 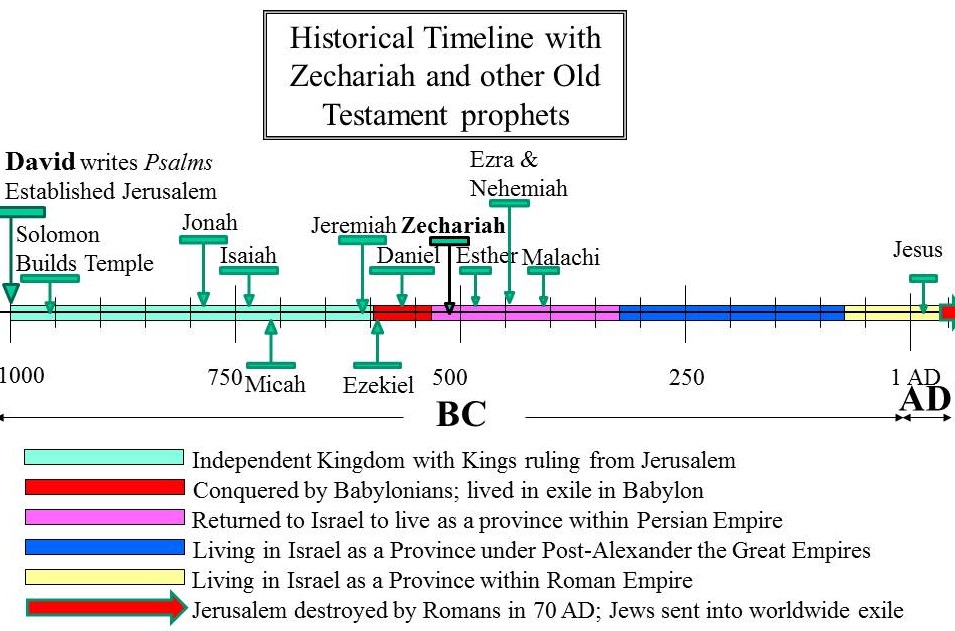 Zechariah lived 520 BC, just after the Jewish people returned to Jerusalem from their first expulsion into Babylon, but while they were being ruled by the Persians. At that time the Jewish people were working to rebuild their destroyed temple and re-institute the Mosaic religious system. Zechariah’s contemporary was a man named Joshua, who was High Priest at that time, and was working to re-start the whole priestly system. Zechariah the prophet was working in tandem with his colleague Joshua the High Priest to provide leadership for the Jewish people. Here is what the LORD – through Zechariah- in a prophetic riddle, said of this Joshua:

‘”Listen O High Priest Joshua and your associates seated before you, who are men symbolic of things to come: I am going to bring my servant the Branch. See the stone I have set in front of Joshua!” …, says the LORD Almighty, “and I will remove the sin of this land in a single day”.’ (Zechariah 3:8-9)

The Branch! Again! Building on the image started by Isaiah about 200 years before, and continued by Jeremiah 60 years earlier, Zechariah picks up this theme of ‘The Branch’. But this time the Branch is also called ‘my servant’.  In some way the High Priest Joshua in Jerusalem at 520BC, colleague of Zechariah, was symbolic of this coming Branch, but in what way? It says that in ‘a single day’ the sins will be removed by the LORD (“I will remove…”). This connects with obtaining ‘righteousness’ noted in the previous post. We will gain ‘righteousness’ by having the LORD remove our sins ‘in a single day’. How will that happen?

The Branch: Uniting Priest with King

We continue on three chapters in Zechariah and learn something astounding. To understand the following prophetic riddle, we need to know that the roles of Priest and King were strictly separated in the Old Testament. None of the Davidic Kings could be priests (some of them got into trouble by trying), and conversely, some of the priests got in trouble by dabbling in kingly intrigue. The job of the priest was to mediate between God and man by offering animal sacrifices to God for forgiveness of sins, and the job of the King was to rule with justice from the throne. Both were crucial; both were distinct. Yet Zechariah wrote that in the future:

‘The word of the LORD came to me: “…Take the silver and gold and make a crown, and set it on the head of the high priest Joshua. Tell him this is what the LORD Almighty says, ‘Here is the man whose name is the Branch, and he will branch out from his place and build the temple of the LORD… and he will be clothed with majesty and will sit and rule on his throne. And he will be a priest on his throne. And there will be harmony between the two’’ (Zechariah 6:9-13)

Once again our Branch is here. But now, against all previous precedence, the high priest in Zechariah’s day (Joshua) is to (symbolically) put on the kingly crown. Remember that in Zechariah 3 (above) Joshua was ‘symbolic of things to come’. Could it be that Joshua, the High Priest, in putting on the crown was ‘symbolic’ of a coming merger of the Kingly and Priestly roles? Into one person? And notice that Joshua, his very name, is the name of the Branch. What did that mean?

The name ‘Joshua’ IS the name ‘Jesus’

To understand this we need to review how the Old Testament was translated through history. I have written how around 250 BC the Hebrew Old Testament was translated into Greek. This translation is today still in use and is called the Septuagint (or LXX). We saw that the title ‘Christ’ was first used in this Greek translation, and that ‘Christ’=’Messiah’=’Anointed One’. (If you do not follow this please review here since this is crucial to what will follow). 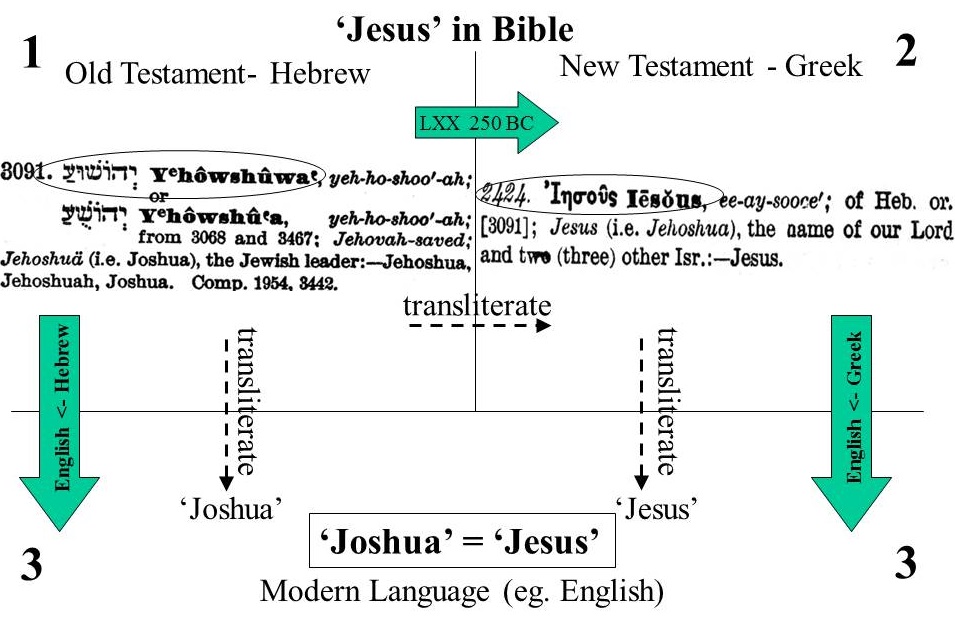 ‘Joshua’ = ‘Jesus’. Both come from the Hebrew name ‘Yhowshuwa’

Jesus of Nazareth is the Branch of Isaiah, Jeremiah & Zechariah

But now that we know this context, the prophecy of Zechariah should hit us like a bolt of lightning. Here we see a prediction, made in 520 BC, that the name of the coming Branch will be ‘Jesus’! When I saw this, I just had to sit up and take notice. This was just too ‘coincidental’ for me. Here was (and still is) a prophecy which named the coming Branch, and the name points directly to Jesus of Nazareth.

And this coming Jesus, according to Zechariah, would merge the roles of King and Priest. What was it again that the priests did? On behalf of the people they offered animal sacrifices to God for their forgiveness of sins. Just like Abraham did with his sacrifice on Mount Moriah, and Moses with the Passover lamb sacrifice, the priest covered the sins of the people through animal sacrifice. The coming ‘Jesus’ was going to perform a similar role so that the LORD could ‘remove the sin of this land in a single day’ – the day that this coming Priest Jesus would offer himself as a sacrifice, already pictured in the place of Mount Moriah and the time of year at the Passover. Sometime after fulfilling that role as Priest, this Branch Jesus would take up his throne (as per Psalm 2) and would thus be ‘a Priest on his throne’ – as stated exactly, precisely and verifiably by Zechariah about 500 years before Jesus walked this earth.

This interconnected degree of prophetic foretelling is nothing short of fantastic. Can you think of anyone else in all of history whose life was even as remotely foretold as Jesus of Nazareth’s was by the diverse Old Testament prophets? Zechariah’s naming of the Branch to be Jesus evades all the conspiracy theories of critics like Spong and Ehrman (who argue that the gospel writers made things up to fit the Old Testament) since the name of ‘Jesus’ of Nazareth is recorded outside the gospels. The Jewish Talmud, Josephus and all other writers about Jesus, both friend and foe, have always referred to him as ‘Jesus’ or ‘Christ’. I think that the only option open to us, if we do not accept this as a bona fida prophetic sign, is to ignore it and hope others do too. I have read plenty of critics like Spong and Ehrman who try to rationalize away the Old Testament prophecies in one way or another. They all just ignore this set of Branch prophecies.

Now I suppose they could rationalize that ‘Jesus’ was a reasonably common Jewish name, there certainly were other Jesus’s in Jewish history, so the name coincidence could possibly be due to chance. But let us think through the career of this Jesus of Nazareth. He certainly, as we saw, claimed to be a king; The King in fact. But everything that he accomplished while on earth was in fact priestly. The job of the priest was to take a lamb on behalf of the worshiping Jewish person, offer it to God, kill it, and the death and blood of that lamb would atone for the sin and guilt of that Jewish person. Even a superficial knowledge of the significance of the death of Jesus was that, it also, was an offering to God, on our behalf. His death atones for the sin and guilt for any willing person. The sins of the land were literally removed ‘in a single day’ – the day Jesus died. In his life he alluded to his coming role as King while fulfilling all the requirements as Priest. He has brought harmony and unity to the two roles. The Branch, the one that David long ago called the ‘Messiah’, is in fact the Priest-King.

So exploring the theme of the Branch through the Old Testament should fill us with wonder. But it does not end there. Another Old Testament writer, sandwiched between Jeremiah and Zechariah in history predicted the time of his coming. We will look at that next time.

11 thoughts on “How was Jesus’ name prophesied long before his birth?”