Was there a Noah? Testimony from ancient Hindus & modern calendars … (Part 1)

The Epic of Gilgamesh, discovered in 1853, has been the subject of a lot of comparison and speculation over the decades since its discovery.  This epic is an ancient Babylonian poem-story of a righteous man who was saved from a flood by building a huge boat.  Because it is very ancient, and because the story is remarkably similar to the Biblical flood story of Noah, many had surmised and speculated that the Biblical account was borrowed or derived from this Mesopotamian account.  After all, Babylon was a center of civilization  at 2000 BC, and the patriarch Abraham came from there when he went on his journey that birthed the Hebrew nation and their book.  Would it not therefore be plausible that the Hebrews got the Biblical deluge story from the Epic of Gilgamesh?  This reasoning has become quite common, and thus the account of Noah has been dismissed as simply a re-hashed mythical story.

But to keep the issue framed in this way is far too simplistic because the trail of flood stories does not start or end with the Epic of Gilgamesh.  Since I have an interest in the ancient Sanskrit Rg Vedas of India (which I explore more systematically in Vedic website) I thought it would be apropos to consider their flood account. It is found in the ancient sanskrit Shatapatha Brahmana which describes how all mankind today comes from Manu who survived a great judgment of a flood that came because of human corruption, and he did so by seeking refuge in a huge boat.  From this story, we get the English word ‘man’.

Ancient Manu – from whom we get the English word ‘man’

If we look into the derivation of the English word ‘man’, it comes from proto-Germanic. The Roman historian Tacitus, living just after the time of Jesus Christ, among his many compilations, wrote a book of the history of the German people. In it he writes

In their old ballads (which amongst them are the only sort of registers and history) they celebrate Tuisto, a God sprung from the earth, and Mannus his son, as the fathers and founders of the nation. To Mannus they assign three sons, after whose names so many people are called (Tacitus. Germania Ch 2, written ca 100 AD)

Etymologists tell us that this ancient Germanic word ‘Mannus’ is a derivation of the Proto-Indo-European “manuh” (cf. Sanskrit manuh, Avestan manu-,). In other words, the English word ‘Man’ probably derives from Manu whom the Vedic Shatapatha Brahmana says we all come from!  Whether you know it or not, the account of Manu in the Vedas has affected your vocabulary.  So let us look at this person and see what we can learn. We start by summarizing the account in the Shatapatha Brahmana. There are a few renditions that have slightly different aspects to the account, so I will stick to the main themes.

In the Vedic accounts Manu was a righteous man, who sought truth. Because Manu was absolutely honest, he was initially known as Satyavrata (“One with the oath of truth”).

According to the Shatapatha Brahmana (click here to read the account in Shatapatha Brahmana), an avatar warned Manu of a coming flood. The avatar appeared initially as a Shaphari (a small carp) to Manu while he washed his hands in a river. The little Fish asked Manu to save Him, and out of compassion, he put it in a water jar. It kept growing bigger and bigger, until Manu put Him in a bigger pitcher, and then deposited Him in a well. When the well also proved insufficient for the ever-growing Fish, Manu placed Him in a huge tank.  As the Fish grew further Manu had to put it in a river, and when even the river proved insufficient he placed it in the ocean, after which it nearly filled the vast expanse of the great ocean.

It was then that the avatar informed Manu of an all-destructive deluge which would be coming very soon. So Manu built a huge boat which housed his family, 9 types of seeds, and animals to repopulate the earth, for after the deluge abated the oceans and seas would recede and the world would need to be repopulated with people and animals. At the time of the deluge, Manu fastened the boat to the horn of a fish which was also an avatar. His boat ended up, after the flood, perched on the top of a mountain. He then descended from the mountain and offered sacrifices for his deliverance. All peoples on earth today descend from him through his three sons.

The Biblical flood compared with the Vedic flood.

It would seem that the convergence between these two ancient accounts is too strong to be due simply to chance.  Perhaps one account borrowed from the other?  But the account of Manu comes from South Asia, much further removed from Mesopotamia than the ancient Hebrews were, and being in Sanskrit, is in an unrelated language.  The “Bible got its flood story from the Epic of Gilgamesh” theory is much less straight-forward when you realize that there is also this ancient flood story from India to explain.

The Testimony of diverse Flood accounts – from around the world 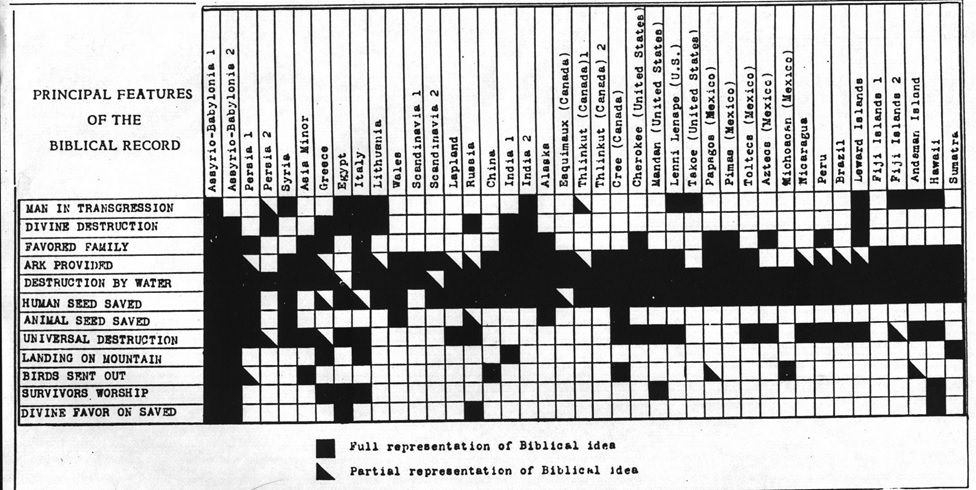 Flood accounts from cultures around the world compared to the flood account in the Bible (From Nelson, The Deluge Story in Stone)

As you can see, the issue is not to explain simply these three accounts, for they are but the tip of the iceberg.  There are flood accounts from all continents, from peoples who would never have had contact with each other, who could not have ‘gotten’ their story from the Epic of Gilgamesh.  Almost all these groups had in common the ‘memory’ that the flood was a Judgment by the Creator but that some humans were saved in a huge boat.  In other words, the memory of a universal flood is not only found in the Sanskrit Vedas, Epic of Gilgamesh and the book of Genesis in the Bible, but in other cultural histories around the world and continents apart. It is absurd to postulate that all these borrowed their story from Mesopotomia.  The accounts are too spread out around the globe for that.

The simplest and most straight-forward way to explain the complete flood account data is to suggest that this event really did happen and these accounts are memories of that ancient event.  Perhaps indeed, there really was a Noah!  Perhaps that flood did happen as well!  This would also explain why the Chinese remember the events of Genesis in their calligraphy.  But these are radical suggestions to put forward in our day.  Is there any further data that can shed some light on this question?  You don’t have to look far back to find it.  You simply need to look at some other calendars that are in use around the world today and notice something peculiar about them.  We pick that up in our next post.

3 thoughts on “Was there a Noah? Testimony from ancient Hindus & modern calendars … (Part 1)”