The Final Countdown – Embedded in the Beginning

In my last few posts I have looked at how mankind and Lucifer fell from their initial created state. I then used the story of Pinocchio that has helped me to visualize and understand what God was hoping for His creation. But hope is one thing, an executed plan is another.  Jepetto (the creator in Pinocchio) did not have a plan to redeem Pinocchio (it happened apart from him), and here the Pinocchio analogy falls short. In the Biblical account, God has a plan that He will execute. This plan has two parts: A Promise and a Curse. Here I look at the Promise and later I look at the Curse.

The Bible – Really a Library

To appreciate the significance of this Promise we must know some basic things about the Bible. Though it is a book, and we think of it as such, it is actually more accurate to think of it as a mobile library. This is because it is a collection of books, written by a diverse set of authors, over a time span that exceeds 1500 years, which today is bound up into one volume. This fact alone makes the Bible unique among the Great Books of the world. The different books of the Bible make statements, declarations and predictions that later books pick up on. If the Bible was written by just one author, or a group of authors that knew each other that should not cause us to take note. But the authors of the Bible are separated by hundreds and even thousands of years, writing in different civilizations, languages, social strata, and literary genres – yet their messages, allusions and predictions are picked up seamlessly by later authors or are fulfilled through facts of history verifiable outside the Bible. This makes the Bible unique on a whole different level – and knowing that we should take note. Existing manuscript copies of these books are dated to about 200 BC so the textual base of the Bible is better, by far, than all other ancient books of the world.

I gave a public presentation recently entitled Does God Exist? at McMaster University and will upload the whole presentation shortly. But I have included the first 10 minutes in the video clip below which covers the diversity of authors and the manuscript texts of the books in the Bible. View it to better appreciate the points I am making above.

The Gospel Promise in the Garden

We see this foreshadowing ability clearly in the Creation and Fall account right at the beginning of the book of Genesis in the Bible. In other words, though it is recounting the Beginning, it was written with the End in view.  Here we see a Promise when God confronts Satan (Lucifer) and speaks to him in a riddle:

“… and I (God) will put enmity between you (Satan) and the woman and between your offspring and hers. He will crush your head and you will strike his heel.” (Genesis 3:15)

This is a Promise in riddle form – but it is understandable. Reading carefully you will see that there are five different characters mentioned and that this is prophetic in that it is looking forward-in-time (seen by the repeated use of ‘will’ as in future tense). The characters are:

And the riddle predicts how these characters will relate to each other in the future. This is shown below 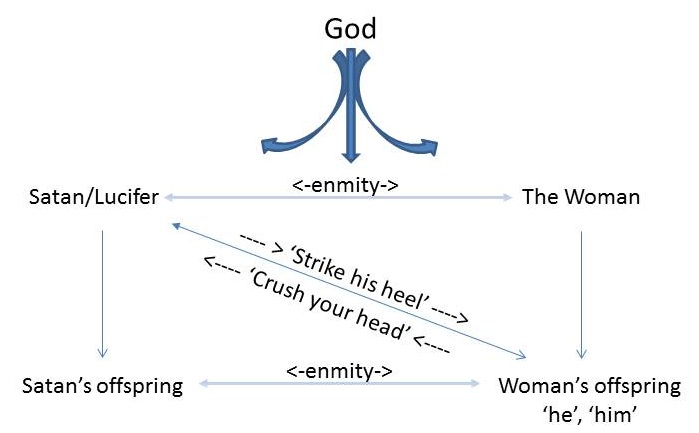 Relationships between the characters depicted in the Promise

Deductions on the Offspring – a ‘he’

So far we have just made observations directly from the text. Now for some reasoned deductions. Because the ‘offspring’ of the woman is referred to as a ‘he’ and a ‘his’ we know that it is a single male human – a man. With that we can discard some possible interpretations. As a ‘he’ the offspring is not a ‘she’ and thus cannot be a woman – but the ‘he’ comes from a woman. As a ‘he’ the offspring is not a ‘they’, which it could have plausibly been, perhaps a group of people, or a race, or a team, or a nation. At various times and in various ways people have thought that a ‘they’ would be the answer. But the offspring, being a ‘he’ is NOT a group of people whether that refers to a nation or those of a certain religion as in Jews, Christians or Muslims etc. As a ‘he’ the offspring is not an ‘it’ (the offspring is a person). This eliminates the possibility that the offspring is a particular philosophy, teaching, technology, political system, or religion. An ‘it’ of these kinds would probably have been, and still is, our preferred choice to fix the world. We think that what will fix our situation is some kind of ‘it’, so the best of human thinkers through the centuries have advocated different political systems, educational systems, technologies, religions etc. But in this Promise the compass is pointed in a totally different direction. God had something else in mind – a ‘he’. And this ‘he’ would crush the head of the serpent.

Another interesting observation comes from what is not said. God does not promise the man an offspring like he promises the woman (we will see further what He promises there in the Curse). This is quite extraordinary especially given the emphasis of sons coming through fathers throughout the Bible. In fact, one criticism of the genealogies in the Bible by modern Westerners is that they ignore the blood lines that go through women. It is ‘sexist’ in our eyes because it just considers sons of men. But in this case here it is different – there is no promise of an offspring (a ‘he’) coming from a man. It says only that there will be an offspring coming from the woman, without mentioning a man.

Out of all the humans that have ever existed that I can think of, historically or mythically, only two have never had a physical father (this includes the Greek demi-gods who were sired by ‘gods’ like Zeus being with mortal women). The first was Adam, created directly by God. The second was Jesus who (the New Testament claim goes) was born of a virgin – thus no human father. Is Jesus being foreshadowed here in this riddle? This fits with the observation that the offspring is a ‘he’, not a ‘she’, ‘they’ or ‘it’. With that perspective, if you read the riddle some pieces fall into place.

But what does it mean that the serpent would strike ‘his heel’? I could never see it until I worked in the jungles of Cameroon. We had to wear thick rubber boots even in the humid heat – because the snakes there lay in the long grass and would strike your foot – i.e. your heel – and that would kill you. My first day there I almost stepped on a snake, and could have died from it. The riddle made sense to me after that. The ‘he’ would destroy the serpent, but the price he would have to pay, would be that he would be killed.  That does foreshadow the victory achieved through the death of Jesus.

The offspring of the Serpent?

But who is his other protagonist, this offspring of Satan? Though we do not have space here to trace it out exhaustively, the later books speak of a coming person. Note the descriptions:

“… when their sin is at its height, a fierce king, a master of intrigue, will rise to power. He will become very strong, but not by his own power. He will cause a shocking amount of destruction and succeed in everything he does. He will destroy powerful leaders and devastate the holy people.  He will be a master of deception and will become arrogant; he will destroy many without warning. He will even take on the Prince of princes in battle, but he will be broken, though not by human power. (Daniel 8: 23-25; written by Daniel in Babylon ca 550 BC)

A man, with an invisible power behind him will challenge the ‘Prince of princes’ but his head too ‘will be crushed’.

Concerning the coming of our Lord Jesus Christ and our being gathered to him … Don’t let anyone deceive you in any way, for that day will not come until the rebellion occurs and the man of lawlessness is revealed, the man doomed to destruction. He will oppose and will exalt himself over everything that is called God or is worshiped, so that he sets himself up in God’s temple, proclaiming himself to be God. (2 Thessalonians 2:1-4; written by Paul in Greece ca 50 AD)

Hmm … sounds like an echo of Lucifer’s challenge at the dawn of time. The old saying, ‘the apple does not fall far from the tree’ may apply here. And the last book in the Bible, many pages and thousands of years removed from the Promise in Genesis, predicts:

The beast, which you saw, once was, now is not, and will come up out of the Abyss and go to his destruction. The inhabitants of the earth whose names have not been written in the book of life from the creation of the world will be astonished when they see the beast, because he once was, now is not, and yet will come. This calls for a mind with wisdom. (Revelation 17:8-9; written by John on an island off Turkey ca 90 AD)

These later books (again note the diversity of authors, settings and eras they were written in) more explicitly speak of a countdown to a clash between the offspring of the woman and Satan’s offspring. But it is first mentioned in embryo-like form in this Promise of Genesis, at the very beginning of Biblical History, with details waiting to be filled in. So the climax of history, the countdown to a final contest between Satan and God, started long ago in the Garden is foreseen at that same beginning – the earliest Book.  It could almost make one think that history is really His-Story.

Click here to see & hear a video presentation on this in a Christmas context.