Evidence for a Creator God through science

I was an avid science reader while in school. I read about stars and atoms – and most things in-between. Most of the books that I read, and all that I learned in school taught me that though technically considered a theory, evolution was as established as any scientific fact could be. I was taught that through evolution all life has descended over long ages from a common ancestor through the process of natural selection operating on chance mutations. Evolution was appealing to me since it made sense of so much of the world I saw and experienced around me. For example, it explained:

All that was true of human life – struggle, competition and lust; what was observable of the biological world – mutations, changing species, and similarities between species, was all explained by chance and natural selection operating on the evolving descendants of our common ancestor over millions of years.

Evolution seemed so obvious that I was impatient with any who questioned it, especially those who did so because of their ‘religion’. Even though I believed in God, I figured in some manner that science had convincingly proven evolution, and therefore God had used evolution to make the world and the people in it. Further scientific proofs of the truth of evolution consisted of transitional fossils showing how animals in the past were linked to other more evolved descendants through intermediate fossils. I had supposed that many such transitions existed, showing the sequence of our evolution down through the ages.

I was quite surprised, as I took a closer look, to discover that this was simply not the case. As a matter of fact, the lack of transitional fossils showing the textbook evolutionary path (single cell -> invertebrate -> fish -> amphibian -> reptile -> mammal -> primates -> man) directly contradicted what one would expect if evolution were true. For example, the evolution from single cell organisms to marine invertebrates (ex. like starfish, jellyfish, trilobites, clams, sea lilies etc.) supposedly took 2 billion years. You can imagine the number of intermediates that would have existed as nature by chance and natural selection evolved biological life from an amoeba-like organism to some complex animal similar to one of the invertebrates mentioned above. Countless numbers of these transitions should have existed – and some of those should have been preserved and have been found as fossils today. But what do the evolutionary experts say about these transitions?

Why should such complex organic forms [i.e., the invertebrates] be in rocks about six hundred million years old and be absent or unrecognized in the records of the preceding two billion years? (M. Kay and E.H. Colbert, Stratigraphy and Life History (1965), p. 102.)

The fossil record is of little use in providing direct evidence of the pathways of descent of the invertebrate classes. … no phylum is connected to any other via intermediate fossil types. (J. Valentine, The Evolution of Complex Animals in What Darwin Began, L.R. Godfrey, Ed., Allyn & Bacon Inc. 1985 p. 263.)

Thus, the actual evidence showed NO such evolutionary sequence culminating in the invertebrates – they just suddenly appear in the fossil record fully formed. And this supposedly involved two billion years of evolution! This same absence of intermediate fossils also occurred in the supposed evolution from invertebrates to fish (as attested by these leading evolutionists):

Between the Cambrian [invertebrates] … and when the first fossils of animals with really fishlike characters appeared, there is a gap of 100 million years which we will probably never be able to fill” (F.D. Ommanney, The Fishes (Life Nature Library, 1964, p.60))

All three subdivisions of the bony fishes appear in the fossil record at approximately the same time… How did they originate? What allowed them to diverge so widely? How did they come to have heavy armor? And why is there no trace of earlier intermediate forms? (G.T. Todd, American Zoologist 20(4):757 (1980))

When one then turns to see the fossil evidence supporting the evolution of plants, the same kind of contrary evidence is encountered:

The origin of the land plants is about as “lost in the mists of time” as anything can be, and the mystery has created a fertile arena for debate and conjecture (Price, Biological Evolution, 1996 p. 144)

This can be shown when one looks at the evolutionary ‘trees’. Take the evolution of mammals for example. You will see from this textbook figure that there is no start, or transitional fossils connecting the major groups of mammals – all appear with their characteristics complete. 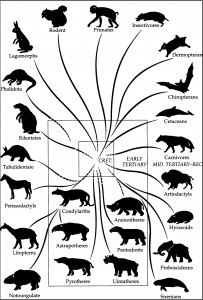 A typical evolution tree for mammals in a textbook. Note that there is no ‘real’ ancestor and no ‘real’ transitions. From: Price, Biological Evolution, 1996 p. 127

Thus I learned that even though millions of fossils have been found worldwide, not one undisputed transitional fossil has ever been found. Notice how scientists at museums of Natural History summarize the fossil record:

The American Museum people are hard to contradict when they say there are no transitional fossils…You say that I should at least ‘show a photo of the fossil from which each type of organsim was derived’. I will lay it on the line — there is not one such fossil for which one could make a watertight argument” (Colin Patterson, Senior paleontologist at the British Museum of Natural History in a letter to L.D. Sunderland as quoted in Darwin’s Enigma by L.D. Sunderland, p. 89 1984)

The fossil evidence, upon taking a closer look, seemed to suggest to me that evolution was more like a modern fable than a scientific fact. Then I started to realize that the explanatory power of evolution that I described earlier was not as impressive as I had first thought. For example, though we can see changes in animals over time, these changes never show any net effect of increasing complexity. Thus when the moth populations mentioned earlier change color, the level of complexity (gene information) remains the same. No new structures, functions or information content (in the genetic code) are introduced – just variations of existing information are selected for. Yet evolution requires change showing increase in complexity and information. After all, this is the general trend that the evolutionary ‘trees’ try to portray – simpler life (like single-celled organisms) gradually evolving to more complex life (like birds and mammals). Using the example of the changing color of the moth (or the many similar examples from artifical breeding programs) as support for evolution is like arguing that seeing something move back and forth horizontally (like billiards on a pool table) is evidence that they will eventually move up vertically (like an elevator). And we know that this is simply not so. To extrapolate change of increasing complexity from observing change at the same level of complexity is equally tenuous.  University textbook examples, like that of the evolution of the Soapberry bug, continue to show natural selection and change – but not evolution in the sense of new functional information

Homology – From a Common Designer! 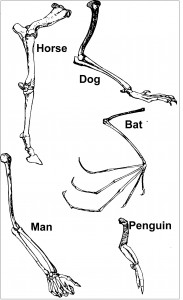 limb design similarities in mammals – From a common ancestor or a common designer? Your worldview will answer that question before this data will

Finally, it was pointed out to me that what I had thought of as similarities between organisms proving the existence of a common evolutionary ancestor (technically known as homology) could also be seen as evidence of a common creator.

I have kept on with my science readings, and I have seen that as we continue to understand more about the biological world, the problems with evolution keep increasing. For evolution to be possible, small changes in function need to increase survival rates so that these changes are selected for. The problem is that many of these transitional changes will simply not work. Take birds for example. They supposedly evolved from reptiles. Now reptiles have a lung system, like mammals, where the air is brought in-and-out of the lung to alveoli though bronchi tubes. 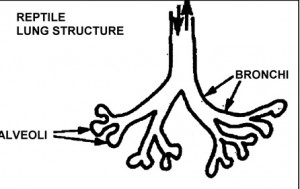 Reptile lungs: Air passes in and out, bi-directionally, through bronchi tubes

Birds however have a totally different lung structure. Air passes through the parabronchi of the lung in one direction only (kind of like how air passes through a vacuum cleaner – straight through). This is difference is illustrated in the following figures.

How is the hypothetical half-reptile and half-bird going to breathe while his lung structure is being rearranged?

Bird lungs: Air passes in and straight through uni-directionally

In other words, is it possible for a lung to work at all if it is part-way between the bi-directional structure of reptiles and the uni-directional structure of birds? Not only is being half-way between these two lung designs NOT better for survival, but the intermediate animal would not be able to breathe – he would die in minutes. Maybe that is why no transitional fossils have ever been found –because it is simply impossible to function (and thus live) with a partially developed design theme.  Even the supposed evolution of such a simple thing as the elongated neck of the giraffe, cannot be explained by the small successive steps of natural selection.

Is evolution a proven fact? Or is it a modern fable? There is vanishingly small evidence to support the theory of evolution, and it is inconsistent with a surprising amount of the evidence and even common-sense. I hope that this page will encourage you to start taking a closer look about this because how you and I understand our origins will have an impact on how we see our world and ourselves. We will either see ourselves and the people around us as products of chance, only here on earth due to a long series of lucky ‘mistakes’, or we will see ourselves, and people around us as created by a Designer. And this is a Designer who has showed some amazing craftsmanship – including the design of you and I. Call him God, or perhaps something else, this awareness will be an important first step in determining our sense of meaning, purpose and self-worth as we live out our lives. It provides a basis to understand ourselves, the world around us, and our creator.  And if He has created us, perhaps He has also revealed a message to us. Why not investigate and find out?

So on this site are other posts, pages and videos that go much more in-depth on this issue than this little article can.   Here are some pertinent pages:

University debate with an evolution professor

Human Evolution? – video of a presentation I did in a university anthropology class

Consider Design? – video of an overview of the Case for Design

Neanderthals in your bloodline

I hope you will be motivated to take a closer look into this issue – it has been a fascinating one for me.

17 thoughts on “Evolution: Fact or Fable?”