The largest gathering ever in human history officially started this week – the Hindu Kumbh Mela festival which is celebrated only once every 12 years. Organizers expect a staggering 100 million people to descend on the city of Allahabad by the shores of the Ganges River in India through the 55 day festival season, with 10 million having bathed in the Ganges just on the opening day alone. Organizers expect 20 million bathers on the peak bathing day of February 15, according to NDTV. I have been to Allahabad and I can tell you it is a dusty place, with a small-ish town feel because of limited infrastructure. I cannot imagine how these many millions can be there at once without all functions seizing up.  The BBC reports huge efforts being made to bring things like toilets and doctors to meet the day-to-day needs of these people. These Khumb Mela numbers dwarf that of the annual Hajj pilgrimages to Mecca that Muslims make – a ‘mere’ 3.1 million in 2012. 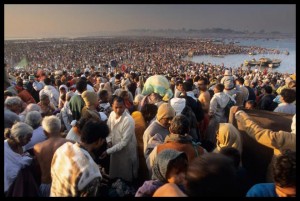 Millions of devotees at Ganges for Kumbh Mela

So why will 100 million people spend 120 billion rupees ($2.2 billion dollars) to bathe in the Ganges river, one that has high levels of pollution (When I was there it certainly did not look appealing to jump into)?  One devotee from Nepal reported to the BBC that

“I have washed off my sins”.

“I wash away all my sins, from this life and before,” said wandering ascetic Swami Shankranand Saraswati, 77, shivering naked in the cold.

NDTV tells us that

Worshippers, who believe a dip in the holy waters cleanses them of their sins,

In the previous 2001 festival I noticed on the then-BBC interview that pilgrim Mohan Sharma reported that “the sins we have created are washed away here”.

The universal human sense of ‘sin’

In other words, these multiple millions of Hindus will spend money, travel on crowded trains, endure congested situations and bathe in a river that, from a purely ecological rather than spiritual perspective, is very dirty – in order to have their sins ‘washed away’. Many westerners will miss the significance of this in their quick dismissal of such a ‘superstitious’ idea. Because it is not their solution that should draw our attention, but the fact of the problem that these devotees are trying to solve – their sins.

… does not originate with the Bible

Many people I talk to do not like the Gospel because they think that it is the Gospel that is their foremost accuser of sin.  No one likes being told they are a ‘sinner’ – it is something that makes us uncomfortable and guilty.  Many think that it is the Gospel (and Bible) that is the source for this and they think that if they dismiss the Bible then they can get rid of the idea of ‘sin’.  It is true that the Bible declares that we are sinners, which can be seen as missing the mark in a marksmanship metaphor, or as a corruption of our nature as in an orcs of middle-earth metaphor. But the Bible itself clearly says that it is not the source of this accusation. It says

Indeed, when Gentiles, who do not have the law, do by nature things required by the law, they are a law for themselves, even though they do not have the law. They show that the requirements of the law are written on their hearts, their consciences also bearing witness, and their thoughts sometimes accusing them and at other times even defending them. (Romans 2:14-15)

And it is festivals like the Kumbh Mela where multiple tens of millions of Hindus, who have never read the Bible, but are trying to grapple and make peace with their ‘sin’ that should alert us to the truth of this Biblical statement.  The ‘bad news’ of the reality of our sin is shown in the Kumbh Mela Festival. You cannot wish your sins away by ignoring the Gospel, because it is not the Gospel that is first accusing you – it is yourself.

Hindu understanding of ‘Right’ and ‘Wrong’

You may think that perhaps these Hindus have a very different idea of what ‘sin’ is compared to what non-Hindu westerners have. Here are some moral teachings from a Hindu guru, Sai Baba, whose books I have read. Ask yourself as you read them “Is what he says is ‘good’ and ‘right’ really ‘good’ and ‘right’ according to my moral compass”?

“And what is dharma (Our moral duty)? Practicing what you preach, doing as you say it has to be done, keeping precept and practice in line. Earn virtuously, yearn piously; live in fear of God, live for reaching God: that is dharma”  Sathya Sai Speaks 4, p. 339

“What exactly is your duty?…

“Whoever subdues his egoism, conquers his selfish desires, destroys his bestial feelings and impulses, and gives up the natural tendency to regard the body as self, he is surely on the path of dharma” Dharma Vahini, p.4

As I read these I find that I cannot argue with Sai Baba. I agree with him that these are good precepts to live by. But when I turn from judging these precepts to having them judge me I recognize that I am not measuring up. And thus, like these millions of Hindus who have never read the Bible, I am conscious of falling short of this standard.  It is just like the Bible says

all have sinned and fall short of the glory of God (Romans 3:23)

When you become aware of ubiquity of our moral compass (what I called the Tao in previous posts) you can find it in more and more seemingly unlikely places. For example, Christopher Hitchens, in attacking the Ten Commandments, in a back-handed way agrees with both the universality of our moral conscience as well as our inability to live it (i.e. our sin). After discussing the first of the Ten Commandments he writes:

“…Only then comes the four famous ‘shalt nots’ which flatly prohibit killing, adultery, theft, and false witness. Finally there is a ban on covetousness, forbidding the desire for ‘thy neighbours’… chattel. … No society ever discovered has failed to protect itself from self-evident crimes like those supposedly stipulated at Mount Sinai. Finally, instead of the condemnation of evil actions, there is an oddly phrased condemnation of impure thoughts…. More important, it demands the impossible: a recurrent problem with all religious edicts. One may be forcibly restrained from wicked actions…, but to forbid people from contemplating them is too much…. If god really wanted people to be free of such thoughts, he should have taken more care to invent a different species”   Christopher Hitchens.  2007.  God is not great: How religion poisons everything.  P.99-100

Here he tells us two important things. First he agrees that every society ‘ever discovered’ had similar moral teachings as the Ten Commandments. They are universal and ‘self-evident’ as he says, thus showing that they do not get their authority because of the Bible.  Hitchens mistakenly thinks that the Bible is making the claim to a distinct moral authority that is unique from other morals, and is simply grounded in itself.  When he finds similar moral laws everywhere else he then thinks he has dismissed or disproved the Biblical claim.  That Categorically Imperative moral authority comes from something deeper than the Bible – it comes from within ourselves – and it will not go away simply by evading Biblical authority.

Second, Hitchens takes particular issue with the Tenth Commandment against coveting, but the principle applies as he notes to ‘all religious edicts’ – we simply cannot actually live them. He falls short – just like the Bible says. These are two fundamental observations that we can make about our Morals and our behaviour.

When it comes to our sin the Bible is simply a Messenger, trying to make us see the reality of our situation. And as such, its message can fall like ‘bad news’ on our ears. Hitchens responded to this by choosing to shoot the Messenger. The devotees at the Kumbh Mela festival are choosing to respond to the Bad News of their sin through bathing and ascetic sacrifice – without ever knowing if their efforts will be sufficient. But the irony is that the Good News of the Gospel is exactly what Hitchens mockingly cried for. The Good News of the Gospel is precisely God taking the initiative – to use Hitchens words – ‘to invent a different species’, by – to use Kumbh Mela devotee words – ‘washing our sins away’.  The effect of that washing is to transform sin-infested ‘Pinochios’ into real children of God – a different species.  Followers of the Gospel can then rest in the sufficiency of God’s work of ‘washing our sins away’.  The words of Hitchens and the efforts of the devotees show this message of the Gospel is Good News indeed, in the wider backdrop of the bad news of our sin.