Where does the ‘Christ’ in Jesus Christ come from?

I sometimes ask people what they think Jesus’ last name was. Usually they reply along the lines of, “I guess his last name was ‘Christ’ but I am not sure”. Then I ask, “If that was the case then when Jesus was a little boy did Joseph Christ and Mary Christ take little Jesus Christ to the market?” Put that way, they realize that ‘Christ’ is not Jesus’ last name. So, what is ‘Christ’? Where does it come from? What does it mean? Since we are now in the Christmas season, I hope to sharpen your Christmas experience and embark on some 1st century controversies about Jesus – namely, was he ‘the Christ’?

We do need to first understand some very basic principles of translation. Translators try to capture the best meaning. Thus a word-for-word approach is not always used. For example, in my native Swedish if I was to ask about the time I would say “Hur mycket är klockan?” which translated word-for-word is “How much is the clock?” But we do not speak that way in English so translating that phrase by meaning rather than by literal words is preferred.  But translators sometimes choose to translate by similar sound rather than by meaning, especially when it comes to names or titles. This is known as transliteration. For example, our English name Peter is a transliteration from the Greek name Petros, which means ‘rock’ in Greek. The name was rendered to English by similar sound rather than by meaning. However, the same name in French is Pierre, which means ‘rock’ in French. So the name was rendered into French from Greek by translation (similar meaning) rather than by transliteration (similar sound). For the Bible, translators had to decide whether words (especially names and titles) would be better in the receiver language through translation (by meaning) or through transliteration (by sound). 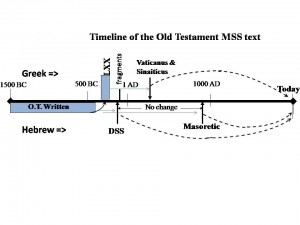 Old Testament manuscript timeline: Septuagint (or LXX) was translated from Hebrew ca 250 BC

Now let’s layer these principles onto the history of Biblical translation. The first translation of the Bible was when the Hebrew Old Testament was translated into Greek about 250BC. This translation is known as the Septuagint (or LXX) and it has exerted an enormous influence. I described the LXX in posts I and II on the Septuagint, and I encourage you to read them because they will help you better follow me from here.

Translation & Transliteration in the Septuagint

The figure below shows how all this impacts modern-day Bibles where translation stages are shown in quadrants. 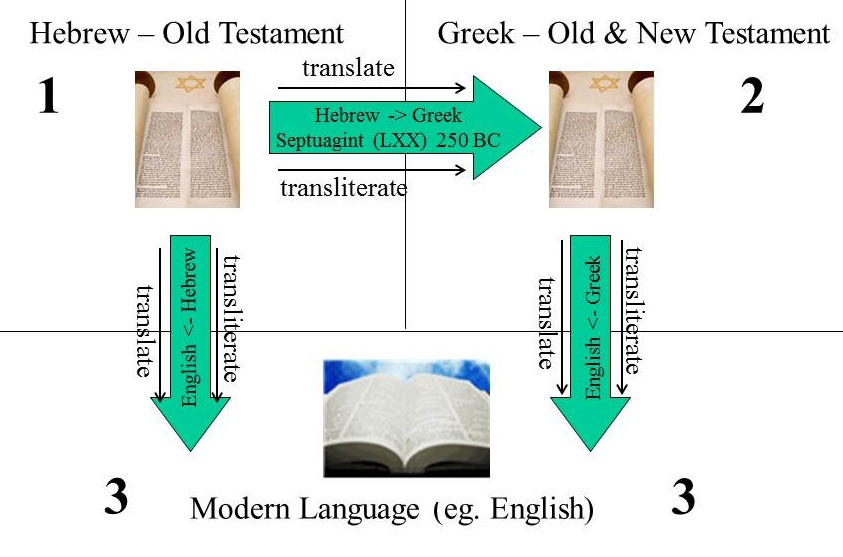 This shows the translation flow from original to modern-day Bible

The original Hebrew Old Testament is in quadrant #1 and is accessible today in the Masoretic text and the Dead Sea Scrolls. The Greek New Testament is in quadrant #2. But because the Septuagint was a Hebrew –> Greek translation it is shown as an arrow going from quadrant #1 to #2 so that #2 contains both Old and New Testaments. In the bottom half (#3) is a modern language, like English, that the Bible is translated into. The translators had to decide whether words were better in the receiver language through transliteration or translation as explained above. This is illustrated with the green arrows labeled transliterate and translate on either side of them, showing that the translators could take either approach. Taken together, this figure shows the process of how the Biblical texts have gone from Hebrew and Greek to modern languages of today.

The Origin of ‘Christ’

In the next figure I again follow the process as above, but this time I am specifically focusing on the word ‘Christ’ that appears in our modern-day New Testaments. 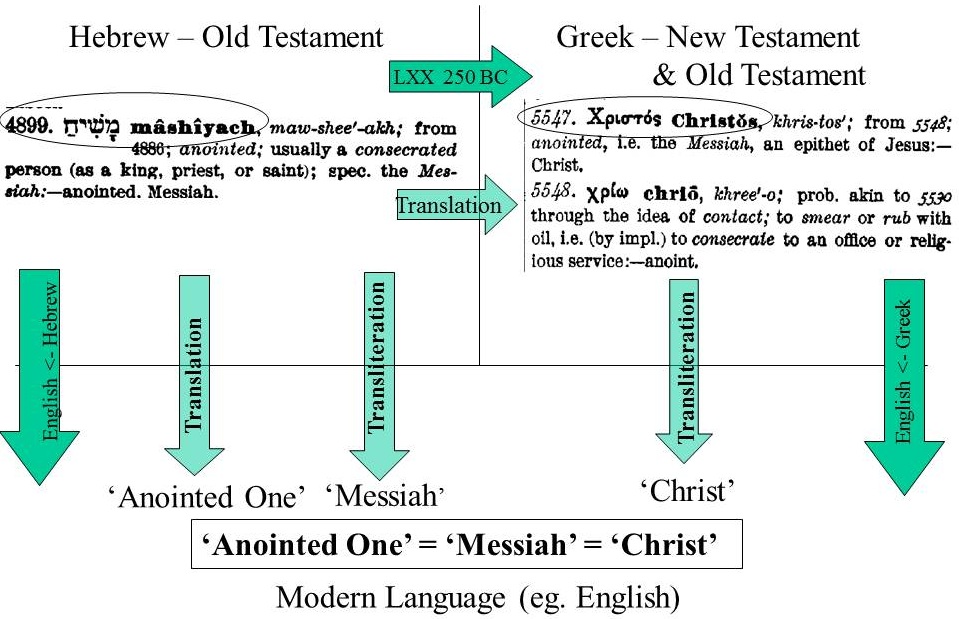 Where does ‘Christ’ come from in the Bible

We can see that in the original Hebrew Old Testament the term was ‘mashiyach’ which the Hebrew dictionary defines as an ‘anointed or consecrated’ person. Hebrew priests and kings of the Old Testament period were anointed (ceremonially rubbed with oil) before they took up their office, thus they were anointed ones or mashiyach. But certain Old Testament prophetic passages also spoke of a specific mashiyach (with a definite article ’the’) who was prophesied to come. When the Septuagint was developed in 250 BC, the translators chose a word in the Greek with a similar meaning, Christos, which came from chrio, which meant to rub ceremonially with oil. Therefore the word Christos was translated by meaning (and not transliterated by sound) from the original Hebrew ‘mashiyach’ into the Greek Septuagint to refer to this specific person. The New Testament writers understood Jesus to be this very person that was spoken of in the Septuagint so they continued to use the word Christos in their writings to designate Jesus as this mashiyach.

But when we moved to modern-day English, there was no readily recognized word with a similar meaning so Christos was then transliterated from the Greek into English as ‘Christ’. Thus the English ‘Christ’ is a very specific title with Old Testament roots, derived by translation from Hebrew to Greek, and then transliteration from Greek to English. The Hebrew Old Testament is translated directly to English and translators have made different choices in rendering the original Hebrew ‘mashiyach’ into English. Some Translations (like King James Version) transliterated the Hebrew mashiyach to the English word Messiah. Other translations (like New International Version) translated mashiyach by its meaning and so have ‘Anointed One’ in these specific Old Testament passages. Because we do not see the word ‘Christ’ in the English Old Testament this connection to the Old Testament is not readily apparent to us. But from this analysis we know that the Biblical ‘Christ’=’Messiah’=’Anointed One’ and that it was a specific title. The original Greek readers of the New Testament would have directly seen the Christos from the Septuagint and would have seen the direct connection, while we have to dig around somewhat to see it.

The Christ anticipated in 1st Century

Armed with this insight, let’s make some observations from the Gospel accounts. Below is the reaction of King Herod when the Magi from the East came looking for the king of the Jews, a well-known part of the Christmas story. Notice, ‘the’ precedes Christ, even though it is not referring specifically about Jesus.

When King Herod heard this he was disturbed, and all Jerusalem with him. When he had called together all the people’s chief priests and teachers of the law, he asked them where the Christ was to be born. (Matthew 2:3-4)

You can see that the very idea of ‘the Christ’ was already commonly accepted between Herod and his religious advisors – even before Jesus was born – and it is used here without referring specifically to Jesus. This is because ‘Christ’ comes from the Old Testament, and it was commonly read by Jews of the 1st century (like Herod and the chief priests of his day) in the Greek Septuagint. ‘Christ’ was (and still is) a title, not a name. From this we can dismiss right away the ridiculous notions that ‘Christ’ was a Christian invention or an invention by someone like Emperor Constantine of 300 AD popularized by movies like Da Vinci Code. The term was in existence hundreds of years before there were any Christians or before Constantine came to power.

Old Testment prophecies of ‘The Christ’

In fact, the term takes on a definitively prophetic title already in the Psalms, written by David ca 1000 BC – far, far before the birth of Jesus. Let’s look at these first occurrences.

The kings of the earth take their stand … against the LORD and against his Anointed One … The One enthroned in heaven laughs; the Lord scoffs at them… saying, “I have installed my King on Zion, my holy hill.” I will proclaim the decree of the LORD : He said to me, “You are my Son; today I have become your Father. …Blessed are all who take refuge in him. (Psalm 2:2-7)

The Greek Septuagint was far more widely read than the Hebrew in the first century (for both Jews and Gentiles). Psalm 2 in the Septuagint would read in the following way (I am putting it in English with a transliterated Christos so you can ‘see’ the Christ title like a reader of the Septuagint could)

The kings of the earth take their stand … against the LORD and against his Christ … The One enthroned in heaven laughs; the Lord scoffs at them… saying …, (Psalm 2)

You can now ‘see’ Christ in this passage like a reader of the 1st century would have. But the Psalms continue with more references to this coming Christ. I put the standard passage side-by-side with a transliterated one with ‘Christ’ in it so you can see it.

The Old Testament prophecies: Specified like a lock of a lock-n-key system

The fact that the Old Testament writings are explicitly predictive of the future makes them stand in very small company across the vast sea of literature that has been produced through human history. It is like the lock of a door. A lock is designed in a certain shape specification so that only a specific ‘key’ that matches the specification can unlock it. In the same way the Old Testament is like a lock. We saw that the specifications are not just in these two Psalms I looked at here but already we have seen others in the posts on Abraham’s sacrifice, Adam’s beginning, Moses’ Passover, and Daniel’s coming Son of Man (please review if they are not familiar).  Psalm 132 adds the specification that ‘the Christ’ would be from the line of David.  So the ‘lock’ has specifications that can be seen to become more and more precise as we survey the prophetic passages across the Old Testament. Given that, here is a question worth asking:  Why is ‘Christ’ so anticipated and so central in both the Old and New Testaments?  In finding the answer you will also see why ‘Christ’ is relevant to you and me today.

11 thoughts on “Where does the ‘Christ’ in Jesus Christ come from?”