In the previous post I looked at how the trial of Abraham’s sacrifice of his son Isaac alluded to the sacrifice of Jesus. About 500 years have now passed since Abraham and it is about 1500 BC. After Abraham died, his descendants through Isaac, now called Israelites, are a vast number of people but also have become slaves in Egypt. This happened because Joseph, great-grandson of Abraham, was sold as a slave to Egypt and then his family followed as explained in Genesis 45-46 of the Bible.

So we now come to a very curious drama centered around Moses and which is told in the book Exodus (so named because it is the account of Moses leading the Jewish Israelites out of Egypt). Moses had been commanded by God to confront the Pharaoh of Egypt and it results in a contest of wills between the two, producing nine plagues or disasters against Pharaoh thus far. But Pharaoh has not agreed to let the Israelites go so God is going to bring about a 10th and most fearsome plague. The full story of the 10th Plague in Exodus of the Bible is linked here and I urge you to read it because it will help you in better following the explanation below.

This 10th plague decreed by God was that every firstborn offspring would die that night except those who remained in houses where a lamb had been sacrificed and its blood painted on the doorposts of that house. Pharaoh’s loss, if he did not obey, would be that his son and heir to the throne would die. And every house in Egypt would lose the firstborn son – if they did not sacrifice a lamb and paint its blood on the doorposts. So Egypt faced a national disaster.

But in houses where a lamb had been sacrificed and its blood painted on the doorposts the promise was that everyone would be safe. Death would pass over that house. So this day was called Passover.

Many who are familiar with this account assume that the blood on the doors was a sign for the Angel of Death. But notice the curious detail in the account.

So, though the LORD was looking for the blood on the door, and when He saw it He would pass over, the blood was not a sign for Him. It says quite clearly, that the blood was a ‘sign for you’ – i.e. the people. And by extension it is a Sign for all of us who read this account. But how is it a sign? After this event happened the LORD commanded them to:

Celebrate this day as a lasting ordinance for generations to come. When you enter the land … observe this ceremony… It is the Passover sacrifice to the LORD’ (Exodus 12:27)

In fact we see at the beginning of this passage that this event inaugurates and launches the ancient Jewish calendar.

This is a modern-day scene of Jewish people preparing to celebrate Passover in memory of that first Passover 3500 years ago.

But to this day, 3500 years later, they continue to celebrate the Jewish Passover Festival every year on the same day in their calendar and eat the seder meal in memory of this event in obedience to the command given then.

And in tracking this celebration through history we can note something quite extraordinary. You can notice this in the Gospel where it records the details of the arrest and trial of Jesus:

“Then the Jews led Jesus … to the palace of the Roman governor [Pilate]… to avoid ceremonial uncleanness the Jews did not enter the palace; they wanted to be able to eat the Passover” … [Pilate] said [to Jewish leaders] “…But it is your custom for me to release to you one prisoner at the time of the Passover. Do you want me to release ‘the king of the Jews’?” They shouted back, “No not him…” (John 18:28, 39-40)

In other words, Jesus was arrested and executed right on the Passover day in the Jewish calendar. Now if you remember from Sign of Abraham’s Sacrifice, one of the titles of Jesus was:

And here we see the drama in this Sign. Jesus, the ‘Lamb of God’, was crucified (i.e. sacrificed) on the very same day that all the Jews alive then were sacrificing a lamb in memory of the first Passover that launched their calendar. This explains the annual timing of two holidays that occurs every year – a parallel that so few of us notice and even fewer ask ‘Why?’. The Jewish Passover Festival occurs most years in the same week that Easter does – check your calendar. (In some years, because of the Jewish leap month cycle they can be a month apart).

Back to that first Passover in Moses’ day where the blood was a ‘sign’, not for God, but for the people.  Now think for a minute about what signs do by considering these below.

Now the Passover account explicitly said that the Sign was for the people, not for God, but it was established by Him – He was the author of it.  So like with any sign, what did He want our minds to think of?  With the remarkable timing of lambs being sacrificed on the same day as Jesus, and given his title ‘Lamb of God’, it must be a pointer to the sacrifice of Jesus.

It works in our minds like I have shown in the diagram here about me. 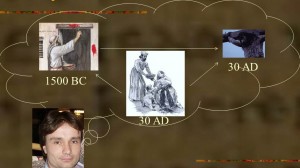 The sign was there to point me to the death of Jesus. In that first Passover the lambs were sacrificed and the blood spread so the people could live. And thus, this Sign pointing to Jesus is to tell me that he, ‘The Lamb of God’, was also given to death and his blood spilt so I could find life.  The meaning of Passover is Jesus’ sacrifice that gives us life.

With Abraham’s sign the place where the ram died so Isaac could live was Mount Moriah – the very same place where Jesus was later sacrificed. That enables us to ‘see’ the meaning of his death by pointing to the place. Here in the Passover we find another pointer to the same event – by pointing to the same day in the calendar – the calendar initiated by this very event.  And a lamb sacrifice is once again used – showing that it is not just a coincidence of any event – to signify the death of Jesus.  In two different ways (through location and through timing) two of the most symbolic and important events in the Old Testament directly point to the death of Jesus. I cannot think of any other person in history whose death (or any important milestone) is so foreshadowed by two similar parallels in such dramatic fashion. Can you?  I do cover some objections in my article here.

We saw in the trial of Jesus that still another title (‘The Son of Man’) from another Old Testament book (Daniel) from another era (Daniel was ca 500 BC – a thousand years after Moses) is literally becoming fulfilled in still another age (the last 300 years or so) through a growing world-wide voluntary worship of him – in large part because of this same death.  We also saw in the background to Pentecost that the Old Testament Feast of Weeks – from that same calendar inaugurated by Moses with Passover falls on, while also pointing to, the day of Pentecost.

Taken together, these foresights should signal to us that there are reasonable grounds to consider that Jesus is the cornerstone of a Divine Plan signaled long ago when mere slaves in Egypt auspiciously inaugurated their new calendar by Signing lamb’s blood onto their doors.

[Click here for this Sign explained to those with an Islamic perspective and an interest in the Prophet Musa’s (PBUH) message.]

17 thoughts on “What was the Passover Sign of Moses?”